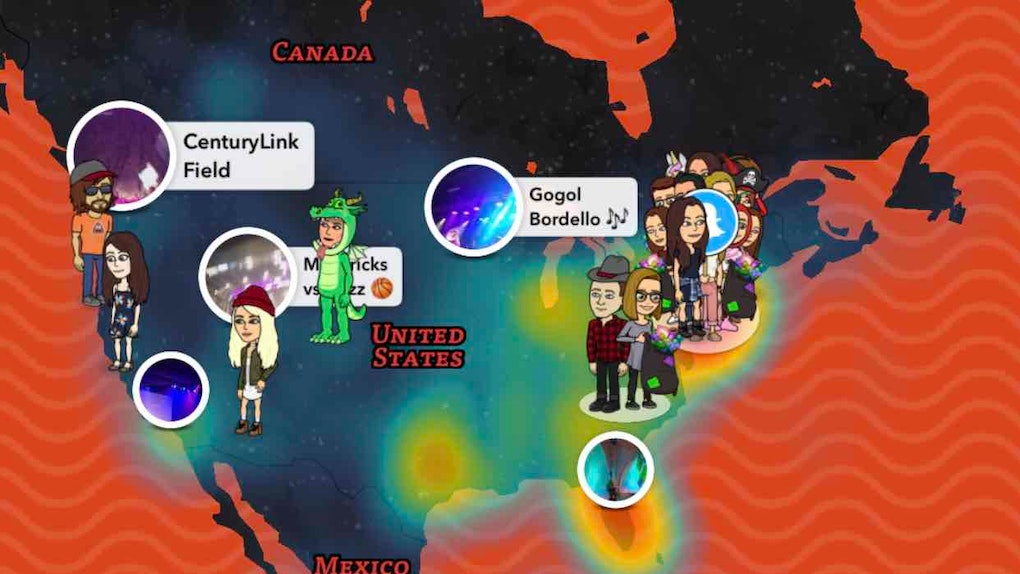 Happy Halloween, my Snapchat-loving friends! Whether you're getting ready to go trick-or-treating or adding finishing touches on your costume for a spooky night out, I'm sure you've been documenting your creepy festivities on Snapchat. If you've been Snapping your friends and checking the app to see what they're doing for the big night, you probably noticed a teeny, tiny change on Snap Map: its color. That's right, Snap Map got a Halloween makeover and it certainly doesn't look anything like the map you've grown accustomed to. In fact, the new colors might creep you out. So, how do you get Halloween colors on Snap Map? Let's find out.

Before we discuss how to get the scary now colors on Snap Map, allow me to show you what the spooky new scenery looks like. For starters, the land is not green and the water is not blue. Instead, Snap Map transformed into a world you might see in a scary dream or an imaginary horror flick. Some might even relate the dark atmosphere to an alternate universe out of Stranger Things (you get the point). Instead of your typical map colors that usually appear on the screen, the water on Snap Map is orange and the land is black. In an email sent to Elite Daily, a Snapchat spokesperson referred to the Halloween map as the "Haunted Snap Map," and it's certainly creepy.

Take a look at these tweets. They'll give you an idea of what your Haunted Snap Map will look like when you sign on during Halloween.

If we could see Halloweentown on a map IRL, maybe it would look like this.

"TBH I am frightened."

Now that you've seen Snap Map's Halloween edge, let's talk about how to get the colors on your phone.

To be completely honest, there aren't really any "steps" you need to take. The Haunted Snap Map appeared on my Snapchat app automatically on Tuesday, Oct. 31, and is currently available to all Snapchatters throughout Halloween. To get the spooky map, I followed the normal steps you'd take to open Snap Map any day of the year. If you forgot how to get there, I can give you a quick reminder.

First, you need to open Snapchat. Once you've completed the obvious, you must get to the camera and then use two fingers to pinch the screen. After you pinch the screen, you'll be spooked to find the Haunted Snap Map waiting for you. It's literally that easy! Just open your Snapchat app, get to Snap Map, and you're ready to go.

However, there's more to the Haunted Snap Map than just the spooky Halloween colors. Upon opening the new feature, you might've also noticed your friends' Actionmojis acting a little scarier than normal. Instead of driving around or standing idly on the map, the Halloween Actionmojis are doing things like riding around on broomsticks and trick-or-treating. They're definitely in the Halloween spirit.

According to an email sent to Elite Daily, there's a reason behind your Halloween Actionmoji's spooky new looks. If you're friend is riding a broomstick, that means he or she is probably driving around town. If they're shown as a "zombie walker," that means they might be walking around. However, the trick-or-treating Actionmojis are just the default ones, which means you don't have to be doing anything in particular to be shown carrying a big bag of candy.

Pretty sweet, right? Oh, if you see a group of your friends huddling on the Haunted Snap Map together, there might be a jack-o-lantern, a bowl of candy, or a witches caldron propped next to them. (And if you weren't invited to the party, I'd get your costume on and join in immediately.)

Have fun with the Haunted Snap Map tonight, and try not to get too spooked when you see a bunch of zombie walkers on the app.