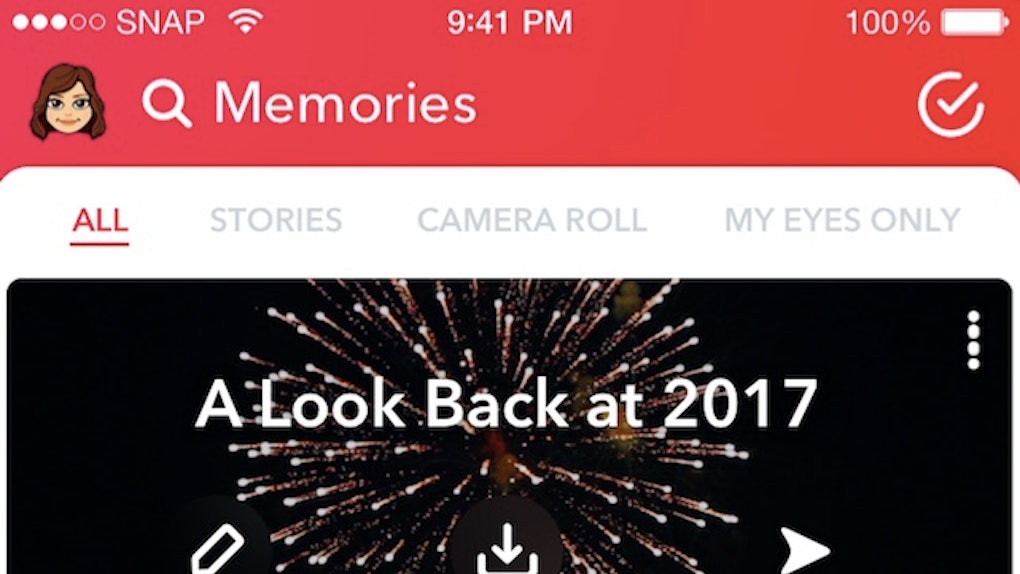 Remember the days when your shelves were filled with homemade scrapbooks and photo albums (complete with all the '90s song lyrics)? Filing away memories was a must when most of your pictures were coming from a recently developed disposable camera. Now, there are so many ways to take pictures right from your phone that you might find yourself filling up your camera roll without taking the time to look back at all the special moments you've captured. One of your favorite apps has the solution to your problem, and you'll be set for a stroll (er, scroll) down memory lane when you learn how to find your 2017 Snapchat Memories Story.

Taking stock of the year you're about to put behind you is a good way to prepare for the new year ahead. Thankfully, Snapchat is making it easy for you to recall your favorite photo memories. On Wednesday, Dec. 27, the app is launching a personalized "2017 Story" for each of its users that utilizes the Memories feature. If you're not familiar, the Memories feature is where your Snap photos and videos go when you save them.

To get ahold of your very own "2017 Story," all you have to do is tap or swipe up on the Memories icon located right below the capture button in the app. Once you're in Memories, the 2017 Story will be at the top of the "ALL" tab — hopefully complete with your best puppy filter selfies.

You can watch your "2017 Memories" and share it with your family and friends.

Your 2017 Story will be tailored to the unique year you've had these past 12 months, as it is created using a combination of markers such as location, date, and captions. If you're feeling creative, you can also harken back to your scrapbooking days and edit your 2017 Story by deleting which Snaps you'd rather not include in the the bunch.

Snapchat is answering a demand from users with the introduction of the 2017 Story, according to spokesperson for Snapchat. Snapchatters have been asking for a way to relive their favorite moments from throughout the year. Now that Snapchat's Memories feature has been live for more than a year (after launching in the summer of 2016), the app is able to go one step further and personalize individual year-in-review type Stories for its loyal users.

Memories is Snapchat's answer to the question of what to do when you want to save your Snap — rather than send it out into the great unknown after eight seconds. You can save individual photos and videos or entire Stories. It appears that Snapchat will be busy creating a lot of 2017 Stories since more than one-third of active Snapchat users swipe into the Memories feature each day. Beyond that, there are tens of millions Snapchatters simply saving Snaps to their Memories.

2017 has definitely been a whirlwind of year, so it's nice to know that you have a place to go to look back on the special moments you've captured this past year.

Don't forget that Snapchat also introduced a lot of fun new features throughout the year. So, you'll also get to relive all the Snaps that you felt were worthy of the Snapchat dancing hotdog, or the Snaps in which your very own Bitmoji was getting a virtual caffeine fix or relaxing with some yoga with Snapchat's World Lenses.

A lot can happen in a year, and if you're not keeping track, you could forget about some of the funniest or most special moments. With your 2017 Story, you won't have to worry about leaving any of the best memories behind.