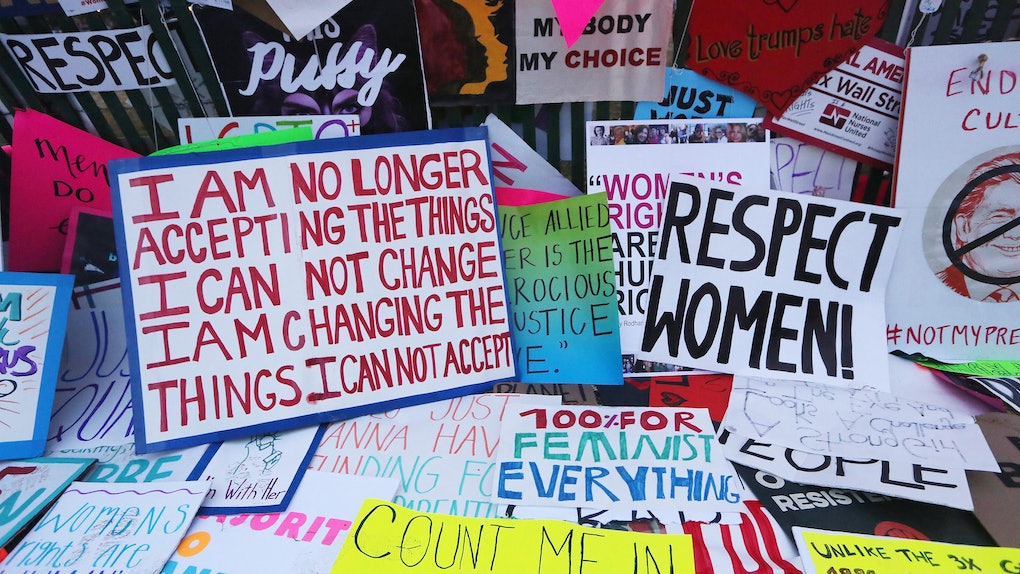 The first year of Donald Trump's presidency was filled with so many frightening policy changes that, frankly, it's been hard to keep up with it all. But one of the central and most aggressive forms of oppression we've experienced so far has been the systemic and deliberate attempt to strip American women of their access to birth control and safe reproductive health care. So, as 2017 comes to a close and you're drafting your new year's resolutions, make a promise to yourself, and to others, that you will learn how to fight for reproductive rights in 2018 better, harder, and more vocally.

If this seems like a big task to take on, fear not: I've created a list of ways in which you can best educate yourself and advocate for reproductive rights in the coming year, all with the help of some truly fantastic, inspiring people at the Center for Reproductive Rights.

The Center for Reproductive Rights is a legal powerhouse fighting unjust, arbitrary, and harmful laws that deny women the ability to be in charge of their own bodies. Around the world, the Center for Reproductive Rights works to ensure young girls are not forced into marriage, women have the right to life-saving obstetrics care, contraception is available and affordable, and abortion is safe and legal. In the U.S., for example, the Center recently worked to strike down a Texas ban that aimed to prevent women from getting safe abortions for pregnancies after 15 weeks.

The bottom line is this: The fight for control of your body, your rights, and your birth control has only just begun. It's time to roll up our sleeves, do some stretching exercises, and get into it. Here are 10 things you can do to fight for your reproductive rights in the new year.

1. Know What Rights You Have In The First Place

Before you make any moves to march, tweet, or call your representative, ask yourself this: Do you know what type of reproductive care and birth control access is already available to you?

In an exclusive interview with Elite Daily, Vivian Siu, the CMO at the Center for Reproductive Rights, says the first thing to do is educate yourself on your state's restrictions on abortion and contraception, and find out what exactly you're covered for. If your health care is covered under the Affordable Care Act, you can check out your coverage plans here, or you can contact your health care provider and see what type of birth control and reproductive access you have, and how much you have to pay for it.

2. Address, And Embrace, An Intersectional Fight

For too long, women's liberation movements have been splintered via racial divides and socioeconomic disparity. This, according to Siu, has to change.

The reproductive rights community in the United States has finally begun to embrace a broader set of intersectional issues. In an exclusive interview with Elite Daily, Destiny Lopez, the co-director of All* Above All, a non-profit dedicated to restoring and sustaining abortion coverage for low-income woman, notes that young women of color have been working to end the Hyde Amendment, which prevents federal funds from paying for abortion unless it is to save the life of a woman. She urges all women to "keep writing to our legislators, state and federal, keep marching, keep signing petitions, and sending postcards."

In 2018, make it a point to pay attention to leaders from different communities, who come from a different cultural background than you do. Before you speak, listen. Before you form an opinion, read books and absorb stories that are different from your own. Everyone grows up with a set of biases and ingrained behaviors based upon where they've been raised and by whom, and that's OK; what matters is recognizing your bias tendencies, and working to override them as best as you can.

3. Fight The Spread Of "Fake News"

Plot twist! "Fake news" is a catch-22: The person who coined the phrase is the one who spews inaccuracy, yet the publications he accuses of inaccuracy are far more accurate than he is.

At the same time, Siu insists, the Trump administration is doing "everything it can to destroy our health care system and threaten the health and well-being of women who depend on essential preventive care services, including no-copay birth control provided under the ACA."

The best way to fight the "fake news" industry is to intentionally, articulately, and consistently spread relevant information to your community. This means remembering the single key to spreading information and making it stick: sourcing your facts. You can check out the CRR's latest State of the States report for a full breakdown on where each state currently stands regarding access for contraception and abortion providers.

4. Tackle Legislation From Both A Top-Down And A Bottom-Up Approach

Democracy is a complex and massive bureaucratic machine, for better and for worse. At any given time, there are councilmen, congressmen, senators, governors, and presidents working to help or to hurt reproductive rights.

Challenge yourself to keep your perspective zoomed out. Keep track of President Trump's movement, as well as the health and safety of the reproductive movement in your local area. If it feels overwhelming, write it all down on a list: all of the politicians, from local to national jurisdiction, who impact your access to safe health care and birth control.

Once you have the list, keep track of what they're doing (or not doing) for you, and then you can target your communication in the best possible direction.

5. Keep The Pressure On Your Reps

"Keeping pressure on representatives through email and phone calls is another effective way to contribute to the cause," Siu explains. While you're calling, make sure to "ask your senators and representatives to support the Women’s Health Protection Act, a bill which prohibits severe and dangerous restrictions on abortion and ensures women have access to this critical care."

Another way to make your voice heard, Siu notes, is in support of the Protect Access to Birth Control Act, which would "reverse the dangerous Trump administration regulations that allow employers and universities to deny their employees and students coverage of birth control."

There are plenty of ways to support nearby clinics. On a base level, a donation is always an easy way to contribute if you're not sure you have the hours to physically commit otherwise. The donation page for the CRR can be found here, because what better way to greet the new year than by supporting a team of lawyers who are fighting each and every day for your reproductive rights?

If you're looking for a more hands-on type of involvement, you could volunteer as an abortion clinic escort (a person who helps women enter and leave the clinic safely, and protects them from protestors), or you could sign Planned Parenthood's petition and pledge to be a clinic defender.

The best thing to do is contact your local clinic and ask how you can help them do their jobs, and how you can assist them in keeping the clinic up and running. (It wouldn't hurt to throw in a quick thank you to them, as well).

7. Get To Know Your Rights, And The People Trying To Take Them From You

It's not enough to keep track of the senators who are fighting for you. It's just as important to know the politicians who are breaking their promises to constituents, and allowing dangerous laws regarding contraception and abortion to pass through the House and Senate.

This year, get to know the bastards as well as the heroes. If we know who they are, then it's easier to make a point to keep them from re-election in the coming years. Democracy is power — but only if you pay attention.

Just kidding, except not really, because President Trump has launched a massive smear campaign against some of our best and most significant sources of journalism in the country.

In 2018, devote your time to fighting back. Support the people who give you the information that allows you to stay informed. The New York Times monthly subscription is currently 50 percent off for one year as a holiday purchase. Now is the perfect time to commit to supporting newspapers, online publications, and all of the sources in your life that contribute to your ability to stick it to the man.

Oh, and maybe tweet out a thank you to some of those influencers you follow who keep you up to speed, because it's not easy living on Twitter. (I'm looking at you, Lauren Duca).

In a 2016 interview with Vice, president of Planned parenthood Cecile Richards eloquently stated,

I have seen elected officials in office, who may have been elected by saying that they were completely against abortion rights, change; and it's really happened because they have heard the stories of women—women in their own families, women constituents—who have told them about their situations.

When people can develop empathy for others, it really helps break down this very rigid formulation that is essentially political.

Empathy is the name of the game, people. Share stories if you have them, and more importantly, listen to the stories of others, even those that come from the other side of the political aisle.

10. Treat The Fight Like A Marathon, Not A Sprint

Here's the bittersweet news: Becoming informed about these issues is not equivalent to turning on a light switch. You won't see change overnight, but once you do choose to "switch on," you will spend the rest of your life paying acute attention to the legislation changes, the political endeavors, and the politicians who literally play tug of war with your rights.

The fight for reproductive rights is a marathon, not a sprint. Take a deep breath, go to a yoga class once in a while when you need a breather, and always remember that you are one individual in a massive, brilliant community of people fighting alongside you.

More like this
These 40 Clever Vaccine Selfie Instagram Captions Deserve A Shot On Your Feed
By Rachel Chapman
10 Fun Outdoor Spring Fitness Activities You Can Do In Your Own Backyard
By Marisa Casciano
April 12, 2021 Will Be The Worst Week For These Zodiac Signs
By Roya Backlund
Stay up to date