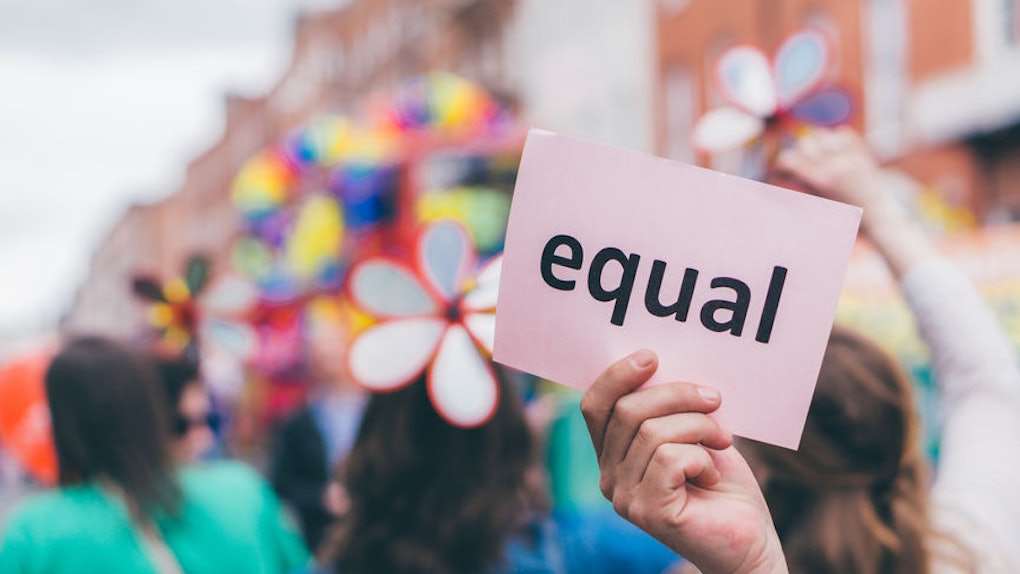 How To Fight For LGBTQ Rights On Coming Out Day 2019

Oct. 11, 2019 marks the 31st anniversary of Coming Out Day, a national, annual awareness day aimed at raising the voices of those in the LGBTQ community and highlighting their experiences. On this day, we celebrate those people who have courageously come out. It's also a stellar time to turn your support into action. Wondering how to fight for LGBTQ rights? Whether you’re a straight ally or a member of LGBTQ community, there are plenty of ways that you can make a difference on Coming Out Day.

Indeed, there have been some significant strides toward equality in recent years. In 2017, a record-breaking 68 out of 506 American cities earned perfect scores for advancing LGBTQ-inclusive policies and practices, according to a report by the Human Rights Campaign Foundation and the Equality Federation Institute. Specifically, the organizations highlighted progress on transgender equality: 25 cities revised their employee health care plans to cover health services for transgender citizens. While just five U.S. cities offered these services in 2012, that number surged to 111 cities nationwide in 2017. On top of that, more cities have modified administrative policies to squash discrimination — 18 cities updated their equal employment opportunity policies to include sexual orientation and gender identity. While acceptance of the LGBTQ community is increasing around the world, however, there have also been many setbacks — meaning there is still much work to be done.

Given the current political climate, taking action can sometimes feel overwhelming. Fortunately, there are a number of approaches you can take to fight for LGBTQ rights, and Coming Out Day serves as the perfect time to do so. Whether you're a member of the community or an ally— here are few ways you can aid in the effort to bring about positive change, according to Clare Kenny, GLAAD Director of Youth Engagement.

Here’s a startling fact: It’s still legal on a federal level to discriminate against a person for their sexual orientation or gender identity. Obviously, this complicates a lot of aspects of LGBTQ individuals’ daily lives, including getting insurance, finding housing, applying for college, and landing a job.

"All people, LGBTQ and allied, should commit to learning more about the issues the most marginalized members of our community face," Kenny tells Elite Daily.

While our country’s civil rights laws already protect people from discrimination on the basis of race, color, national origin, sex, disability, and religion under Title VII, The Equality Act would amend existing law to provide non-discrimination protections for LGBTQ people. This bipartisan act, which was introduced in 2015, had 241 original co-sponsors — a new record for the most congressional support any pro-LGBTQ legislation has ever gotten upon introduction. A number of big companies, including Facebook, Google, American Airlines, and Ben & Jerry's, support the Equality Act. And in May of 2019, it was passed by the House of Representatives. But in order for it to become a law, it must still be taken up by the Senate.

Fortunately, you can show your support by adding your name to the list of Americans calling your senators and encouraging them to pass the Equality Act.

Pledge to vote in the off-year elections.

The 2019 municipal elections may not seem nearly as significant as the presidential cycle of 2020, or the midterm cycle of 2018. But that doesn’t mean you should overlook this cycle — it includes the gubernatorial elections in Kentucky, Louisiana, and Mississippi, state legislative elections in Louisiana, Mississippi, and Virginia, and special elections for the currently vacant seats in the U.S. Congress, as well as a slew of mayoral races, citizen initiatives, and other local elections.

One of the most concrete ways you can get involved is by casting your vote — especially since the turnout at these off-year elections always tends to be lower than it is for the presidential year and midterm elections.

“This National Coming Out Day, show your LGBTQ friends you care by registering and pledging to vote,” says Kenny. “Far too many young people take for granted that we have grown up in a more accepting America for LGBTQ people by not voting for progressive candidates or by voting at all."

You can vote in several different ways: in person at a polling station, or by mail with an absentee ballot if you’re unable to go to your registered polling station. In some states, you can even vote early to avoid the Election Day lines.

In 2019 alone, there have been dozens of anti-LGBTQIA+ bills have been proposed across the U.S. Some of them have already become laws.

Basically, the LGBTQ community is up against a concerning wave of wave of legislation that’s hindering their efforts to achieve equality.

"Civic action is still necessary in order to achieve LGBTQ equality and acceptance in every corner of the country," explains Kenny.

Scope out the Human Rights Campaign’s list of resources on state-by-state protections against discrimination to find out how you can get involved by volunteering in your own state.

Stop bullying in its tracks.

Bullying is a major problem for young people in the LGBTQ community — studies have shown that these youth are nearly twice as likely to be verbally harassed, physically assaulted, sexually assaulted, or called names at school compared to their homosexual, cisgender peers. According to Mental Health America, LGBTQ youth have named bullying as the second most important problem in their lives, right after a lack of acceptance from their families.

Even more concerning is the fact that with each incident of harassment, the risk of self-harm among LGBTQ youth becomes 2.5 times more likely, according to Mental Health America. On top of that, LGBTQ youth are four times more likely to attempt suicide than their straight counterparts, according to the William Institute. Unfortunately, many states and school districts still aren’t doing much to prevent this. In fact, only 20 states and the District of Columbia have anti-discrimination or anti-bullying laws to protect LGBTQ students, and roughly 55% of LGBTQ youth live in states that with no laws that shield them from discrimination.

If you found those statistics to be worrisome, shocking, or downright unacceptable, look into how you can do your part to stop bullying. Additionally, recall that bullying isn't only an issue among kids — stand up to those who belittle others by attempting open up a dialogue. Enter a conversation from a nonjudgemental place, and defend voices that are often marginalized and not given a platform. Additionally, consider seeking out support groups, resources, or counselors for advice.

"Transgender people, queer people of color, bisexual people, and queer women face are often subjected to discrimination for a multitude of reasons in addition to their sexuality," says Kenny.

Find out more about your state’s anti-bullying laws and policies. Locate an Anti-Violence Project in your area — this group addresses the pervasive problem of violence committed against the LGBTQ community through educational programs and training. You can also find out more about university anti-violence and crime prevention programs through Stop the Hate.

It’s easier than ever to connect with your local representatives now that the internet provides contact information for them — take advantage of that reach out to voice your support for LGBTQ rights. Believe it or not, this simple act can actually make a difference. According to a 2015 survey of senior congressional staffers, personalized emails and letters are more effective than the telephone in terms of influencing lawmakers’ opinions. So it may be worth the time and effort to put your support into writing rather than dialing their office. First, make sure you’re up to date — the HRC offers a state-by-state overview of news surrounding LGBTQ issues.

By the way, on the eve of National Coming Out Day (Oct. 10), it's worth tuning in to the Human Rights Campaign Foundation's primetime Democratic presidential town hall, which will focus specifically on LGBTQ issues. The candidates who are participating, including Joe Biden, Pete Buttigieg, Julián Castro, Kamala Harris, Amy Klobuchar, and Elizabeth Warren, will share their plans to promote equality, as well as take questions from journalists and audience members regarding their specific LGBTQ concerns.

We still have a long road ahead of us in achieving equality — so your participation in the fight for LGBTQ rights is more crucial than ever. Kenny recommends visiting GLAAD’s transgender resources, bisexual resources, and Spanish-language and Latinx resources pages to learn more about the wide range of issues that LGBTQ individuals face. Once you have a stronger sense of the challenges that the LGBTQ community currently faces, you'll be better equipped to fight for their rights on Coming Out Day.

Remember: Coming Out Day is just one day, and while your participation is valuable, it's imperative that you take up this fight beyond Oct. 11. With every action you take, you could potentially be helping LGBTQ receive equal opportunity and treatment as their peers.