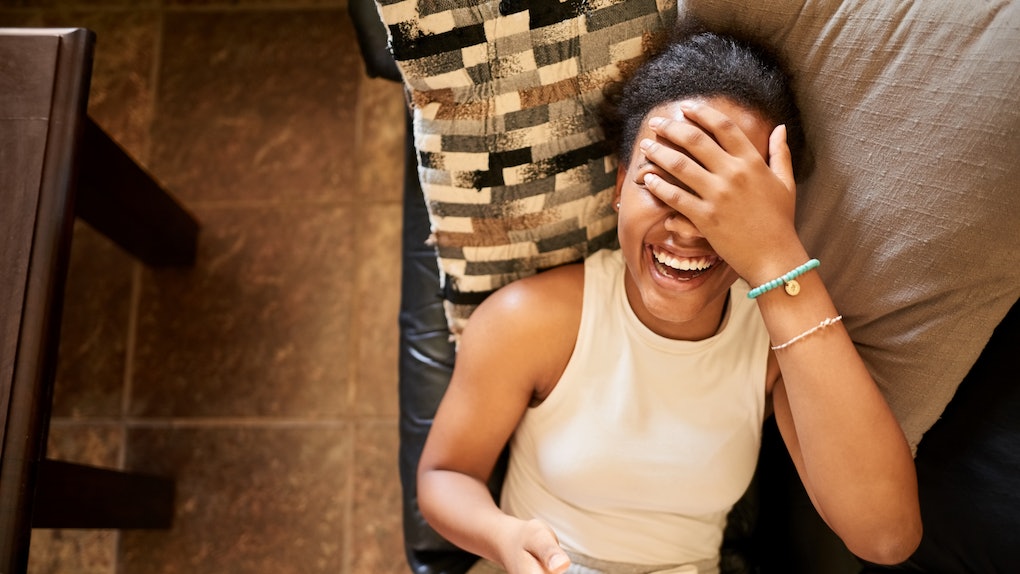 If you've ever gotten a lackluster text, like a simple "k" response, TikTok has found a way to turn that into something truly hilarious. It's like taking a lemon and making some LOL-worthy lemonade out of it. So, if you've got a few less-than-stellar text conversations in your phone, it's time you joined in on the fun and learned how to do TikTok's inspirational quote trend for yourself.

Right now, you may find the inspirational quote trend all over your "For You" page. It's where people take the hilarious texts they've received from loved ones and use them to make inspirational quote pictures. It's all set to the iconic song "A Thousand Miles" by Vanessa Carlton, which only makes this trend even better. Since it works best with your most uninspired quotes, a lot of TikTokers are using this trend to showcase some things their partners have said to them or disappointed texts they've gotten from family members. But you can truly do this trend with anyone's words.

After picking your texts, Photoshop or use an inspirational quote maker online to copy and paste the words into images of gorgeous flower fields and beachy sunsets. Once you have those images saved, it's time to start recording. Click on "Add Sound," and find "A Thousand Miles" to use in your video. For the first 10 seconds of the song, record a video of the person whose texts you will be showcasing or just a video of yourself. You can even use an old video in your camera roll using the green screen video effect.

If you're always thinking about what you're going to eat next, you'll really relate to TikToker Brittany's (aka @tacobellqween) version of this trend. This video features texts with Brittany's brother that are all about dinner. You may actually want an inspirational quote picture on your wall that says, "Dinner is ready."

2. Things This Teacher's Students Have Said

Kids truly do say the darnedest things. Take TikToker @mrwilliamsprek's inspirational quote TikTok for example. In his video, he used things his students have said to him as inspirational quotes, like "your breath always smells like farts." It's harsh, but very funny.

3. Things Your Boss Has Said To You

Raise your hand if you're someone who's always afraid they're going to be fired from their job. Well, if you are, you must follow TikToker @rod. Rod has tons relatable millennial content, especially about work-life anxiety. That theme continues with this inspirational quote trend featuring things Rod's boss has said that would make anyone feel like their about to get fired.

4. Texts From A Teenager

If you went back and looked at the text conversations you had with your mom, you'd definitely relate to TikToker @mboulukos' video. It features some gems like "ugh mom" and a very short "what" that really show off that teen angst vibe you know all too well. Watching this TikTok will make you LOL and then want to text your mom something sweet.

Let's face it, dads tend to get a bad rap for being not the best texters. If you're used to getting a one-word response from your dad, you'll definitely relate to TikToker @laurab91x's video. It features some common dad responses, like "nice" and "ask mom."

6. Texts From This TikToker's Sister

One of the benefits of having a sister is being able to share clothes. That only goes wrong if you don't ask first before sharing, like TikToker @victoriahammett did. She borrowed her sister's dress without asking, and in return, got these hilarious texts that were turned into super relatable inspirational quotes.

7. Texts From A Postmates Driver

If you've ordered from Postmates before, you may have gotten a few texts from your various drivers. TikToker @colleen decided to turn those texts she's received from her Postmates drivers into inspirational quotes for this trend, and it's hilarious. While something like "I'm outside your house" seems scary, it looks beautiful as an inspirational quote.