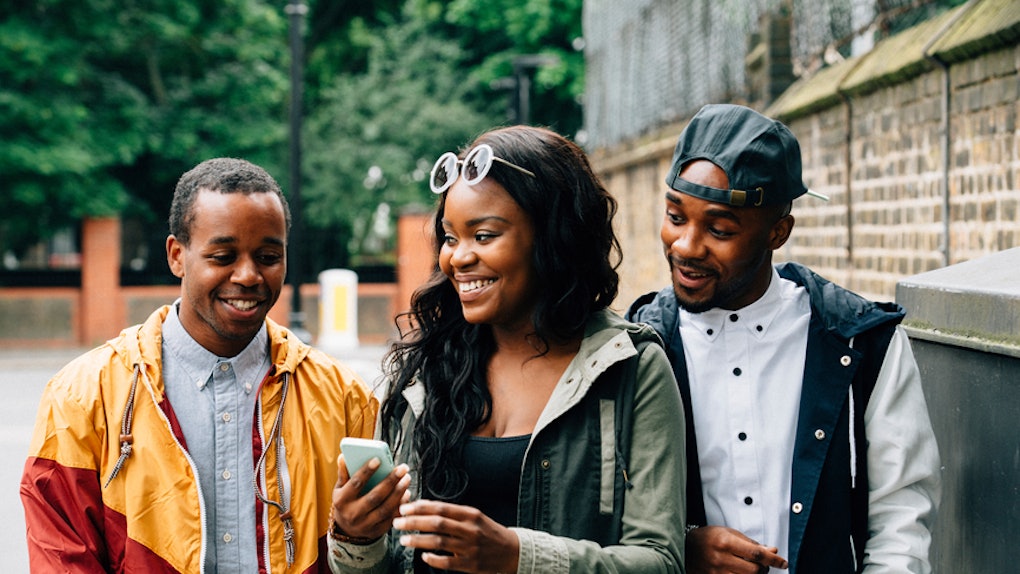 How To Come Out As Poly To Your Parents & Friends, According To 6 People Who Did It

Inch by inch, pop culture and the ~mainstream~ dating world have caught onto the idea that relationships come in all shapes and sizes. For far too long, society alienated all couples or groups who didn't seem to align with our (very limited) idea of what a relationship should look like ("one man, one woman" my *ss). But we're finally coming around, you guys. Pushing past the boundaries of monogamous, heteronormative relationships! Celebrating that love is love! And yet, I'd imagine that coming out as polyamorous to your family and friends can still be a nerve-racking experience for some.

If you've recently entered into a polyamorous relationship with your partner (or partners), and are wondering how to break the news to those closest to you, remember that this is no big deal. Polyamory is awesome, way more common than many people realize, and — if you're feeling fulfilled in a poly relationship — it's something that your loved ones will likely be thrilled to hear about. They'll probably have questions, yes, but they'll probably stem from a place of curiosity, not skepticism.

For a real break down on how best to come out as poly to your fam and friends, peep the six polyamorous guys and gals below who have all done exactly that (thanks, Reddit!).

Treat it as no big deal (because really, it isn't).

Most people will only treat it as a big deal if you do. Generally, I mention another partner from the one they know, or going on a date or something, and they stop a minute and say, 'Aren't you dating your partner anymore?' Then I'll clarify that we have an open relationship or that I'm poly. The response then is either nonchalance, stating that's cool but they could never do it themselves, or curiosity and a lot of questions. It probably helps to clarify if you are or aren't happy to discuss it. Some people are burningly curious, but don't want to come across as rude or nosy. Personally, I'm happy to discuss with them, but if you're not, it can help to have some website or something to direct them to to find out about it. Equally, don't overshare if they aren't interested, just carry on with whatever you were discussing before it came up.

I find using 'open' is better received than 'polyamorous' or 'nonmonogamous.' Most ordinary folks, in my experience, confuse polyamoury with polygamy and assume you're in a harem cult. Open marriage, they get.

Drop it into a casual conversation, if you'd like.

I've been experimenting with bringing up poly stuff casually with friends and family, like, 'So today, my MIL [mother-in-law] followed my girlfriend on Instagram...' and so far my friends have laughed about it and we move on. Or, I will mention it in the context of a totally different conversation. I was chatting in the car with my friend one day and I said, "So, X and I are poly, and we're both dating other people, and I'm feeling anxious because his girlfriend is having a party that I don't wanna go to but I feel obligated as a friend... And it's weird because I don't know any of her friends..." So the conversation is about how I don't really wanna go to this party, but it also includes the fact that the host is my partner's girlfriend.

Granted, I'm friends with mostly very liberal people who are at least acquainted with the idea of poly even if they are mono. If most of the people around you are less open minded, it could be harder.

If you're up for the task, you can educate your friends and family and answer their questions.

Told my mum over the phone, because they were coming out to see me graduate and I had a second boyfriend in the picture. They're not religious, pretty lefty people, and they've known for about two years [now]. At the time, my mum seemed most concerned that I could be putting my health at risk by sleeping around, which I wasn't doing, and was fine letting her know that. My mum mused a bit on how jealousy got in the way of her being friends with men in her previous marriage, and my dad said something about it seeming like science fiction.

They don't really inquire or opine about my relationships in general, but they're definitely in the supportive camp when it comes up. Very grateful, very lucky.

Remember that even eight-year-olds are capable of getting it — so the adults in your life are, too.

I treat it as 'no big deal.' When I first told my kids, they were 3 and 8 (or so) and I was like, 'You know how Joe is my boyfriend? Well, Jane is my girlfriend, too.' Older kid was like, 'Cool, whatev.' He's now 13 and has said when he plans to date, he will probably be poly. My younger child and I have had several conversations over the years about it, with me reminding her that yes, a person is allowed to have two boyfriends. She is now 8 and thinks dating is gross. She sees that my partner (their stepdad) and I are unusual because we occasionally go on dates with others, but doesn't care much because it doesn't impact her life. She also talks about how all families are different — she has four parents, some kids have two or even one... Being poly is just another way for families to be different.

If all else fails, throw in a little "LOL."

I was talking about my boyfriend at work a lot, so my new work friend knew I had a BF. Eventually days or weeks later, she was talking about how she met her fiancé on a dating app. I was like, 'Oooh, really? I should join too!' And she was like, '...But you have a boyfriend.' And I totally didn't mean to out myself, so I just got really red in the face and said, 'Um, yeah but we see other people too.' Thank god she didn't miss a beat and said, 'Oh, open relationship, cool!' Later on, I fully came out as poly and told her my boyfriend had a wife and kids, too, lol.

There's no one right or wrong way to broach the subject with your loved ones. Hopefully, they'll be totally supportive. And if not? At least you tried to be your most honest, authentic self — that's pretty damn impressive.