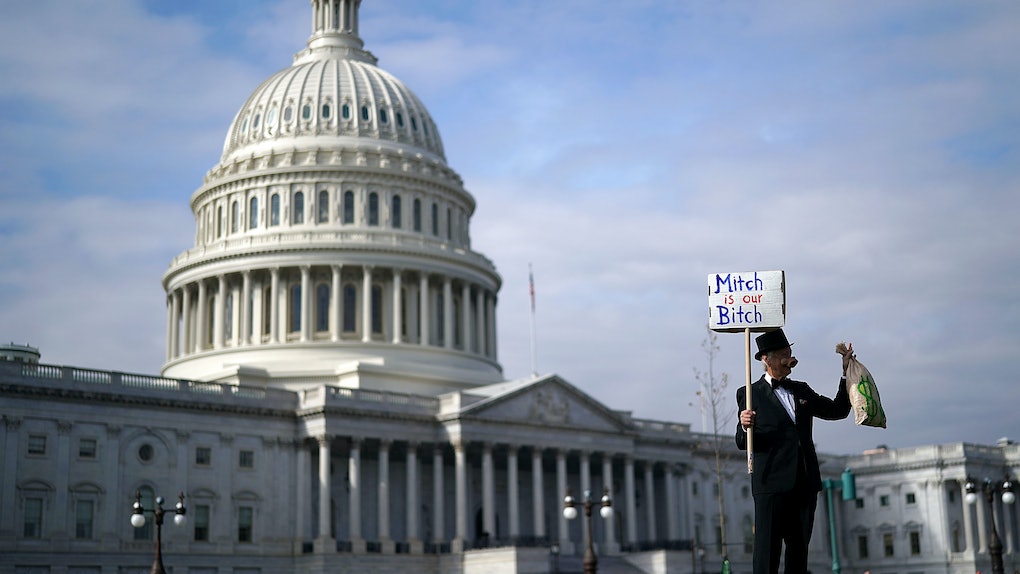 How To Calculate Your 2018 Taxes, Because It’s About To Get Real Confusing

It looks like President Donald Trump had a good Christmas this year after Congress delivered him an enormous gift in the form of a new tax code. On Dec. 22, just before leaving for his holiday at Mar-A-Lago, Trump signed the new GOP tax bill, which means the new tax law will go into effect on Jan. 1, 2018 — though most people won't notice a huge difference until they file their 2018 taxes in early 2019. While there are still many unknown factors, we know enough that you can now, generally speaking, figure out how to calculate your 2018 taxes in order to prepare for the first year of filing in 2019 under the new tax code.

According to Politico, Trump's decision to sign the bill before the new year is causing confusion and "real-world turmoil." The Internal Revenue Service (IRS) and Treasury Department have to write new regulations in order to implement the new law (which, again, goes into effect in five days), and the effect the law will have on individuals is highly dependent on numerous factors, including whether you'll be paying property taxes, buying or selling real estate, and more.

The new tax code is, in theory, simpler than the current code — or, at least, that's how it was sold by Republicans such as Paul Ryan, who helped architect the bill. The new law eliminates several tax brackets, removes the need to itemize deductions by limiting the efficacy of essential deductions such as the Sales and Local Tax (aka SALT, which allows taxpayers to deduct state and local taxes), and more. But the reality is that the more-than-500 page law is so complex that there's no hard and fast rule for how your taxes will change. In fact, many low- and middle-income Americans could see their taxes increase in 2019, to say nothing of when the individual tax cuts expire in 2025.

All that said, here are the best ways to figure out your taxes — and whether they'll go up or down — under the new law.

Use a tax calculator — but know that it won't be perfect.

Far and away, the easiest means of figuring out what your new tax burden will look like is by using one of many online tax calculators. Right now, calculators available through large tax processors like H&R Block still reflect the old tax code (which will be in use when you file your 2017 taxes in April 2018).

But you can find many calculators for the Trump tax plan available for use online. That said, the plan is so complicated that even the most sophisticated and up-to-date calculator designed specifically to predict your taxes under the Trump plan won't be bulletproof.

Marketwatch, for example, has a Trump tax calculator that breaks down estimated taxes for most taxpayers, updated to reflect the final bill. You can get a general idea of what you'll pay whether you're single, married, or a head of household; whether you use standard or itemized deductions; how much you give in charitable contributions; and more.

You'll find similar tax calculators made by CNN and The New York Times. CNN's calculator has a year-over-year breakdown, which is essential for understanding how the expiration of individual tax cuts in 2025 will affect you if Congress fails to reauthorize them.

But these calculators can only do so much. If you really want to get an idea of what your taxes will look like, consider some of the new tax code's other functions.

The new tax bill has been designed to make it more lucrative to use standard deductions instead of itemized deductions. If you're a homeowner, or if you rely on SALT deductions (deducting the money paid toward state and local taxes), you might want to reconsider. The Trump tax plan has put caps on how much you can deduct through these essential itemizations.

But if you do plan on continuing to itemize, check out Investopedia's guide to how different itemizations have changed.

Pre-pay tax obligations if you can.

According to New York Magazine, many homeowners are pre-paying their property taxes before the new law goes into effect on Jan. 1, because the $10,000 cap on SALT deductions will disproportionately hurt homeowners. So if you have any outstanding tax obligations, you should pay them if you can, before the time to take advantage of itemized deductions expires on Dec. 31. (This is especially important if you live in a state with high income taxes, according to NBC News.)

Doing this largely depends on your state and local governments, but you can find out how to do it by either contacting your local government or using some good old-fashioned internet research. For example, the Washington Post has put together a how-to for the Washington D.C. area; NJ.com reported that outgoing Governor Chris Christie is allowing New Jersey homeowners to pre-pay property taxes. You can similarly look for whether or not this is possible in your region by Googling it.

But you could see a difference even before you have to file for 2018.

Depending on your tax bracket and how you file (whether you pay taxes with every paycheck or file quarterly), you could very well see a difference in your take-home pay in weeks — shortly after the IRS and Treasury Department push out new regulations for handling the tax bills. Ryan believes the results will speak for themselves — and change the minds of the 63 percent of Americans who believe the bill will benefit the wealthy and the 55 percent opposed to the bill.

That said, you won't file taxes with the new system this year; instead, you'll file your 2018 taxes in 2019, so you'll have time to prepare for navigating the new tax code. So now is the time to furiously Google how the heck the American tax code will work, for sure. And if you figure it out, let me know.