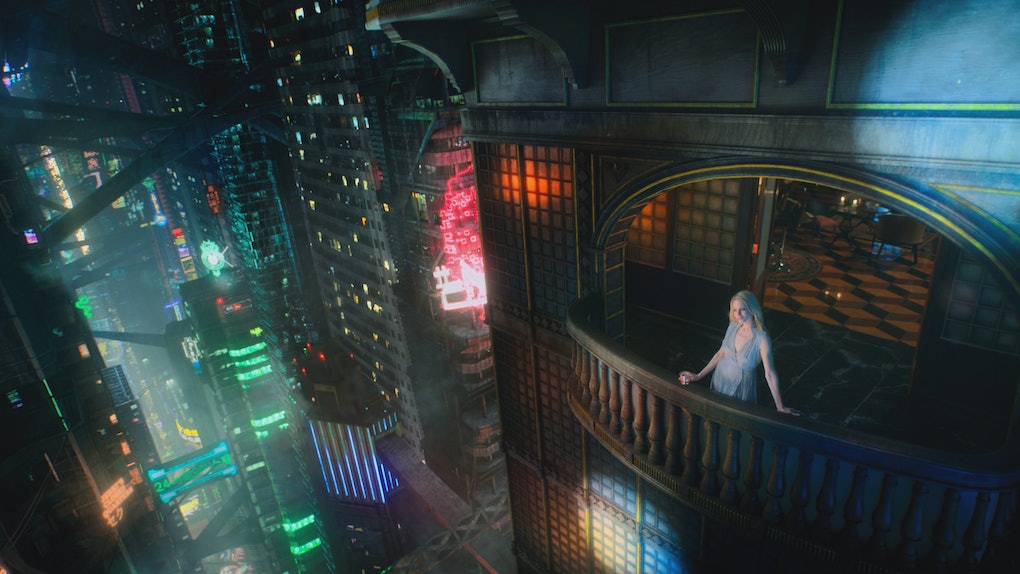 How Scary Is 'Altered Carbon'? Netflix's New Show Is Not For The Faint Of Heart

Netflix recently made a move to start producing at least 50 percent original content a year. In doing so, they've also started pushing their original content much harder than before. Perhaps most don't remember it now, but back in 2016, Stranger Things landed with little more than a tweeted out poster and a few taglines. It's quite the opposite with the streaming service's newest sci-fi offering, Altered Carbon, which is already in the midst of a promotional push ahead of the February debut. So, just how scary is Altered Carbon? Is it more like Stranger Things, in that the lighthearted parts outweigh the scary? Or is it more like Black Mirror, where the horror can overtake the more cheerful bits?

Altered Carbon is an adaption of a 2002 science fiction novel from the cyberpunk sub-genre. Written by Richard K. Morgan, it won the Philip K. Dick Award for Best Novel in 2003. Showrunner and director Laeta Kalogridis then optioned the rights to bring it to screen. But it took until 2018 to get the project done. Why?

The book, shall we say, is hardcore. Entire plot points and back story reveals are based on characters undergoing intensely graphic torture scenes. The violence in the book cannot be understated, even though much of the worst of it happens in "the virtual" instead of "in the real," it is so central to the story, it could not be avoided.

The plot is also insanely complex. A two-hour movie would never be able to communicate anywhere near all of it. A 10 hour TV series can, but even so, it is dense.

To wit, every human had a chip embedded at the base of their skull, their “stack” in which their experiences are recorded. If one has the funds to “resleeve” themselves into endless bodies, they can live for centuries, or forever.

The questions the show raises on how society handles this advancement are profound: Can the soul be downloaded? Should we allow ourselves to die and let the world move on, or should we seize the ability to live every minute we can to the fullest? How does religion handle such a world?

As viewers might imagine, religion does not handle it well. Laws are passed so that "religiously coded" individuals cannot be "spun up" so their souls can rest in heaven. There's also the problem of available sleeves. Early in the series, we see the parents of a murdered child receive her back, as ordered by the court, but the only sleeve available to put her in was the body of an old woman.

Our entry point is Takeshi Kovacs (Will Yun Lee), an elite soldier turned freedom fighter turned mercenary, whose stack has been "on ice" for 250 years. He has been resleeved into the body of a cop, Elias Ryker (Joel Kinnaman), his life purchased by billionaire named Laurens Bancroft (James Purefoy). Bancroft was murdered, just before his every 48-hour upload, so he doesn't remember who did it. Kovacs' mission is to find out whodunit.

At it's heart, this is a Maltese Falcon set in the 25th century world, where the 1 percent don't just have all the money, they have the immortality never to lose it. Kovacs needs to solve the murder to gain his freedom, or find his stack put back "on ice." But the body he inhabits is a wanted man for his own reasons, throwing in extra complications.

Part of the violence problem for the story is that Morgan assumes it inherent to this the world. What is death if the stack can just be resleeved? How cheap can bodies be bought or sold? In some places, the show takes it very far in terms of graphic violence. But if there’s one thing humanity is known for, it’s their tendency towards inhumanity towards their fellow man. The violence is just the logical endpoint.

But when Altered Carbon isn't making The Walking Dead or Game of Thrones look like a garden party, and it focuses on the philosophical arguments, it's one of the most brilliant pieces of science fiction produced in the last decade. How long can one live before they lose their humanity? Just because we can, does that mean we should? Is there a way to put the genie back in the bottle ones immortality has been unleashed?

These are questions our society needs to ask itself as we enter the 21st century and computer technology advances into the realm of AI, and our society becomes even more stratified. This could be Netflix's biggest hit to date. That is, if viewers can get past all the blood.

More like this
Who Did Emily Poison? 'The Handmaid's Tale' Season 2 Is Off To An Intense Start
By Ani Bundel
In 'Riverdale' Season 5, Toni Topaz Is The Black Superwoman Without A Cape
By Erika Hardison
8 Facts About Lisa Delcampo On 'The Circle,' AKA Lance Bass' Assistant
By Rachel Varina
Stay up to date