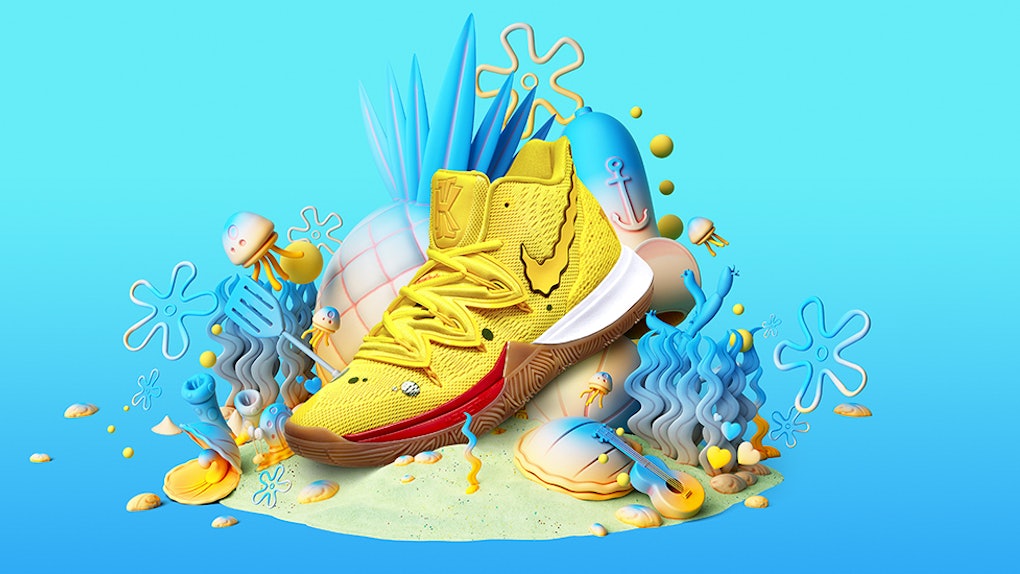 How Much Do The Nike x 'SpongeBob SquarePants' Sneakers Cost? There Are 5 Bikini Bottom-Inspired Styles

Lately, a lot of brands have been dropping nostalgic collaborations I didn't know I wanted or needed, and honestly? My inner child has been living for it. Fortunately, Adult Me has a larger budget than Baby Bella ever had, and now that I know how much the Nike x SpongeBob SquarePants sneakers cost, I'm happy to say I can buy myself my pair of choice. Yes, I'll have to skip a few Starbucks runs, but it'll be worth it! Nike didn't just slap on a Krusty Krab logo and call it a day — they went in on this collection, and there are five incredible pairs of sneakers that pay homage to Bikini Bottom's best.

To be clear, this isn't just Nike x Spongebob SquarePants; it's Nike x Kyrie x SpongeBob Squarepants. Talk about legit! If you don't know, Kyrie Irving is a professional basketball player with his very own Nike kicks, and the brand has taken Irving's signature styles and plastered on color palettes and accents to represent SpongeBob himself, along with his Bikini Bottom pals including Mr. Krabs, Squidward Sandy, Patrick Star, and Plankton. The whole gang and then some!

To be clear, my personal faves are the Kyrie 5 Patrick Star, because I love Star's signature watermelon-esque color palette:

I'm not exactly a sneakerhead, but I know enough to acknowledge that these are bomb. The kicks will retail for $130, and feature pink uppers and lime green soles.

Peep the details meant to resemble that signature starfish ~texture~. So good!

My second fave, again based solely on color palette, are the Kyrie 5 Squidward Tentacles:

Moving right along, we have the Kyrie 2 Mr. Krabs, which quite literally looks like money:

Ironically, the Mr. Krabs sneakers, which have literally dollar bill imagery towards the front, cost less than the aforementioned pairs, retailing at $110. I mean, Mr. Krabs does love a deal! These super unique sneakers have a really shiny red upper, which will definitely make a statement.

Oh, and they also feature a squashed Plankton, which is downright iconic:

Can we talk about my fave squirrel girl next? Take note of the Kyrie 2 Low Sandy Cheeks:

Definitely the most understated option in the collection, these primarily-white sneakers channel Sandy's spacesuit and retail for $110.

Along with her signature pink flower up front, they've also ~got the acorns in the back.~ Yeah, I'm writing my own Bikini Bottom-themed Old Town Road remix, what about it?

Last but not least, the pair you've been waiting for. Behold, the Kyrie 5 Spongebob Squarepants:

Okay, these have to be the most iconic of all. That wavy yellow Nike swoosh! So major. These babies retail for $130, and spoiler alert, they're going to sell out fast, so get 'em while they're hot.

As with all the sneakers, they feature the character that inspired the colorway peeking up from the interiors:

The entire collection drops August 10 at 10AM ET, and if you see me any day after not wearing my Patrick Star kicks, know that they sold out before I had the chance to snag them, and that I now live in eternal sadness, Squidward-style.