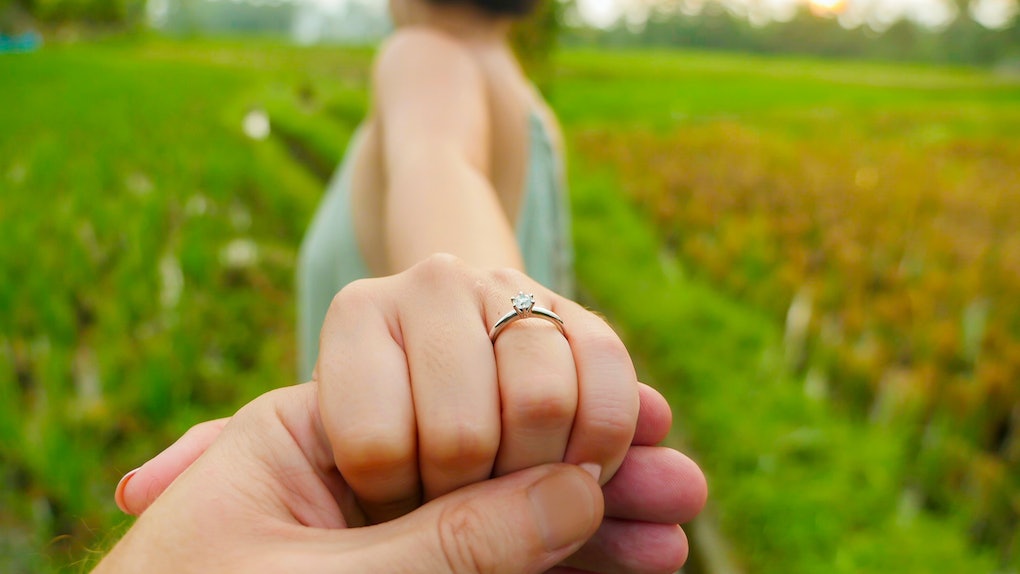 How Much Do Engagement Rings Cost? 15 People Reveal How Much They Spent

Fun fact: The size of the diamond on your engagement ring doesn't determine the value of your relationship. Your ring doesn't even need a diamond. Everyone's taste, preference, and — most importantly — budget is different, and the ring that your partner presents to you (or that you present to your partner) says nothing about your level of commitment. But real talk: How much do engagement rings cost on average? Though the value of a diamond depends on the four Cs (color, clarity, cut, and carat), the cost of the ring depends on a number of factors and, as a result, can vary dramatically.

I had the good fortune of inheriting my own ring from my husband's grandmother, who handed it down to him. Of course, not everyone is lucky enough to have a gorgeous diamond heirloom fall into their lap. Because asking my friends how much their sparklers cost feels as taboo as inquiring about their sex lives, I turned to the good people of Reddit and a Reddit Personal Finance thread to fill me in on the average cost of an engagement ring. I have a feeling you'll be as surprised by the variety of responses as I was.

Went in expecting to pay well over $10k, [and] designed a ring with [my] fiancée that incorporated some small diamonds passed down from her grandmother. Very happy with the overall experience. Ring was appraised privately at $15k, [and] probably would cost way more at a mall. I feel like I got a great deal even though my logical mind thinks it's absurd to pay so much for a shiny rock.

She wishes I didn't spend that much.

Other side is we ended up doing very well financially over last 8 years so [the cost] kinda is a moot issue that has had no negative effect on our financial lives.

We'd already been together 11 years at that point so I was confident it wasn't going to waste.

I certainly never had regrets over the purchase. She loves it, still gets compliments. Obviously I could have spent less and I'm sure she'd have been just as happy but it's all good.

When we started talking about rings and such, I made it clear that I didn't want him spending massive amounts. $5,000 was the absolute limit I gave, but would prefer less. We were each making ~$100k/year at the time, engaged in 2015.

Absolutely worth it! Both our rings are very unique (blue diamonds), have a lot of sentiment attached to them due to how we found them, and we both absolutely adore them. Zero regrets.

$3,500. Was making over 90k at the time, 2012. Perfect amount to spend. Very nice ring, she loves it, no need to spend more. I was carrying a mortgage on my own then... so I didn't have a ton of spare money. I went in every 2 weeks at payday and put down money on that ring.

On a side note, having been through my wedding and helping a number of other people, I feel like there is this pressure to one-up everyone else. Did you get the biggest ring? Best venue? Best invitations? Best photographer? Best caterer? Best honeymoon? etc. Nothing can be just normal/average anymore. Well, eff it, don't get sucked into that. Plan for what you and your significant other can afford and would enjoy. If you can only afford a $1,000 ring, then do it. But don't go and buy a $10k ring if you can't afford it to try and be something you're not. Some of the best weddings I've been to have also been the cheapest.

Absolutely worth it. She would have been happy with a plastic ring if that was what I decided to get her. I looked at a ton of rings, but when I saw the one I bought I immediately knew it was perfect. I didn't tell anyone what I was planning to do, so I am actually pretty proud of the selection I made.

I spent about $2,500 all in on the ring, we had discussed it before and she didn't want me spending more than $2,000 but I knew she would love the slightly more expensive ring.

Worth it? Yes. She loves it. I showed her the other ring I was considering (under $2k) and she's glad I got the one I got.

I think my husband spent about $1,500 when we were 22 or so and didn't make a lot of money. Honestly, I rarely wear it except on special occasions. Occasionally I covet the shiny rocks other women wear, but not often.

We just got married. We budgeted up to $10k on an engagement ring (we make about $200k between the two of us).

Ended up going the non-diamond route — got a beautiful moissanite and custom setting for about $1,200. No regrets whatsoever.

I purchased my diamond for about $700 and the setting for about $300, so all in somewhere a little north of $1,100 once I had the diamond placed.

I got a good deal so I feel it was worth it [and] was making about $47k a year at the time so I wasn't too hard up. Even now though if I was to do it again I probably would have gone a cheaper gem or even cubic zirconia — the fact that it's a real diamond never comes up or really matters to anyone.

900 bucks. I was making $865 a week. Pretty good for my first big kid job out of college. I didn’t know anything about jewelry... and still don’t. Somehow managed to pick one out that she really loved. It is a gold ring with 2 flowers made of rubies and sapphires and each with a diamond in the middle. Also with emerald leaves. She loves it.

Engaged 2-ish years ago. And married for almost 1 now.

Totally worth it. Best wife ever. Would marry again.

We both agreed that spending thousands on a ring made no sense for us at that point in time. We did agree that if we changed our minds we could get nicer bands as a 10-year wedding anniversary when we would have more cash.

4 years into the marriage, my wife barely gets wears her rings because of work and I am more than happy with my $200 ring from Costco.

When my fiancé and I were dating, I read an article about partners deciding together to get engaged, picking out a ring, and splitting the cost. I told him how much I liked the idea and a year or so later we did it. At the time, I made ~$35k and he made ~$50k.

My ring was $800 and it's a beautiful moissanite that everyone (but the jewelry store guy) thinks is a huge diamond [my fiancé] exchanged for a kidney. No regrets over here.

We were young, broke, and sentimental. It was a little handmade silver ring from someone in her hometown. She ended up losing it at a funeral years later and was still devastated about it. We’re not broke anymore, but equally sentimental. I still wear my $7 joke wedding band that was a 'temporary replacement' for the one I lost swimming the year after we got married.

The price doesn’t matter, it’s what it represents. If the price does matter, as in 'spend more please,' it may be a conversation that should be had about priorities and why you want to spend the rest of your lives together.