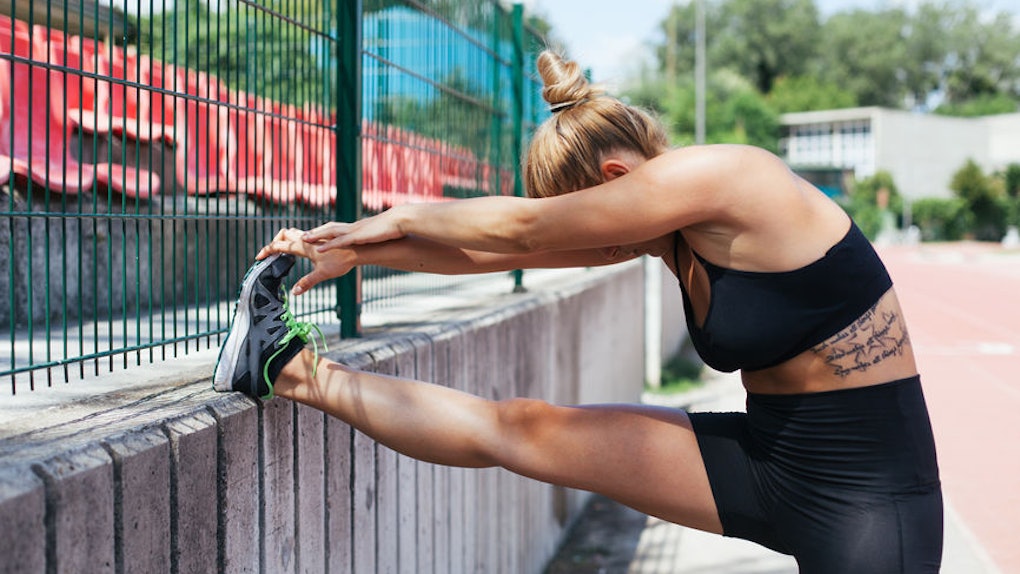 How Many Times Can You Work Out In A Day? Experts Say You Shouldn't Overdo It

Unlike the self-made athlete you see today, Julia in high school was far from athletic. You’ve heard of #TeamCardiNo, right? Well, way back when, I was captain of that squad. Physical activity of any kind was not for me, so when I heard a few of my friends on sports teams talk about grueling two-a-days — aka working out not once, but twice in a mere 24 hours — I felt tired just listening to them map out their schedules. To me, it sounded excessive, because really, how many times can you work out in a day before it becomes unhealthy?

Here’s the thing though, friends: These days, it’s not unusual for me to practice yoga in the morning and lift heavy in the afternoon, so I can see how coaches would want, and see the benefit in, athletes who work out a few times a day. On the one hand, pumping a little extra iron could be helpful in achieving your fitness goals, but it’s important to keep in mind that, no matter what you’re striving toward, there’s always a limit. As wonderful as it is for your body to keep it moving, too much of anything can lead to disaster.

So, fitness goals aside, how many times can you work out in a day before your routine becomes excessive?

Listen, if you want, and have the energy to work out more than once a day, that’s a personal decision, and only you and your doctor can determine what’s right for your individual body. That being said, however, before you start lifting twice a day, or running around the neighborhood once in the morning and again at night, you really should make yourself aware of what’s actually considered a healthy amount of exercise in a 24-hour period.

To gain some perspective, I asked fitness personality and certified personal trainer Katie Austin how often she recommends clients work out during the day, based on her own expertise and experience. The verdict? Anywhere from 30 to 45 minutes of exercise per day is probably an ideal sweet spot.

“I used to work out a lot, as I was an athlete in college, [and] we sometimes did two-a-days, or practiced for up to four hours. Once I stopped playing my sport, I found that it really wasn't healthy for my body,” Austin tells Elite Daily. These days, she says, working out once a day is plenty for her own routine, and that’s because, not only will your body get used to an overly active routine, which will eventually lead to a plateau in your progress, but working out too much “can be really hard on your body" as well, she explains.

Even if you genuinely enjoy your routine and are seeing the results you want, the best thing you can do for your mind and body isn’t to work out more, but instead, to give yourself a well-deserved break.

I know myself, and if I really fall in love with a workout program, or if it feels good to lift heavy, I’m going to want to put in some extra work to push myself further and bask in that surge of endorphins. But even though it’s great to find workouts that you genuinely feel motivated by and excited for, experts agree that overexerting yourself could prove more harmful than helpful in the long run.

“Unless you’re a pro athlete or somebody whose career and well-being is centered around a certain athletic standard, appearance, or role, I do not ever recommend working out more than one time per day,” founder and CEO of Crush Fit, Ben Williamson, tells Elite Daily. This is because over-exercising, he says, can not only lead to physical injuries, but psychologically speaking, it can also lead you to develop an unhealthy relationship with exercise.

The thing is, some tell-tale signs that you're overdoing it (like injury, trouble sleeping, and progress plateau) are a bit more obvious, but the mental health effects can take their toll slowly over time, so you really have to be careful — especially, Austin says, when it comes to the fitness accounts you follow on social media. "Sometimes we see these trainers on social media, or posts on Instagram that make it look like these people are constantly working out," she tells Elite Daily. "But we have to remember that social media is not real life, and [overexercising] is actually NOT good for us. To become addicted to fitness can really harm you and your health."

If, despite all of this, you still want to try working out more than once a day, here's the best way to go about it.

Per the Centers for Disease Control and Prevention's guidelines, "adults should do at least 150 minutes a week of moderate-intensity [exercise], or 75 minutes a week of vigorous-intensity aerobic activity." In other words, if you spread it out, it's really only recommended that you exercise for about four hours or so every week to get your body moving and your heart rate up. Therefore, doubling up likely isn't necessary, and it may lead you to overwork both your body and your mind.

However, if you've talked with your doctor and they've given you the OK to work out more than once a day, who am I to suggest otherwise? Still, there are some best practices to keep in mind when committing to this sort of intensive routine. According to exercise physiologist Jonathan Mike, Ph.D., C.S.C.S., the smartest way to start working out multiple times per day throughout the week is to start slow. So instead of working twice a day, every day, he told SELF, try doubling up twice a week.

What's more, if you're going to work out more than once a day, it's probably a good idea not to work the same muscle over and over again. For example, if you play tennis in the morning, you might want to flow it out with a gentle yoga sequence in the afternoon, so you aren't overworking one muscle group over the other and risking an injury.

Last, but not least, always remember to listen to your body. It always knows best, and if it feels overworked, trust me, you'll know.