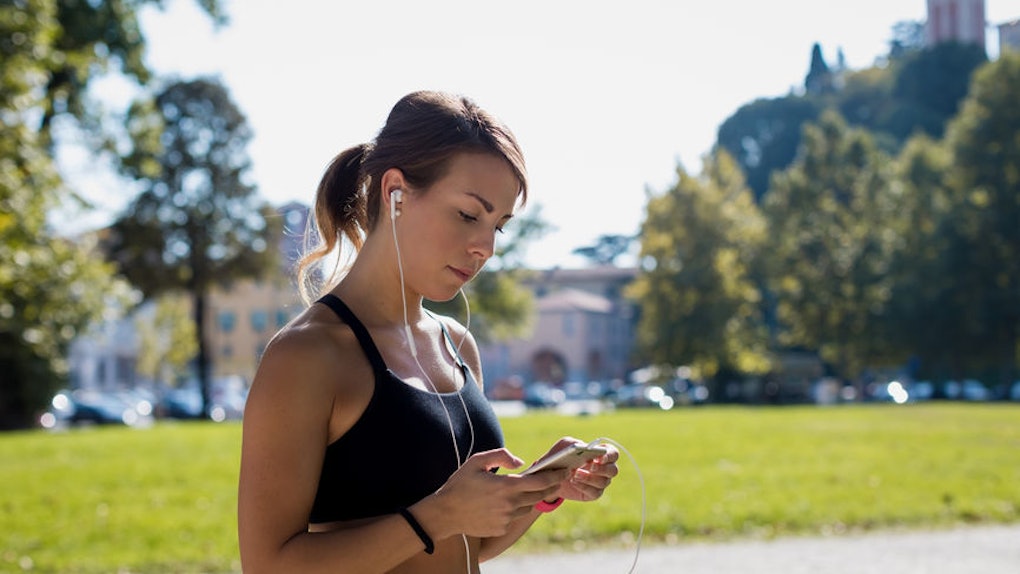 How Long Should A Cardio Workout Be? Experts Say It Depends, So Here's What You Need To Know

Time and time again, I've tried to make peace with cardio. The first memory I have of stepping foot in a gym is a vision of huffing and puffing on the treadmill, and in college, when my roommate invited me to come work out with her, I think what she really meant was, "Let’s spend 45 minutes trying to hold a conversation in between gasps of air on the elliptical." It’s not that these are necessarily bad memories, but sometimes, I wish I knew exactly how long a cardio workout should be, just so I don’t have to waste any more of my precious time struggling for breath and drowning in sweat than I actually need to.

Now, TBH, I don’t hate cardio, but I know a lot of people who do, and maybe that’s because they don’t know much about this kind of exercise. Most people associate cardio with running, and while running is certainly popular, it’s not the end-all-be-all of cardio. In fact, according to founder of Legacy Fit and celebrity trainer, Manning Sumner’s definition, cardiovascular exercise includes any activity that increases your heart rate, plain and simple. So aside from running, examples of cardio workouts might be walking, jumping rope, swimming, rowing, and, he tells Elite Daily, even sex. Not so mad about that now, are ya?

So now that I've covered what the point of cardio actually is, you're probably wondering whether or not you really need it in your life.

I hate to be a heartbreaker for those who’ve joined the ranks of #TeamCardi-No, but as far as Blink Fitness’ PT program manager, Phil Timmons, is concerned, the answer is yes, my dears, you should be doing some cardio in your workout routine if you want to be fit, and more importantly, your healthiest self, both physically and mentally. Timmons tells Elite Daily, “Cardiorespiratory fitness is one of the most important components of health-related physical fitness,” and this is because it’s great for increasing what he calls the three M’s: mood, metabolism, and mind.

Remember those feel-good hormones, otherwise known as endorphins, that Elle Woods talks about in Legally Blonde when she’s making a case for why fitness guru Brooke Wyndham couldn’t have murdered her husband? “Working out gives you endorphins,” she said, adding matter-of-factly, “Endorphins make you happy.” Well, what was originally thought to be just a quirky one-liner, turned out to be a soundbite of wisdom. It’s true, friends: Endorphins do make you happy, and cardio is certainly a good place to start, because even something as little as 10 minutes on the treadmill can release these hormones and make you feel something almost euphoric, like a runner's high. Plus, the happier you are, the less stressed you are, and who couldn't use less stress in their lives?

As for your metabolism and what cardio can do for you physically, Jeff Monaco, the national education manager for Gold’s Gym Fitness Academy, tells Elite Daily, when you do any kind of cardio exercise with the intention of getting your heart rate up, your body takes in a lot more oxygen, which it then delivers to your muscles. When your muscles absorb more oxygen, Monaco explains, their ability to burn fat for fuel, and for the body “to deliver nutrients to the working muscles,” improves. What's more, he adds, cardio increases your body’s ability to use and stabilize blood glucose levels, meaning it can help reduce your risk of developing things like type 2 diabetes, heart disease, heart attack, stroke, respiratory disease, Alzheimer’s, and more.

OK, so cardio is definitely good for you — but how much cardio do you really need to do?

By now, I've hopefully softened that hard lip of yours, and maybe even warmed you up to the idea that cardio isn't the ugly duckling of fitness. The fact is, you need to add cardio to your workout routine if you want to improve your health overall. The question is, how much cardiovascular exercise is required per week — or, better yet, in one session?

Well, there isn't exactly a one-answer-fits-all here (is there ever?). According to Astrid Swan, a celebrity trainer and Barry’s Bootcamp lead instructor, it really depends on two things: your goals and your fitness level. "Cardio should begin and end with a warm-up and cool-down of about three to five minutes. The middle duration depends on your level of fitness," she tells Elite Daily.

It sounds like a lot, because it kind of is, but luckily, there are ways of approaching cardio so that feeling the burn is at least kind of bearable.

According to Manning Sumner, if you're someone who passionately hates cardio, then you're probably doing it wrong — and when I say "wrong," I don't mean incorrectly; you probably just haven't found the specific type of cardio that's right for you. It's really that simple, Sumner tells Elite Daily: "If you hate running, don't run." Instead, he suggests trying something else like rowing, biking, or boxing. The idea here is to basically branch out and experiment with a bunch of different types of cardio until you find the one you love — and trust me, you will find it.

But, let's say you've switched things up again and again: You've tried running, swimming, kickboxing, anything and everything you could think of, and cardio still isn't doing it for you. The issue, then, might be that you're not feeling stimulated enough to care about or look forward to your cardio workouts. In order to find that motivation, fitness trainer Reggie Chambers tells Elite Daily you could partner up with a friend, or, if your gym buddy is MIA one day, you can jam out to a pump-up playlist, or listen to a podcast. If you're looking for suggestions, Reebok is partnering up with production company Gimlet Media to launch Flipping the Game, the first podcast series to focus on how women have influenced the sneaker and athletic-wear industry. The first three episodes of the podcast are dropping on Thursday, June 14, and if tuning in doesn't make you want to run (to the mall, that is), then I don't know what will.

Bottom line: The overall point here is to have fun with cardio, because honestly, attitude is everything. If you start a jog with a poor mindset, how do you expect to meet your goals? Exercise is necessary for your health, but it doesn't have to feel like a chore. Find something you love, and simply roll with it. If at some point it stops serving you, try something new! You don't have to be a marathon runner; you just have to move.

More like this
I Tried Singing While Running Like Miley Cyrus & OMG, My Lungs
By Rachel Varina
These 40 Clever Vaccine Selfie Instagram Captions Deserve A Shot On Your Feed
By Rachel Chapman
7 TikTok Recipes Using Ramen To Make Lasagna, Pizza, Smoothies, & More Treats
By Kelly Pau
Stay up to date