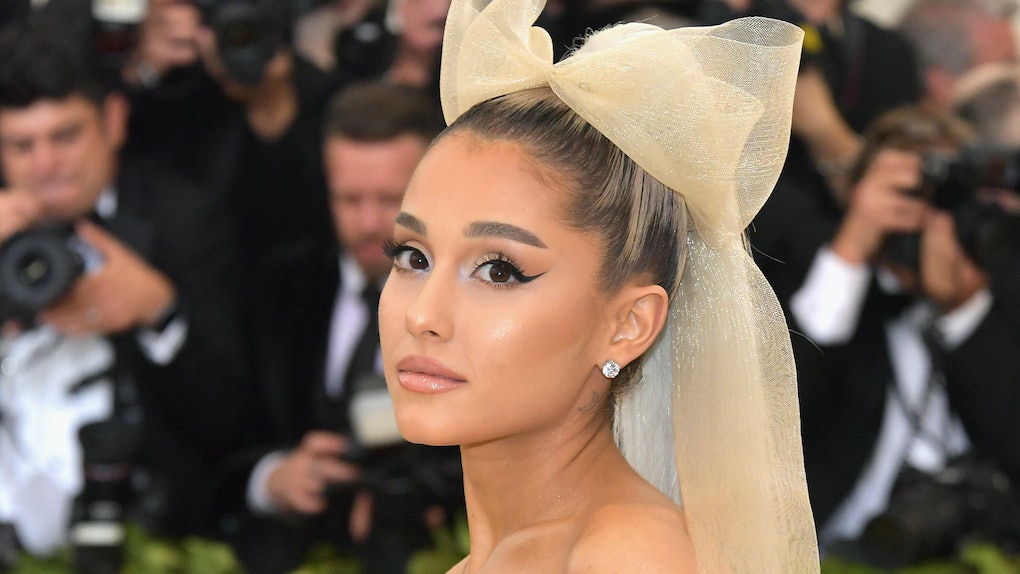 How Many Tattoos Does Ariana Grande Have? The Short Answer Is A Ton

There are plenty of things that I know about pop star Ariana Grande. She's absurdly talented, she's got one hell of a signature ponytail, and that she's got ink all over her body. While some of Grande's tattoos have made waves (hello, barbecue grill), she's got plenty of others — all with seemingly meaningful ways to symbolize a specific person or point in her life. Just how many tattoos does Ariana Grande have? After doing some digging, the total number is way more than I ever could have expected.

While there are some tattoos that have been more, erm, widely talked about than others, Grande has been getting inked for years at this point. The first tattoo the Sweetener singer ever got was way back in 2012, which means there have been seven years of sitting in the tattoo artist's chair so far. And, while getting tatted up initially started slow and steady, things have ramped up for the singer in more recent years.

So let's play a fun game called "Try to find all of Ariana Grande's tattoos." Of course, Ari is a celeb with a ton of tats, so it would be damn near impossible to verify each and every one. But here's what's known...

1. An outline of a heart

Back in April 2012, Grande got her first tattoo — the outline of a heart on her toe. On her YouTube channel, she uploaded the video of her getting inked and wrote,

Got my 1st tattoo in the studio with @Skysnuts (LMFAO) while we were recording a really fun duet which you'll all hear soon! (not tattooed heart).. This year has been 1 of the happiest and most enlightening years for me and I felt like I wanted to do something special to remind me of this time....writing my 1st album, working with my castmates & best friends on victorious, being young, having fun and being surrounded by love.. so..I wanted to do something permanent to remind me to always be grateful and not take anything for granted so.. I got a little tattoo. :)

At the nape of her neck, Grande got the famous phrase the Audrey Hepburn says, "Mille tendresse," which is French for "one thousand tendernesses."

Ariana Grande herself explained why she got the word "bellissima" — which means "beautiful" in Italian — tattooed in script on her ribcage, explaining on Twitter that it was what her grandfather called her:

Fun fact: Grande's third album, Dangerous Woman, wasn't always supposed to have that title. During a live chat, Grande revealed that the original title was meant to be Moonlight. Maybe the tattooed crescent moon on her neck was supposed to represent that? Or, maybe not.

This is reportedly a term of endearment that Ariana Grande's grandmother uses to call her. Aww.

6. Another outline of a heart

Unclear as to why Grande decided to get the outline of a heart — this time on her ring finger — tattooed on her person once more, but hey, it's cute!

You might be surprised to find out that Grande's "A" tattoo on her thumb wasn't just because her name is Ariana: it's actually a tribute to her friend Alexa Luria as well.

"I got this one for my best friend slash for myself, since we both have the same initial," she said in a Snapchat video back in 2016. The more you know!

Ariana got the Venus symbol on her finger the same day as she got the "A" tattooed on her thumb.

Grande got a worker bee tattoo in May 2018 to honor the lives lost at the Manchester attack during one of her concerts. The worker bee is the city's symbol.

Back in May 2018, fans noticed that Grande and Pete Davidson got matching cloud-shaped tattoos on their left-hand middle fingers before the pair announced they were a couple. Scandalous.

11. A crescent moon and stars

While there's no known reason for the meaning behind this tattoo, it should be noted that she got inked while alongside her 93-year-old grandma getting her first tattoo in December 2018. Best. Grandma. EVER.

See that itty bitty line of black right above Grande's left knee? That's for her friend Courtney Chipolone, meaning Grande has not just one, but two homages to her good friends inked on her body.

"H2GKMO" stands for "honest to God knock me out," which is apparently Grande's favorite phrase. She and her friends (ahem, and Pete Davidson) got the same tattoo in June 2018, and when she faced backlash by fans over the new ink, she took to Twitter to explain her reasoning.

"It makes me so happy i can't wait to be 90 and remember how happy my life was & how few f*cks my friends and i gave," she wrote:

The number "561" is the area code for Boca Raton, Florida, which is where Grande was born and raised.

As you can tell from the image before this one, Grande covered another matching tattoo she got with Pete Davidson. Originally, the word "reborn" was inked on her thumb, which was then tattooed over to create an olive branch or leaf of some sort.

Though it's tough to make out this one, Grande herself confirmed that her tattoo does say "Myron," which is the name of Mac Miller's dog that Grande has adopted following his tragic death of an accidental drug overdose. In some behind-the-scenes footage of her music video, "Thank U, Next," Grande was practicing her Legally Blonde bend and snap and said, "I love my tattoos. I just went down to do the bend and snap and was like, 'Ugh! What a foot.' Look at my Myron — how cool, right?"

But "Myron" wasn't the first tattoo in that particular space. Originally, Grande tattooed the number "8418" on her ankle, which was the badge number of Pete Davidson's father, a firefighter who died on 9/11.

"I've wanted this for so long," Grande wrote over a photo of her new tat on her Instagram Story in January 2019. As for why she got Eevee inked on her forearm, it might be because she really, really loves playing Pokémon Go.

Grande first snapped a photo of the Japanese phrase across her arm on her Instagram Story, which she later confirmed on Twitter translated to "Let's sing" in January 2019:

19. The character Chihiro from Spirited Away

Chihiro, who is a character from the animated film Spirited Away, is tattooed on Grande's forearm. Before revealing her tattoo, Grande took to Instagram to explain the protagonist:

Not a bad character to feel inspired by, if you ask me. Grande's portrait of Chihiro was inked by New York City-based tattoo artist Mira Mariah.

Ah yes. Finally there's the ink heard 'round the world.

In honor of the release of her song "7 Rings," Grande got a tattoo on the inside of her hand in January 2019 to celebrate. The tattoo was supposed to read "7 Rings," but fans realized that when the kanji characters are put together, the phrase turns into "shichirin," which is a small charcoal grill.

Grande then revealed the reason why she didn't tattoo the accurate phrase. In a now-deleted tweet, Grande wrote, "Indeed, I left out 'つの指' which should have gone in between," she wrote on Twitter. "It hurt like f*ck n still looks tight. I wouldn’t have lasted one more symbol lmao. But this spot also peels a ton and won’t last so if I miss it enough I’ll suffer thru the whole thing next time."

She went back to the drawing board (aka, her Japanese tutor) to fix the mistake, but fans realized that, instead of fixing the tattoo to read "7 Rings," it now reads "Japanese BBQ finger."

Ah, well. Can't win them all I guess!

There you have it, guys. Just a small sampling of Ariana Grande's many tattoos for your enjoyment. And Ariana, if you're reading this, do me a solid and send over the ones that aren't on the list. I know you've got more, girl!

More like this
When Are Ariana Grande & Dalton Gomez Getting Married? Here's The Reported Tea
By Corinne Sullivan
Demi Lovato & Ariana Grande's "Met Him Last Night" Lyrics Focus On Toxic Love
By Brandy Robidoux
A Kim Kardashian Skin Care Line May Be Coming Soon
By Margaret Blatz
Stay up to date