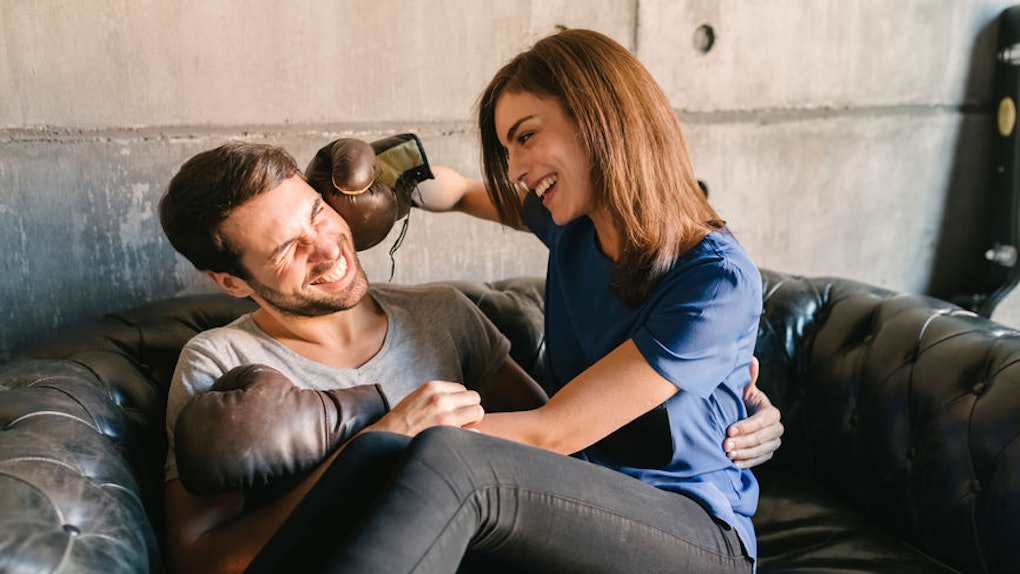 How Many Fights Should You Have Before Breaking Up? This Is What Experts Say

As most couples know, it's not that big of a deal to fight in a relationship. Every couple fights, and while there's no standard formula for how often you should fight with your partner, there are definitely some signs to look out for that things in your relationship aren't going too well. If you're unhappy, or fighting every day, or the fights are getting worse, you should reflect on that. So, how many fights should you have before breaking up?

Well, it turns out, there's no real magic number, but there are red flags to look out for in your partner. Every couple fights — that's just the truth. The thing is, not every couple fights a lot, to the point where their relationship is unhealthy, or it's just not making them happy anymore. So, if you're fighting every day, or if your fights are intense, scary, or make you feel bad about yourself, then you should definitely evaluate what's going on.

There's a difference between fights and arguments. According to Frances Metzman, author of The Cha-Cha Babes of Pelican Way, the difference between fights and arguments has less to do with what's being said, and more to do with how it's being said. "It is the content of what is being said or asked for," Metzman tells Elite Daily. "If you ask for a behavior to stop and it leads to screaming or talking over one another, that is a fight that usually leaves anger and resentment. That will build to a breaking point if there is not agreed upon resolution."

The thing is though, just because you're fighting, doesn't mean you should break up. Maybe there's a larger issue at play that you both just need to face head-on. It can be hard to have those difficult discussions, but if you don't want to just end things, then it might be necessary.

"You might be opposite personalities and argue frequently, but if each step brings fruitful discussions and there are changes, that promises to be a good relationship," Metzman says. "If over time you are seeing fewer fights and there is more listening, you are on the right path. Repeating the same argument means the demise of the relationship. Arguing frequently about the same issues over and over for long periods means there are going to be no changes and it is time to get out. Your partner is caught in a spiral of needing drama and hurting you."

Again, there is no exact number of fights you should have before breaking up, but you can be looking at how your fights change over time. If they're getting worse, it might be time to end things.

Additionally, according to dating and relationships coach Chris Armstrong, there are three questions about fighting with your partner that you need to address in order to learn whether or not a breakup is coming. First of all, you should ask, "Am I being heard?" Armstrong tells Elite Daily. Basically, if your partner isn't actually listening, then it's an issue.

Next, you need to ask, "Who initiates them? If the fights or spats are frequently initiated by one partner, that is a red flag." If someone is always wanting to turn everything into a fight, then a bigger issue might be at the forefront. Last, according to Armstrong, you might consider asking yourself if the fights are getting "eventually resolved," because, "if the fights or spats end but don't truly get resolved, that is a red flag. Simply put, build-up will occur and that will consciously or subconsciously increase as the relationship continues and disagreements mount. This is precisely why mountains can be made out of molehills. If two people are fighting about seemingly little things it's because baggage is left from previously unresolved conflict."

So, look closely at how your fights happen, and whether or not they're becoming more hurtful. According to Dr. Jason B. Whiting, a researcher of deception and conflict in relationships, another way to look at your fights and see if you should break up is to observe the language being used. "If the flights contain emotional abuse such as name-calling, mocking, contempt or cruelty, it is a bad sign and often damages or ends relationships," Whiting tells Elite Daily. "It is OK to disagree and work through different emotions and opinions, but it should be done in a way that doesn’t become cutting or mean."

Basically, "There isn't a magic number," Nicole Richardson, licensed professional counselor and marriage and family therapist tells Elite Daily. "If you are feeling as though it is too much, listen to that." Follow your gut. Only you know what your relationship looks like, and if there's aggressive fighting or hurtful words, then consider how it could be better. That may mean a breakup, or it may mean working through things. That much is up to you.