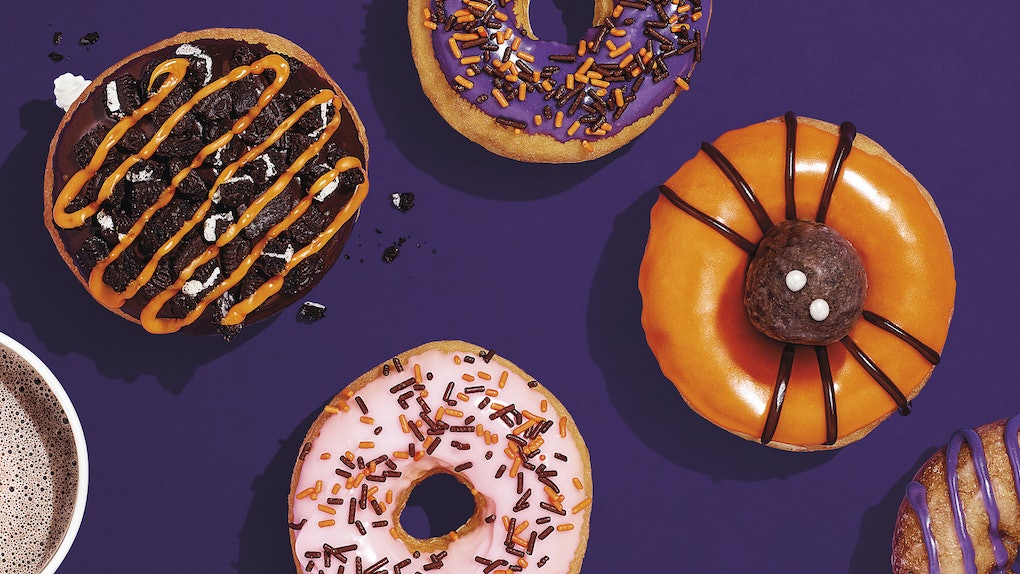 How Long Will Dunkin’ Donuts Halloween Donut Be Available? There's A Catch

Now that it's finally October and sweater weather is in full force, Dunkin' Donuts is blessing its customers with a spooktacular selection of Halloween confections starting on Oct. 3. In addition to bringing back a fan favorite from last year that's a total slam dunk (sorry), the retailer is also rolling out an Oreo donut that's the foodie mash-up that I never knew I needed. So, how long will Dunkin’ Donuts Halloween donut be available? Well, there's one big catch: Only one of these bad boys is sticking around after the scariest night of the year.

On Oct. 3, Dunkin' Donuts revealed that it is giving several of its beloved pastries a spooky makeover that expertly toes the line between scary-good and too cute to eat, per a press release. While all the classic donuts you know and love are reportedly "dressing up" in the colors of the season, fans will definitely be salivating over the return of the Spider Donut, which will be available at participating Dunkin' locations through Oct. 31. ICYMI last year, the adorable eight-legged confection features a spider — made out of chocolate and white icing and a glazed chocolate Munchkins donut hole — sitting atop an orange icing-glazed donut, and it's just begging to be eaten. Trust me, this treat will haunt your dreams in a good way.

Meanwhile, Dunkin's brand new Oreo Donut features all of your favorite flavors in one doughy, totally delicious package, and I could honestly get on board with the retailer serving this offering any day of the year. According to a press release, the Oreo Donut is "filled with vanilla buttercreme, topped with chocolate icing, dipped into a crumbled Oreo cookie topping" before being topped with a generous layer of dark orange icing." Not only does it sound amazing, but it's also available at participating DD locations through early November, which means that you'll have the perfect treat to wean yourself off the Halloween sugar hangover.

If you've been stressed out about Dunkin''s controversial moniker change, you'll also be happy to hear that the chain is still making their new treats dunkable, thanks to their new Oreo Flavored Hot Chocolate. Like the Oreo Donut, the Oreo-infused sips are also available through early November and feature the "rich flavors of cookies and creme." Something tells me that it would be the perfect accompaniment to any of your ghoulish bites, whether you choose to dunk one of DD's seasonal donuts or a classic that has undergone the spooky treatment.

If last year's otherworldly selection is any indication, you can expect the festive overhaul on the "Boston Scream" (updated with a very festive orange drizzle) while the "Witches Brew Berry" will probably feature, you guessed it, a purple berry glaze. Meanwhile, the "Vampire's Delight" will probably be stuffed with a red jelly filling that Dracula would be unable to resist, while "Scary Strawberry" is likely to get a spooktacular makeover via orange and black sprinkles.

In other words, Dunkin' is seriously upping the ante this year with selection of witchy bites and sips, and I'm so here for it. Just remember that while the Oreo Donut and the Oreo Hot Chocolate are sticking around through the beginning of November, the Spider Donut will be crawling back to its web come Oct. 31. So make sure you give yourself plenty of time to sample all of the spooky treats on offer and make your Halloween run on Dunkin'.