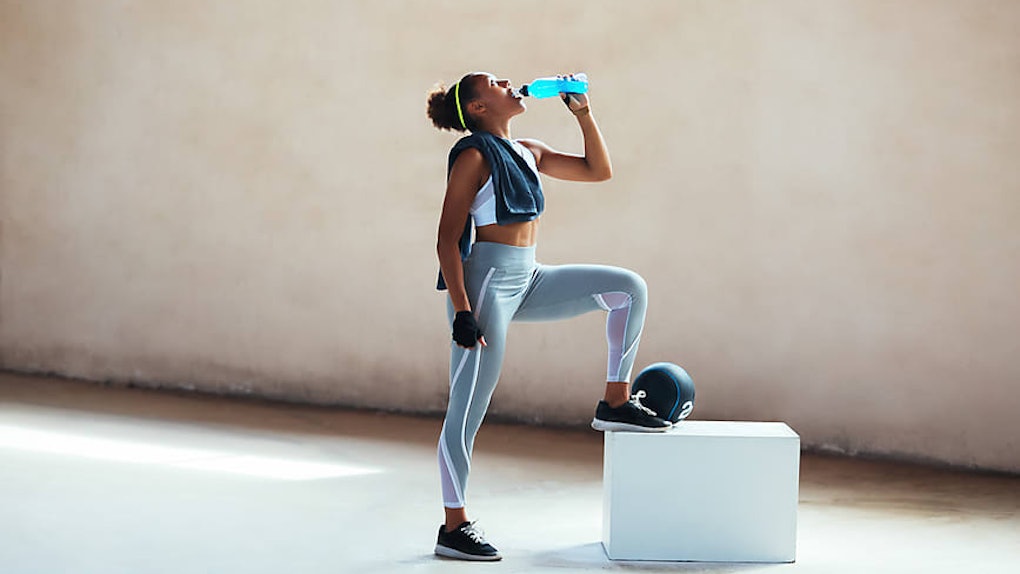 How Long Should A Workout Be To Gain Muscle? Science Says 13 Minutes Could Do The Trick

What if I told you that you could do a strength training workout in half the time you normally do and still get just as strong? You'd think I was speaking of magic, wouldn't you? Well, friends, the truth is, the question of how long a workout should be to gain muscle really depends on how you're approaching the workout. Apparently, according to the results of a new study, if you're doing something the fitness pros call "training to failure," you might be able to exercise for a lot less time than you think. We're talking, like half an episode of 30 Rock. Yes, seriously.

The study, which has been published in the medical journal Medicine & Science in Sports & Exercise, showed that it might be possible to to gain more or less the same muscular benefits with one brief set of a workout, rather than the traditional three sets. The one caveat, of course, is that you have to go at that set, like, really hard to make it count — so hard that you absolutely could not complete another set, even if you tried. That's the meaning of "training to failure," BTW, but we'll get into that more in a bit.

As for the study, The New York Times reports that the researchers' goal was to look at just how much, and what kind of weight training one needs to do to make their muscles consistently larger and stronger.

Now, before I get into how the study was done, it's worth noting that the research only included 34 "healthy resistance-trained men," according to the study authors, so the results may be a bit limiting. Even so, there's something to be learned from these findings, so here's how the research was done: To begin, the researchers tested and recorded the men’s baseline muscular strength, endurance, and the size of their muscles. Then they randomly assigned each of the men to one of three different supervised weight-training groups, all with slight differences in their routines, though each one included pretty standard exercises like machine leg presses, bench presses, and lateral pull-downs. For all 34 men in the study, a set of any of these exercises was considered to be about eight to 12 reps, and the participants had to lift to failure, meaning lift until they literally could not do it anymore.

As for how each workout routine differed, one group was instructed to complete five sets of each exercise, with 90 seconds of rest in between each set; these guys stayed at the gym for around 70 minutes. Group two did three sets of each exercise and worked out for about 40 minutes total. Group three finished one set and one set alone, finishing their gym time after only 13 minutes. Each participant in the study did their workout three times a week over the course of eight weeks before they went back for a check-in with the researchers.

Now, while the researchers found that every single one of these dudes got stronger during the study, what was particularly interesting was that the men who did only one set in their workouts gained just as much actual strength as the men who did more sets. Isn't that wild?!

The one thing that differed, the study found, was the size of the men's muscles, aka their muscle mass, "but they were not noticeably stronger," according to The New York Times. So, basically, the big takeaway here is that strength and size don't necessarily correlate, and really, one of the most important things to do during strength training, if you really want to see results, is to train to failure.

In fact, strength and conditioning coach Evie Fatz says that, as long as you're lifting safely and within your own body's boundaries, training to failure can be a great way to approach your workout routine. "When looking to build lean mass, pushing the reps until you can't lift the weight any longer has its benefits," she tells Elite Daily over email. "You need to be pushing yourself to the very last rep, when your muscles are about to give out [for training to failure] to work. However, you do not want to be pushing to failure every time you're in the gym."

But hey, even though you can't necessarily go super hard for every trip to the gym, if it means one of your workouts each week can be just 13 minutes long, I'd say that's still pretty great, right? More time to binge 30 Rock.

More like this
I Tried Singing While Running Like Miley Cyrus & OMG, My Lungs
By Rachel Varina
The TikTok Recipe You Should Try, Based On Your Zodiac Sign
By Chelsea Jackson
These 40 Clever Vaccine Selfie Instagram Captions Deserve A Shot On Your Feed
By Rachel Chapman
Stay up to date