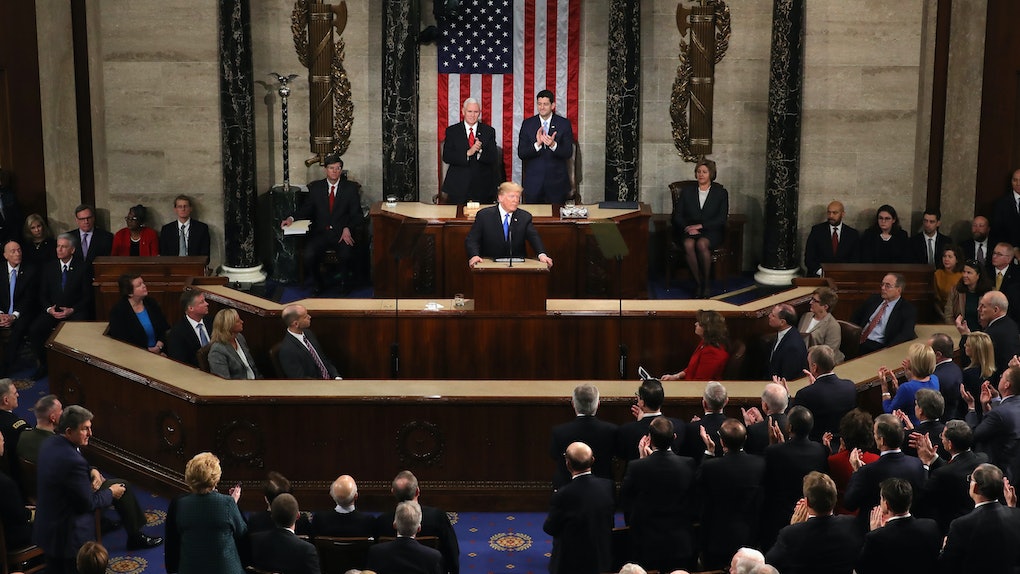 How Long Is The 2019 State Of The Union? Here's What To Expect

It may be hard to believe, but it's that time of year again for the president to officially make an address to the nation and Congress on the state of affairs. On Tuesday, Jan. 29, President Donald Trump will give his second State of the Union (SOTU) address. For anyone wondering how much time they should plan to set aside for the big night, here's how long the State of the Union address might last.

The time has yet to be determined, but based on previous events, it will likely take place during prime-time TV hours. Both the 2017 and 2018 addresses took place at 9 p.m. ET, so that's a safe bet to go off.

As for the length, there's no official time window in which the president must give his speech, but the speech itself is likely to run at least an hour if his previous ones are any guide. Looking at Trump's first two addresses as a guide, the 2017 speech clocked in at an hour on the dot, and his 2018 speech ran an hour and 20 minutes.

That's about standard as far as the State of the Union address goes. But there's a pretty wide range, the House of Representatives History archives show. Some presidents have zipped through the event with a brief 1,000-word address, while others have taken their sweet time and logged more than 33,000 words with it. The average is 5,000 words, which, according to an average estimation of a relatively slow speaking pace, puts it right around an hour. So plan your night accordingly.

Speaker of the House Nancy Pelosi, per custom, formally invited Trump to do the honors at the State of the Union on Jan. 3. In her letter to the president, she wrote:

In the spirit of our Constitution, I invite you to deliver your State of the Union address before a Joint Session of Congress on Tuesday, January 29, 2019 in the House Chamber. I look forward to welcoming you to the Congress.

But Pelosi also made clear the constitutional underpinnings and pretense under which he'd be expected to speak. "The Constitution established the legislative, executive and judicial branches as co-equal branches of government, to be a check and balance on each other," Pelosi also wrote in the letter.

The speech, though delivered to Congress, is generally live-broadcast to the public, so it's a good opportunity for citizens to hear what the president has to say about the country and its status now and moving forward. And since the Jan. 3 invitation went public, people are already weighing in on it.

It has yet to be announced who might give the official responses this year, an honor typically given to a chosen member of the opposition party as a rebuttal, though the president's party sometimes also gives remarks following the speech. It's also not yet known who the designated survivor will be this year, following the custom of selecting one member of the cabinet or government to hang back in a separate location during the speech itself so that, in the event of a catastrophe that wipes out the rest of the pack, someone is still left to lead the people.

It's also unclear what Trump will speak about this year, but as with 2018, he will be coming into the State of the Union to address the nation and Congress on the heels of — or potentially still in the throes of — a government shutdown. Trump also requested national airtime during prime time on Tuesday, Jan. 8, to make a brief appeal to fund a border wall, his key demand for reopening the government, which is now in its 20th day of partial closure.

This will also be the first time Trump addresses a divided Congress. Whereas he had the benefit of speaking before a Republican-ruled House and Senate for the last two years, he's now facing more opposition with Democrats in power in the House. So there's plenty that might underscore this year's address, but all that is yet to be determined. It's anyone's guess what this year's address will bring, so sync up your popcorn and live-streams early to be sure you don't miss the big event.