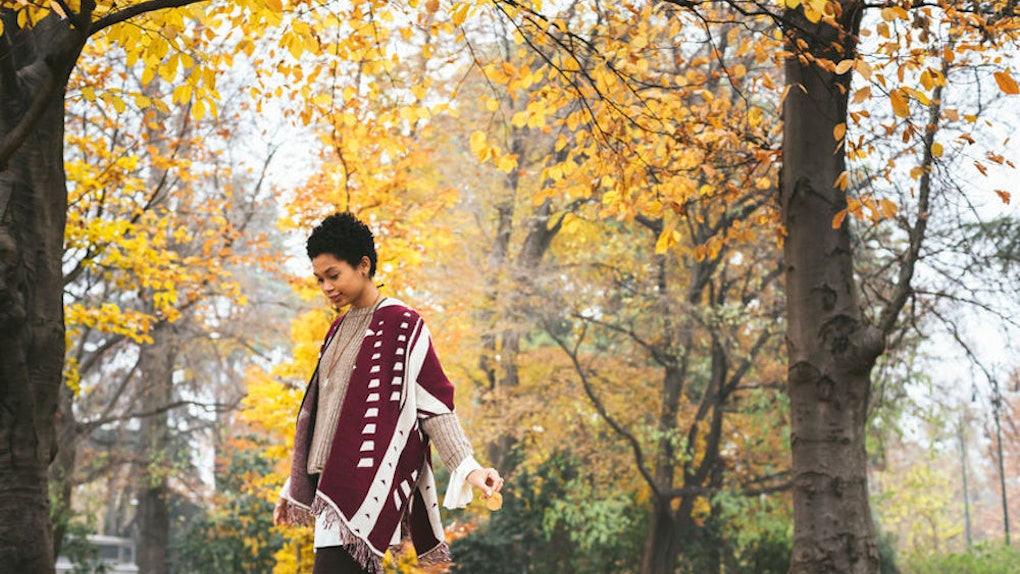 How Does Your Neighborhood Affect Your Health? Living Near Nature Is Where It's At, Study Shows

Whenever I'm feeling gloomy, I sometimes want to just stay in my pajamas all day and drink copious cups of tea. While there's definitely a time and place to laze around on the couch, I've realized it's usually more helpful to get out of the apartment and wander around outside when you need to shake off a funk. Personally, I live in D.C., so I like to head to the nearby Theodore Roosevelt Island, which is so full of trees and birds that it's my own personal oasis in the middle of the city. How your neighborhood affects your health is actually fascinating, from a scientific perspective, and it might even lead to some health benefits you've never considered.

The benefits of nature seem pretty much endless, so of course it makes sense that plenty of greenery is good both for warming your heart and for keeping your physical heart healthy. Published in the Journal of the American Heart Association, a new study researched the connection between living in a green neighborhood and the likelihood of cardiovascular disease, and you won't beleaf what the scientists found (sorry, I had to). The study's researchers tested the blood and urine of over 400 people from a preventive cardiology clinic over a period of five years, and then studied the data in association with the environments in which the participants lived. Even when controlling for factors like age or smoking status, the results were clear: "Residential greenness is associated with lower levels of sympathetic activation, reduced oxidative stress, and higher angiogenic capacity."

In other words, living near, and being exposed to, lots of nature and greenery, is pretty dang good for your heart health.

In a statement for the study's press release, Aruni Bhatnagar, Ph.D., lead study author, professor of medicine, and director of the University of Louisville Diabetes and Obesity Center, suggested that this knowledge could inform significant ways to help keep people healthy. "Indeed, increasing the amount of vegetation in a neighborhood may be an unrecognized environmental influence on cardiovascular health and a potentially significant public health intervention," he explained.

The thing is, living near nature isn't just linked to improvements in heart health. When it comes to your mental health, for instance, how much greenery is nearby isn't the only important factor in how much it will benefit you. A 2017 study published in the International Journal of Environmental Research and Public Health found that the quality of the natural environment — or at least perceived quality — is just as important as how many actual trees are around. The survey of 223 residents in two neighborhoods in the Netherlands showed that people tend to care deeply about how accessible and useable they feel their green spaces are. What's more, the study found a connection between mental well-being and the residents' overall satisfaction with their neighborhood.

To reap the most mental health benefits of the green spaces near you, try to find activities you can do outdoors with other people. “If it’s a social space, where people meet together and chat and go on walks, that kind of social contact and interaction builds social networks,” Dr. Andrew Lee, a public health researcher at the University of Sheffield, told TIME. “That’s probably where the real impact is coming from that gives people a sense of wellbeing.”

I know it's chilly outside these days, but try going for a power walk with a buddy to get your blood moving and reap nature's wellness benefits at the same time. You could even grab some steaming hot chocolate to keep your hands warm as you stroll.