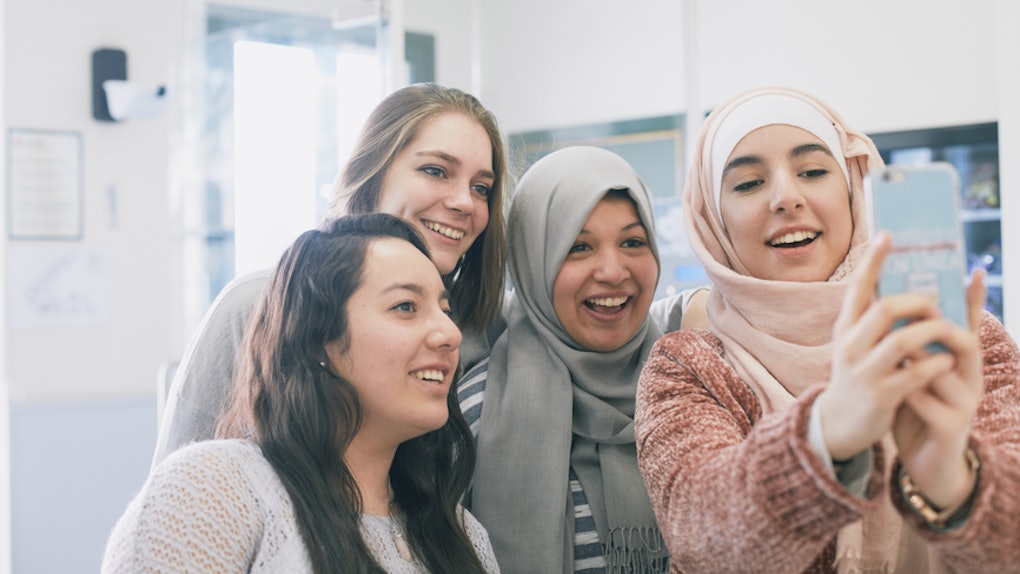 How Do We Choose Our Friends? Science Says You & Your BFF May Share Similar Genetics

If you and your squad have a habit of calling each other “sista frandz,” you guys might actually be onto something. No, I’m not about to drop a catastrophic truth bomb that reveals your BFF is actually your second cousin twice removed. This isn’t a soap opera, but it is science. It turns out, how we choose our friends has less to do with the fact that in first grade you loved her sparkly pink backpack with plush pom-pom zipper details, and more to do with genetics. In other words, you and your BFF gravitate toward one another because you have legitimate chemistry — you know, the kind of technical spark you read about in textbooks.

Of course, that whole "opposites attract" phenomenon is still a thing; not everyone is going to bond for life just because they both like eating peanut butter and jelly sandwiches for lunch. Having said that, though, research does seem to suggest like does attract like. According to a new study, you and your ride or die are more than likely two peas in a pod, and this could be because you share similar interests, or maybe you just happened to have grown up in the same neighborhood. Call it what you want — fate, coincidence, whatever — but you’re basically programmed to befriend people you share similar characteristics with. Sure, it sounds a little vain, but it definitely makes sense.

According to research, two friends are more genetically similar than two strangers as a result of “social homophily,” aka the fact that we connect based on similar personalities.

This is all subconscious, by the way. I highly doubt you knowingly approached the concept of making friends in your elementary and teen years with the notion that your clique needed to be genetically sound. If you think back to the types of people you hung out with/felt safe around, though, there are probably countless reasons why you meshed so well that go beyond favorite colors and music genres.

The latest theory explores why and how we choose our friends, and how the deciding factor could be linked to genetics. The study, which examined adolescent friends in grades seven through 12 over the course of a school year, found that classmates related most to those who shared genetic details with them, including things intelligence and even body mass index. Weird, right?

Additionally, if you and the other person grew up in the same community and, for example, attended the same school, church, or were involved in the same athletic program, your budding friendship could have been a direct result of what’s called a "life cluster," or group of people you just happen to be surrounded by due to circumstance. They say timing is everything, but clearly, so is setting.

Who we become friends with seems to be a question of nature versus nurture.

What came first: the chicken or the egg? It’s puzzling, right? Well, science is still trying to figure out what comes first when it comes to building a friendship: Is it genetic influence, or the natural ways social structure brings us together as a result of time and place?

For the record, I am in no way, shape, or form an expert on the subject. But, personally, I would assume we first initiate interaction because of circumstance, and then we make the decision to continue conversation and contact when we realize the other person shares our interests. According to one of the study's lead co-authors, Benjamin Domingue, I'm not really that far off. Domingue told TIME,

Are individuals actively selecting to be around people who are like them, or is it due to impersonal forces, such as social structures, that we all are affected by?

Our evidence, with respect to friends, suggest that it’s largely the effect of social structures.

In short, researchers have determined there is, without a doubt, some sort of genetic connection there. Still, in the meantime, valid arguments can be made either way until enough information has been gathered to definitively conclude we form friendships solely because of genetics or social structure.

Sociology professor and co-author of the study Kathleen Mullan Harris told TIME that the next step is for geneticists to “pay attention to the social context” as they begin to hone in on genetic influence on different traits, so they can begin to narrow down what actually inspires these strong human relationships.

Bottom line: Your squad is yours for a reason; it might just be more scientific than you thought.