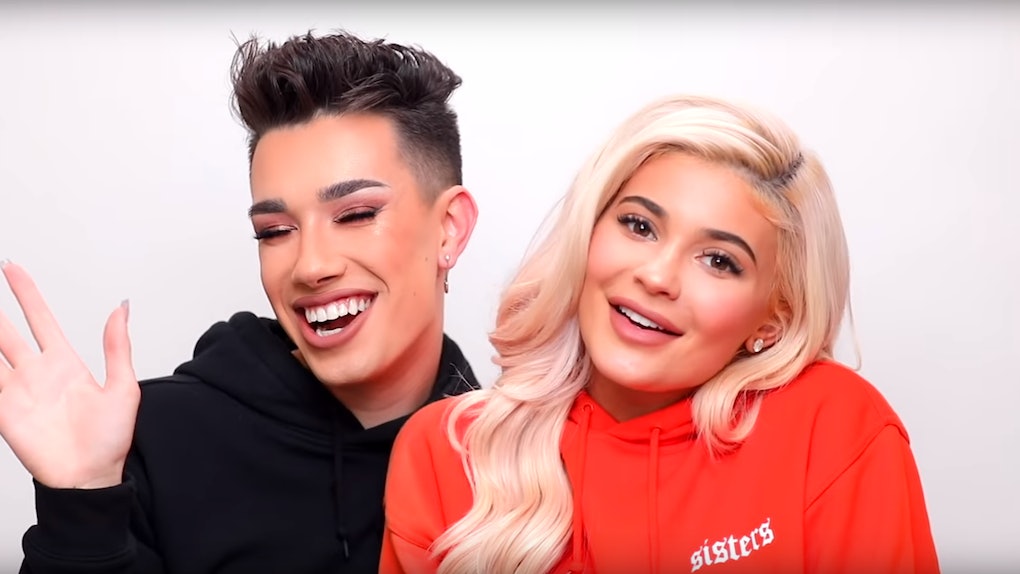 How Do James Charles & Kylie Jenner Know Each Other? They Have A Lot In Common

James Charles may be at the center of a handful of feuds right now, but one person he’s very much on good terms with is Kylie Jenner. The two beauty gurus obviously have a lot in common, so it should come as no surprise that they also have a lot of love for one another. So, how do James Charles and Kylie Jenner know each other? Well, they’ve actually collaborated with each other in the past.

It all started in July 2018 when Jenner tweeted Charles to ask if they could shoot a video together. Then, in October 2018, Jenner and Charles actually made that happen. The two got together to make a Halloween-inspired video that got lots of attention. After their video was uploaded to YouTube, Charles absolutely gushed about Jenner in a November 2018 interview with Entertainment Tonight.

When asked about his blossoming friendship and Halloween collaboration with Jenner, Charles had a lot to say.

"It was just really, really amazing. She was just so sweet," Charles said of Jenner at the time. "It was just really amazing to see someone else in this space working really hard and just making it at a young age. She's just a huge inspiration to me and I definitely had a similar experience to her in that people just love to tear you down and bash you and stuff, but she's a great role model."

What a compliment to Jenner. He clearly idolizes her a little bit and sees her success as something to aspire to, which is sweet. I’m sure it meant a lot to him to be able to collaborate with her on a makeup tutorial video. And Jenner seemed equally enthusiastic about working with him, so everyone was a winner here.

Here’s a look at Jenner and Charles’ Halloween collaboration video:

At the time, he also opened up to ET about how inspirational he thinks Kris Jenner is and why he sees her as a role model as well.

"She's a genius, and what, like, anybody seems to think, building a business is probably the best talent that anyone could have and being able to leverage your name for likeness and build a brand around it — hello, that's so smart and so good," he said, later adding, “I have her phone number. She is the sweetest. I've met her so many times. I'm close with her and her entire family, which is amazing."

Charles also shared a photo of himself and Jenner on Instagram, which shows that their friendship is just as strong as it was when they first met.

Even though Charles’ feud with Westbrook may have made Jenner a bit apprehensive on social media, she has clearly welcomed Charles with open arms to her launch party. So, it seems like all is good with this particular friendship, which is great to see!