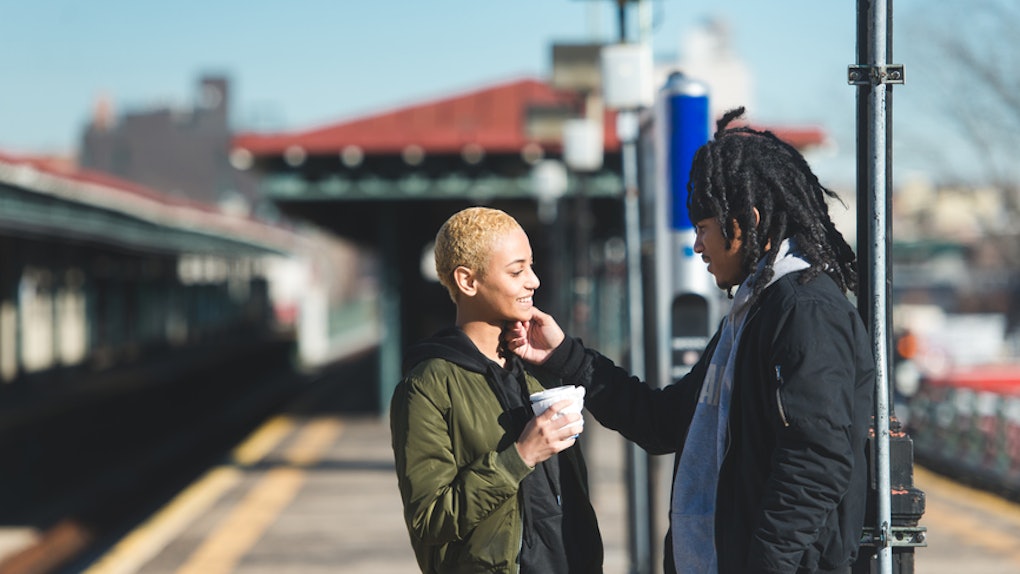 How Did You Meet Your SO? Guys Reveal The Heartwarming Stories Of How They Met Their Partners

My boyfriend and I met at a bar while we were both on vacation for the Fourth of July. His go-to move with the ladies that weekend was to drop down on one knee and propose to them in the middle of the bar. He did this to me after I made a not-so-appropriate joke about how, exactly, I wound up with the bucket hat I was wearing (lots of weird elements to this story, I know). Anyway, after about four days of him persistently asking me on a date, I caved. But enough about me... how did you meet your SO? You see, I'm a sucker for a good "how we met" story.

Some are just silly, drunken stories like mine. Some are more extravagant stories that sound like the start of a Nicholas Sparks novel-turned-movie. Some just involve two people who happened to swipe right on each other. No matter what the case is, I love the idea that the universe brought two people together, and they were able to go from being total strangers, not expecting anything, to two emotionally intertwined souls. I apologize for using the term "emotionally intertwined souls," because trust me, I know how cheesy that sounds. But how else are you supposed to describe something as deeply satisfying as LOVE?

Well if you, like me, enjoy a nice "how we met" story, treat yourself to these stories a few men on a recent Reddit thread shared about how they met their significant others.

They were on the same flight.

We sat next to each other on an airplane 2 years ago. Started talking pretty much immediately and haven't shut up since.

They sat next to each other on the train.

Was working on a ship, randomly jumped ship in the UK was on the underground one day in London and sat down next to her. Asked her out to coffee as we were both getting off at the same stop and she said yes. 6 months later we were engaged after a LTR with me living in CA and each of us flying out every other month. We just knew it was right. Coming up on 9 years now and she’s cuddled up next to me right now.

I first saw a picture of her on a friends Instagram post. I was like “damn who’s this cutie?” A couple days go by and I see her tagged in another photo and then we followed each other cuz why not?

A few days later the friend who made the first post invited me to go out in a group. Turns out that cutie was also invited. Then that lead us to talking and eventually dating

They were in the same high school club.

Two step club on campus. I heard her mention that she went to my rival high school and then I asked her to dance. Going on 13 months now

One insult in their high school parking lot led to five years of love.

My first words to him were “You’re a freaking idiot” in our high school parking lot. Still in love 5 years later.

They worked for the same company at different locations.

My current SO worked at the same company but a different location, we used to talk on the phone for business purposes and then met in person at a meeting. My previous SO lived in the same condo complex and used to see me around and finally approached me at a BBQ in the complex. Others were through friends and my longtime girlfriend was in another band.

He was close with her brother.

Was best friends with her brother in high school. We stopped being best friends when I started banging his sister though. But we’ve been together 3.5 years now.

He was there to comfort her in her time of need.

Met her in the smoke pit at work on night shifts. She was sitting there crying. A friend of hers mom just died. I just listened to her talk. A few days later she out at a bar I was at with a big group of work people. We chatted and got closer together that night and more so for the next few months.

She let him have one quick dance before her Lyft arrived.

Met her at a club and asked her if she wanted to dance. She initially said no because her lyft ride was arriving in like 5 mins. Then I️ said, “All I️ need is one minute.” She said laughed and said okay. Danced for 30 seconds then I️ asked her if she wanted to grab a bite to eat some time. Exchanged numbers. She was able to get to her lyft without being late. Had a great first date and been dating ever since. That was 3 years ago.

They met — wait for it — at a graveyard.

Digging holes in a graveyard (we are both archaeologists).

And then, of course, there's old faithful.

Are you feeling all warm and fuzzy inside? I know I am! Even if you don't have your own "how we met" story to relate to these accounts, just think about it this way: The world is your oyster!!! Every time you step outside (or even just open an app on your phone), there's an endless stream of opportunities for you to find LOOOOOOOOVE.