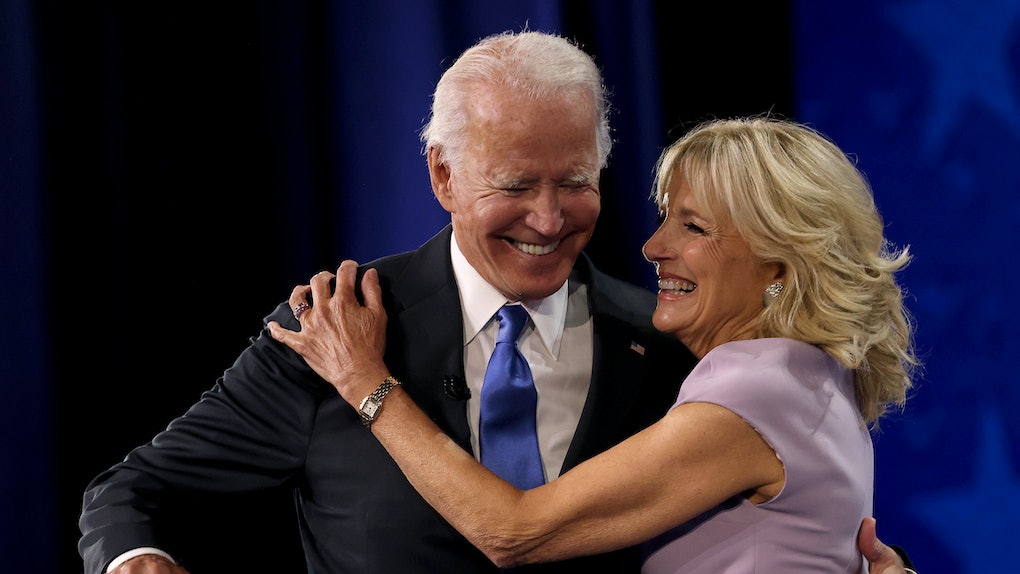 How Did Joe & Jill Biden Meet? Their Love Story Is Beyond Romantic

Personal tragedies, professional wins, multiple political campaigns — Joe Biden and Jill Biden have been through it all together during their four-decades-long relationship. But how did Joe and Jill Biden meet? If you're a sucker for a good love story, this one's a doozy from the start.

Both Joe and Jill were married before they met. In 1972, the former vice president lost his first wife, Neilia, as well as their 1-year-old daughter, Naomi, in a car accident. He spent the next several years raising their two sons, Beau and Hunter, alone. At the time of the accident, Jill was still married to Bill Stevenson — who she married in 1970 and attended the University of Delaware with. Jill and her first husband separated in 1974 and were officially divorced the following year. Unsurprisingly, Joe "wasn't big on the whole dating scene" following the death of his first wife. However, when the presidential candidate spotted a pic of Jill in an airport ad for Wilmington-area parks shortly thereafter, he was totally *smitten.* And fortunately for Joe, his brother Frank just happened to know his crush, so he shared her phone number.

Joe mustered up the courage to call Jill at some point in 1975 — but she just so happened to be getting ready to go on a date with someone else. In a video for the Democratic National Convention, Jill recalled that Joe asked her, "Do you think you could break your date?" And that's exactly what she did. "I called and told the guy I had a friend in from out of town, and went out with Joe," she explained in the DNC video.

Joe admitted that for him, it was love at first sight. While the Democratic nominee made quite an impression on Jill, too, he wasn't *quite* her usual type.

"I was a senior, and I had been dating guys in jeans and clogs and T-shirts," she explained in an interview with Vogue. "He came to the door and he had a sport coat and loafers, and I thought, 'God, this is never going to work, not in a million years.' He was nine years older than I am!"

Still, to Jill's surprise, she said they "really hit it off" on that first date, which entailed going to see A Man and a Woman at a Philadelphia movie theater in Philadelphia. They ended the night with a polite handshake — but that didn't mean the sparks weren't flying. In fact, Jill revealed in her Vogue interview that she immediately called her mother to say, "Mom, I finally met a gentleman."

Joe wasted no time in trying to snag another date.

After dealing with the death of his wife and daughter, meeting Jill seemed to give Joe some much-needed hope.

“She gave me back my life,” Joe wrote in his 2007 memoir Promises to Keep. “She made me start to think my family might be whole again.”

One morning, while Joe was shaving, his sons Hunter and Beau (then ages 6 and 7) brought up the subject of marriage. In his memoir, the presidential candidate revealed that his son Beau said: "We think we should marry Jill. What do you think, Dad?" And Joe responded, "I think that's a pretty good idea." I mean, could this family be any cuter?

Fairytale romance aside, Joe and Jill have had their own hiccups to deal with throughout the relationship — namely that it took not one, not two, but five proposals for Jill to agree to marry Joe.

"I think it was easier for her in the beginning of our courtship when I wasn't thinking about marriage," Joe wrote in his memoir. "We both just liked having fun with somebody again, and she wanted to keep it that way."

Despite the fact that Jill kept turning Joe down, she noted in her memoir that she was "unquestionably in love with him" and knew "he would make a great husband." In a DNC speech, she explained that she had become so attached to Joe's two sons, that she "had to be sure that it had to be forever" before saying "yes." She was also in the midst of planning her career and trying to establish her independence, making the prospect of getting married a bit overwhelming.

"I knew that if I married Joe, I’d have to give up my apartment, the only space that was just for me," she explained in her memoir. "I’d have to quit my job for the boys’ sake, to give them the time to acclimate to having someone new in the house every day and not just on weekends. And I’d have to become Jill Biden, senator’s wife. It was all too much."

The fifth and final time that Joe popped the question, he swung by Jill's apartment on the way to the airport. He was about to embark on a congressional delegation to South Africa, so they wouldn't be seeing each other for 10 days — their longest time apart since they began dating. Right before he walked out the door, he turned back to Jill and stated: "I’m too much in love with you to just be friends." He told her he was asking her to marry him for the last time, and that when he came back, he'd need an answer. When Joe returned from his trip, he finally got the answer he was looking for: Jill said "yes," and the Bidens tied the knot at the United Nations Chapel in New York City on June 19, 1977. The rest, as they say, is history.

Since that night, Jill and Joe's lives have changed significantly regardless, Jill says the one thing that has remained constant is their love.

"There have been tragedies," she wrote in Where the Light Enters: Building a Family, Discovering Myself. "We have had our hearts wrung and broken. But the only place we are safe from all the dangers of love is hell. And one thing in my life has stayed the same: Joe and I have always had each other."

Given all that the Bidens have accomplished together over their 43 years of marriage — there's no telling what they're capable of in the years to come.