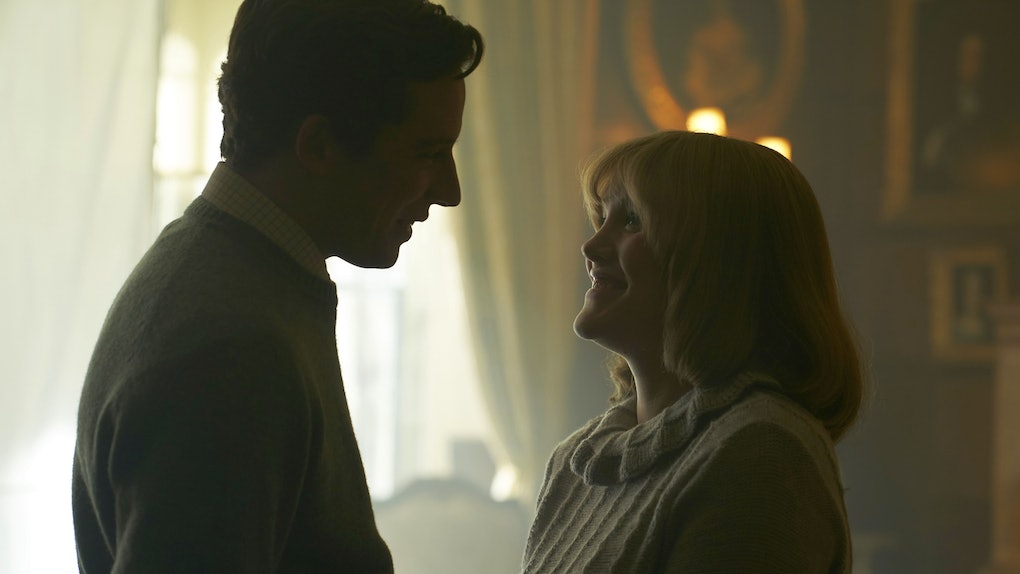 How Accurate Is Charles & Camilla's Relationship In 'The Crown' Season 4? Let's Discuss

The Crown reaches one of the most dramatic and challenging parts of the royal story with Season 4: the 1980s, when Charles, Prince of Wales, married Lady Diana Spencer. Viewers know going into the season that it was a marriage sold as a fairytale and ended in divorce and death. They also know who Charles married as his second wife, the woman he had an affair during this era, Camilla Parker-Bowles. But how accurate is Charles and Camilla's relationship in The Crown? Like his relationship with Diana, some of the details are changed for better storytelling.

Warning: Spoilers for The Crown Season 4 follow. Most know the broad outline of Charles and Camilla's now-40-year relationship. They met in the early 1970s, which the series dramatized (and changed some details about) in Season 3. The timeline is fuzzy in regard to when, exactly, they were and were not involved with one another in the years following their meeting, but The Crown's portrayal of their relationship during the Diana years paints an interesting picture.

So how much does The Crown Season 4 stick to the facts? Like the story of Charles and Diana, the accuracy seems to rely more on emotional truth than exact details.

Camilla's marriage to Andrew Parker-Bowles at the end of Season 3 was portrayed as an act of sabotage by the Palace. Season 4 opened with Charles accusing Lord Mountbatten of it in their last conversation before Mountbatten died.

The truth is more complicated. It was known by both Charles and Camilla the Palace disapproved of their pairing, and Mountbatten certainly had the ability to drop the correct gossip in the right ears at the right time to stop such a relationship. But the idea he and the Queen Mother openly colluded to get Camilla married while Charles was away is fiction.

It is far more accurate to say Charles did not ask Camilla to marry him because he knew the Palace disapproved, and he didn't have the nerve to go against them. While he was gone, Andrew proposed, likely pushed by Camilla's family, who saw him as her best option.

Mountbatten's scolding of Charles for still seeing Camilla lends itself to the truth. Despite seeing other women, like Sarah Spencer, throughout his single days, Charles was known to return to Camilla. In between their stints, he apparently regarded her as his best friend and confidant.

There are even rumors Charles initially asked Di to marry him in the Parker-Bowles' cabbage patch, but the series did not explore that possibility.

In the series, Diana learned a lot about Charles and Camilla via Camilla herself, who told Di about their secret nicknames for each other: Fred and Gladys. Diana then discovered Charles had a bracelet made for Camilla, with the letters F&G intertwined on it.

The bracelet story is true, though, according to Diana, Charles insisted it stood for "Girl Friday," for how Camilla had been his right-hand woman. But according to Diana, at a later party before the wedding, Camilla told everyone the letters really did stand for their pet names.

The "Fred and Gladys" nicknames have been an open secret since Diana revealed it to the public. When Charles finally married Camilla in 2005, a few news stories led with the "Fred and Gladys" bit. Fans of the Prince and Duchess use it as shorthand on Pinterest. There was even a short-lived musical in 2011 called Fred & Gladys, detailing their love story.

By all accounts, Charles did break it off with Camilla before he and Di married. Those first few years once William was born and before Harry came along, seemed to be the happiest years of Charles and Diana's marriage.

The Crown fudged a little on how Charles and Camilla got back together. One minute, he and Diana were trying to make it work, and then two episodes later, their relationship was in tatters. Part of this is due to the time-jump involved. It is generally agreed (and The Crown mentions this) Diana and Charles were done once Harry was born in 1984. But suddenly, the show jumped to 1988, and Charles was back to calling Camilla daily, complaining bitterly about Diana.

According to historians, the part fans are missing is when Charles' friends brought Camilla back around. Apparently worried about how much the collapse of his marriage shattered Charles, they reportedly encouraged Camilla to reach out to him. The series obliquely referenced this in the line about "the whole of Gloucestershire" helping the affair, but that's as far as it went.

It also wasn't kept secret very well either. By 1988, newspapers openly reported on Diana and Charles' affairs, hers with Major Hewitt and his with Camilla.

That's as far as The Crown Season 4 got with these two; here's to uncovering more info when Season 5 rolls around.