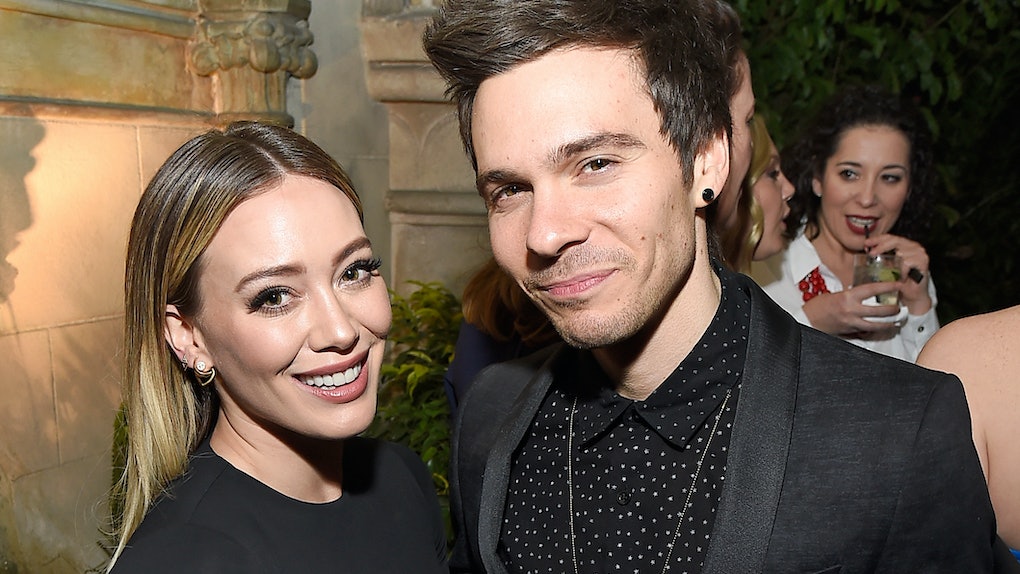 Hilary Duff Is Engaged To Matthew Koma & Her Sparkling Rock Will Make You Say, "Hey, Now"

This is what dreams are made of… Hilary Duff is engaged to Matthew Koma! The star shared her big news on Instagram on May 9, posting two selfies of her and her love (and her gorgeous, sparkling ring). The couple looks happier than ever. Duff captioned the photo "He asked me to be his wife," and, well, let's just say my lips are totally not sealed RN. As a Hilary Duff stan since I was 10 years old, this news is enough to send me straight to Spotify to queue up the Metamorphosis album, stat.

Koma posted the same photos on his Instagram feed, with the caption, "I asked my best friend to marry me... @hilaryduff." Cute, simple, to the point — and can I just say, they're both totally glowing? This announcement is so pure and joyful, I can't deal. The same morning, Duff shared an adorable Instagram story video of Koma dancing along to one of his band's songs at their favorite breakfast spot. Duff was holding the couple's daughter, Banks, who was born in October. Could Lizzie McGuire ever have predicted that she'd have this precious family one day?

After two years together, this is the happy ending this couple needs and deserves. They met in 2015 while working together on Duff's album Breathe In. Breathe Out. If they dated during that time, it was totally on the DL — they didn't appear in public together until over a year later. And Duff dated fitness trainer Jason Walsh in late 2016, but split with him before the end of the year.

In January 2017, Duff and Koma made their red carpet debut at a SAG Awards party, confirming their status as a couple. But things weren't smooth sailing right away, as the couple split up in March 2017 after only a few months together. Duff was linked with Ely Sandvik for a brief period later that summer.

But then, in October 2017, Duff started sharing photos of Koma on social media again. She confirmed in December 2017 on The Talk that she and Koma were back together (apparently for the third time), saying, "Timing is such a big deal… third time's a charm!"

And it appears her intuition was correct. In June 2018, Duff announced on Instagram that she and Koma were expecting a baby girl — her second child after her son Luca, whom she had in March 2012 with now ex-husband Mike Comrie. A source told E! News last September that Koma is a "great stepdad" to Luca, and that the couple was in no rush to put a ring on it because they "already feel married."

Now that their baby girl is born, it looks like they're ready to be husband and wife! Because why not (why not) take a crazy chance? Congratulations to Duff and Koma on this exciting next step. I can't wait to hear about plans for the wedding, and in the meantime, I'll be blasting So Yesterday on repeat.