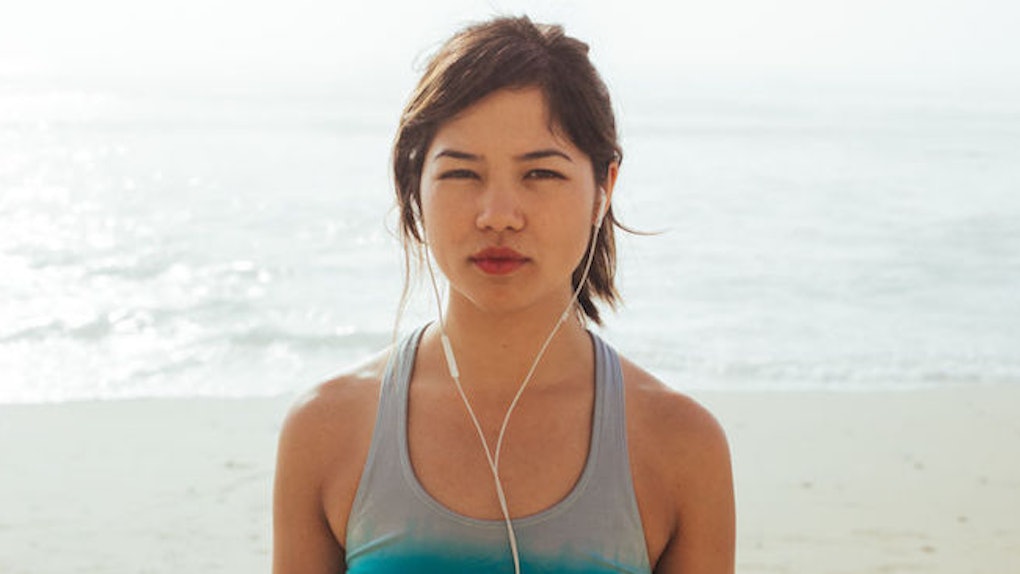 Here's Why You're Not Motivated To Work Out, Despite Your Best Intentions, According To Science

You swore it would never happen again, but here you are: sprawled out in bed, watching The Office, even though you'd promised yourself when you woke up that you'd definitely hit the gym after work. Some days, all the motivational Pinterest quotes in the world still aren't enough to make you feel like you genuinely want to work out. And, look, on days like that, there's no need to be hard on yourself. But it might make you feel better to know that the reason why you're not motivated to work out, according to the results of a new study, may have nothing at all to do with your mindset or dedication, but rather, some stuff happening in your brain that, TBH, you have no control over.

The study, which was carried out by researchers from the University of British Columbia, found that, despite our best intentions, we human beings are, sadly, becoming more and more inactive over time, according to ScienceDaily. And while you might be quick to chalk that up to not having enough willpower or failing to motivate yourself enough, this study suggests that the human brain might innately be more attracted to a sedentary lifestyle. Matthieu Boisgontier, senior author of the study, said in a statement,

Conserving energy has been essential for humans' survival, as it allowed us to be more efficient in searching for food and shelter, competing for sexual partners, and avoiding predators. The failure of public policies to counteract the pandemic of physical inactivity may be due to brain processes that have been developed and reinforced across evolution.

In order to figure out why it can be so hard to choose the gym over the couch, Boisgontier and his colleagues recruited 29 young adults to participate in an experiment while electrodes recorded their brain activity. The researchers sat the participants in front of a computer and flashed images, one at a time, depicting either physical activity or inactivity. The subjects were told to move an avatar toward pictures featuring physical activity, and away from photos of inactivity, as quickly as they possibly could. Then, the subjects repeated the same process, except they moved the avatar away from depictions of physical activity, and toward photos of inactivity.

According to the study's results, which have been published in the scientific journal Neuropsychologia, the researchers found that the subjects were, for the most part, much faster at moving toward the active depictions and away from the inactive ones, but here's the kicker: Apparently, the electrodes showed that moving the avatar away from inactive photos required the subjects' brains to work a lot harder. In other words, avoiding your Netflix marathons requires a whole lot of mental effort, and, IMO, those lazy vibes make so much more sense now. Boisgontier explained his team's findings in a statement,

We knew from previous studies that people are faster at avoiding sedentary behaviours and moving toward active behaviours. The exciting novelty of our study is that it shows this faster avoidance of physical inactivity comes at a cost — and that is an increased involvement of brain resources. These results suggest that our brain is innately attracted to sedentary behaviours.

Now, I know the results of this study probably aren't very comforting at first glance. Because, like, apparently, all your brain wants you to do is be as lazy as humanly possible, fitness goals be damned. But here's the thing: You don't always have to be a slave to your brain. The beauty of being a human being is that you're a complex person — your brain can spit out certain thoughts, but you don't always have to act on them, or even listen to them. At the very least, this study brings awareness to the way your brain works behind the scenes, and as a result, you can let yourself off the hook a little when, for one reason or another, you're just not feelin' a workout.

Allen Michael, a spokesperson and editor for the online workout guide Simple Fitness Hub, knows the struggle of staying motivated himself, but he tells Elite Daily that there are two easy ways to feel inspired and override that tricky, innate attraction to laziness.

First, he says, try finding a partner who's down to get sweaty with you. "Studies have shown that working out with a partner increases exercise frequency, and it's more fun as well," he tells me over email. According to Michael, it's easy to fall out of your workout routine when you're the only one vouching for yourself, but when you add a partner to the picture, you also add accountability. "You can share your workout goals, and hold each other accountable to staying on-target week in and week out," he explains.

Honestly, though, partner or no partner, some days you just don't feel like making the effort to go all the way to the gym. "Not only does the gym cost money every month," Michael says, "but you have to factor in the time to get there and back." Plus, he says, there's the issue of waiting around to use a machine if it's especially crowded at the gym. If you don't feel like dealing with any of those roadblocks, Michael recommends maintaining your motivation by working out at home. That way, he explains, you'll feel accomplished, satisfied, and you'll get to face-plant into your bed immediately after you're done. That's what I like to call balance at its finest.

More like this
25 Instagram Captions For Workout Pics & Being A #Boss In The Studio
By Marisa Casciano
I Tried Singing While Running Like Miley Cyrus & OMG, My Lungs
By Rachel Varina
These Creative #EcoHacks On TikTok Encourage Green & Waste-Free Living
By Marisa Casciano
Stay up to date