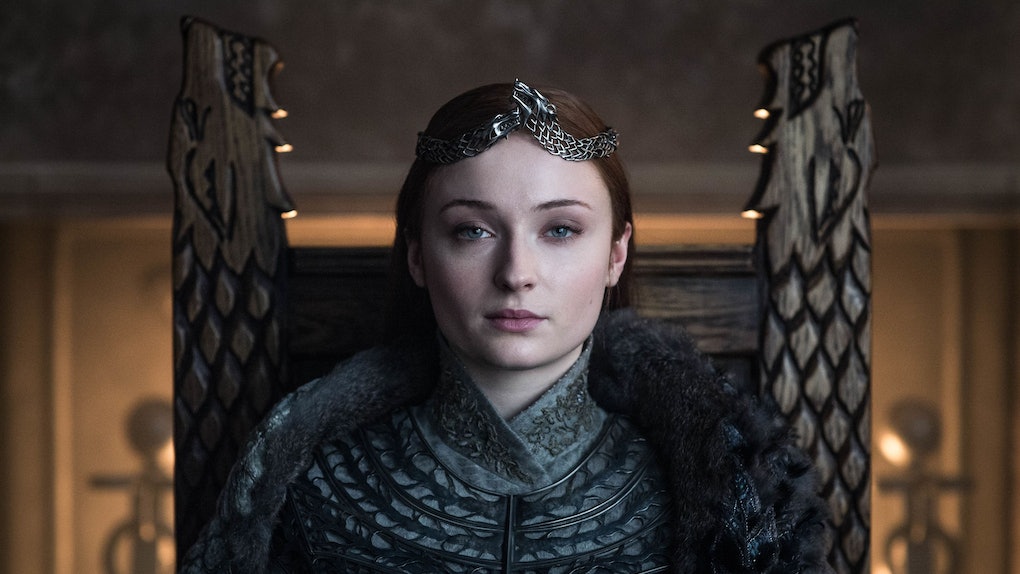 From the moment Arya flew out of the darkness and stabbed the Night King in the heart, Game of Thrones' final season has been steeped in controversy. From feeling like Daenerys got done dirty with her ending to frustrations with the idea of Bran's being voted to lead Westeros, many viewers complained the leading characters didn't seem to get their due. But Sansa's ending on Game Of Thrones was different. Unlike everyone else on the show, the eldest Stark daughter got exactly what was owed to her: The North.

Sansa's journey to empowerment was a long and challenging road, but also one of the most satisfying on Game of Thrones. Unlike Arya, she wasn't a wannabe tough from the beginning who wound up becoming one of the deadliest women on the planet. Daenerys may have started out an innocent, but she grew into a leader double-quick by Season 3. Cersei slowly loses everything to gain a kingdom, but she started as a fully grown adult.

Sansa, on the other hand, is a child when viewers meet her, a fairy-tale loving girl who commits herself to the household arts, believing that marrying a prince is be all end all of every girl's dream. Her outfits from the first season reflect her innocence, her naivety.

The death of Ned Stark is when Sansa's education in the reality of the world begins. And yet, at every turn she keeps the rose-colored glasses on. She may be absorbing Cersei's ruthlessness, but she's still naive enough not to question Ser Dantos giving her a necklace. She may be observing Lady Olenna and Margaery's power plays, but she doesn't recognize what a kindness it is when Tyrion agrees not to sleep with her. She may have figured out how to play Littlefinger, but she doesn't understand what a danger it is to give herself over to Ramsay Bolton as his wife, effectively becoming his property.

And with every mistake, she pays the price of not learning fast enough.

However, slowly, Sansa learns both how the power brokers play the game as well as how others use her as a pawn. She also learns the value of retail politics, both at the small-folk level and at the highborn one. By the time she takes back Winterfell (and make no mistake, she won the Battle of the Bastards), she's the smartest Stark on the board, a lesson Arya learns fast upon returning home.

Sansa might not get Jon returned home to her at the end of the series, but she gets something far more critical. Since taking charge as the Lady of Winterfell, the North's independence has been her top priority. For decades the Wardens of the North attempted to keep out of Southern affairs, but Sansa's seen that won't always work. The only way is to stay independent, and the moment she gets a window of opportunity to grab that brass ring, she takes it. It's not like Bran will refuse her, and besides, she has the argument that the North's sacrifice in defeating the Night King means they've earned it.

So while Bran may be trying not to deal with fools as king, and Tyrion is suffering them as Hand, while Brienne takes over the Kingsguard, and Arya sets sail for lands unknown, Sansa gets precisely what she played the game for. She's queen, but not a queen who has to manage kingdoms she doesn't care about, or one with a target on her back for other players to take aim.

She's Queen in the North, and the cheers for her coronation are the last lines spoken in the entire show. I stan the real winner of the Game of Thrones, and so should you.