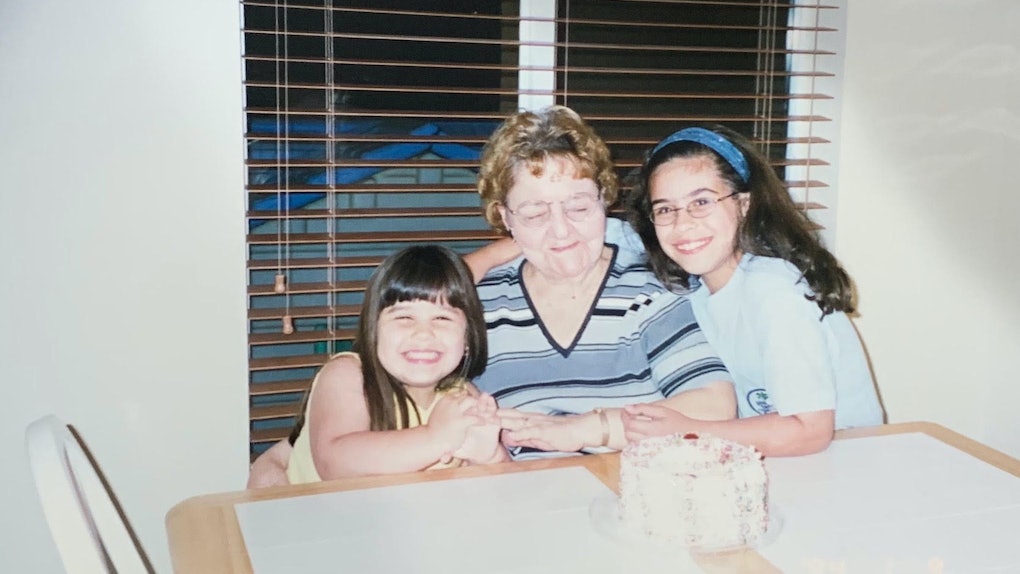 This essay is part of Más Que Suficiente, More Than Enough, an Elite Daily series that celebrates the parts of Latinx culture that make each writer proud of their identity. In this piece, writer Paola de Varona shares why her family's experience with the supernatural makes her feel connected to her Cuban roots. Para leer este ensayo en español, desliza hacia abajo.

Before I was tall enough to peer over the kitchen counter but old enough to remember trying, I saw my mamá cry while washing dishes in the sink. The tears dripped from her eyes down to her cheeks, and into the soapy foam covering her hands and the plates beneath her. In between scrubs, she brought her palms up to her face, taking in sharp breaths that made her whole body shake. Years later, she told me how, in that moment, after catching a strong floral scent permeating from the suds, she felt her late brother's presence, and it made her sob. It wasn't the scent of the dish soap, but rather, something stronger, like the memory of fresh cut flowers that marked his presence in the room. He’d always return to her side in the years that followed, making himself known through the flowery fragrance that came as quickly as it went.

For as long as I can remember, spirituality and the supernatural have colored my life. My family of devout Catholics keeps prayer cards like baseball trading cards — “Jesús Confío En Ti” for times of struggle; San Dimas for recovering lost things. Growing up, my mamá, my sister, and I would often gather around the fold-out kitchen table in my abuela’s South Miami apartment, and I’d lean in eagerly as they recounted their run-ins with the supernatural, like telling ghost stories around a campfire. At the time, I had never experienced the dreams or intuitive feelings they described, but their words painted magic for me in the most unlikely places. The supernatural sparks made their way into our dreams, into our regular daily tasks, and they certainly ran in our family. Throughout my upbringing, the ghost stories these three generations of Cuban women would tell may have seemed far-fetched to the outside world, but to me, they felt distinctly like home.

Latinxs tend to be traditionally superstitious people, deeply in touch with the spirituality and traditions rooted in Catholicism and indigenous religions like Santería. A Pew Research survey conducted in 2013 found 57% of Latinx respondents in the United States alone believe people can be possessed by spirits, and 44% said magic, sorcery, or witchcraft can influence people’s lives. Nearly half of Latinxs surveyed said they pray to saints to ask for help when they face difficult moments in their lives, with some even making offerings to these same entities, whether by lighting candles at church or placing fruits out for them in their own homes. These practices reflect both traditional Catholic practices, as well as indigenous or Afro-Caribbean religious traditions.

In Cuba, Catholic traditions and Santería (practiced by an estimated 80% of the island’s population, according to Cuba’s Department of Historical Cultural Investigations) often go hand-in-hand. Santería developed in Cuba in the 16th century out of necessity, by the people of the Yoruban nations of West Africa brought to Cuba as slaves. In order to maintain their religion, West African slaves living in Cuba prayed in secret by superimposing their orishas (Yoruban deities) on Catholic saints. Santeria developed into a blend of both the Yoruban tradition and aspects of Catholicism.

These superstitions are second nature to me, like driving home on autopilot.

Made up of a melting pot of ethnic origins, Latinxs similarly borrow their superstitions from a hodge podge of cultures and traditions found across the globe. Much of the Caribbean superstitions that remain intact today have been modified from European, African, or Asian traditions. Mal de ojo, or evil eye, a widespread Latinx belief, can be traced as far back as Roman, Greek, and Islamic cultures. To combat the “envious” lingering gaze from strangers and relatives, I wore an azabache, an onyx charm hung from thin gold necklaces or bracelets. When the clock strikes midnight on New Year’s Eve, chances are Latinxs all over the world are scarfing down 12 grapes, a tradition traced back to Spanish origins. Each grape symbolizes the hopefully lucky and prosperous months of the year. Some even say the tradition wards off witches and evil spirits. Others use the stroke of midnight to circle their block with an empty suitcase, hoping to ensure a year of plentiful travel. The tradition can be traced back to the superstitions of multiple Latin American countries. Catholic Theologians have historically even supported supernatural dreams as a form of spiritual guidance.

These superstitions are second nature to me, like driving home on autopilot, but my favorites are the stories I’ve heard time and time again; the legends that reverberate off the walls of my household. My mamá likes to tell the story of her childhood home in Cuba, where she’d often see a man in a pageboy hat and long trousers standing in the doorway of a spare bedroom, beckoning her toward him. It wasn’t until my grandmother pulled out a yellowed photo of his familiar face that they finally deciphered who he was: the grandfather my mother never got a chance to meet. My abuela assured her he simply wanted to be remembered, so she hung his photo on the hallway wall. After that day, he only returned to my mamá in her dreams, and for reasons unknown to her, always from the waist down. Somehow, she always recognized his presence in her dreams, speaking to her despite being voiceless; a steady hand through some of her life’s most fraught moments.

The smell of wildflowers has always followed the women in my family wherever we go. When I was in elementary school, a fugitive running from the police wandered onto my campus, resulting in a school-wide lockdown. Crowded in the cafeteria, my friends and I played games to distract ourselves from the barricaded doors. My mom, who was nearby at the doctor’s office with my sister, heard the news and rushed to sign me out. Back in the stuffy lobby of my pediatrician, my sister raved about the aroma of fresh lavender coming off my scalp. “Your hair smells so good, like flowers,” she kept telling me, but mamá couldn’t smell it, telling me instead that I was in need of a good shower. We knew then that it was her brother keeping me safe. As these experiences grow fewer and farther between, my mother, sister, and I laugh about all the protectors we’ve had, keeping us out of harm’s way. Cubans, go figure, are even overprotective from the “beyond.”

Even as a 10-year-old who couldn’t ride the Haunted Mansion ride at Magic Kingdom without a fit of tears, I was never afraid of these supernatural moments. For one, I’d never experienced the dreams or sensations the women in my family had. I was a happy bystander, never given “the gift.” My family has never experienced malicious ghosts, or cheap scares. Instead, these tales feel like threads of the aspects of Latinidad I love the most: the tight bond between la familia and their unwavering support. The fact that a calm, familiar voice and a late night café con leche around the kitchen table can lead you to clarity when you’re struggling. My white friends speak of ghosts and spirits like cautionary tales, or haunted house gimmicks. Horror films show the supernatural as a product of the demonic and cursed. But what makes my experiences different is seeing it through the lens of my culture. What is rooted in history and in my ancestors isn’t foreign or fearful – it’s simply another connection to what makes me Latina.

Walking to my bedroom not too long ago, I sensed the smell of lavender trailing down the hall. It lingered by my bookshelf, like spilled agua de violetas. I took in deep, steady breaths, trying and failing to locate the source. Later that evening, my mamá reminded me it was the anniversary of my abuela’s death. Perhaps it wasn’t until her passing that I finally gained my own guiding spirit. I prayed to her that night (not something I do often), and felt a connection stronger than I had ever known — to my mother and sister, to the stories we love to rehash at our table, and to the island that breathed magic into the women around me.

More like this
This Couple Met On BLK & Shares A Deep, Spiritual Connection
By Veronica Lopez and Hannah Orenstein
The 4 Best Zombie Board Games
By Jenny White
Bella Thorne's "Phantom" Reveals The Lessons She's Learned About Healthy Relationships — EXCLUSIVE
By Brandy Robidoux
Stay up to date