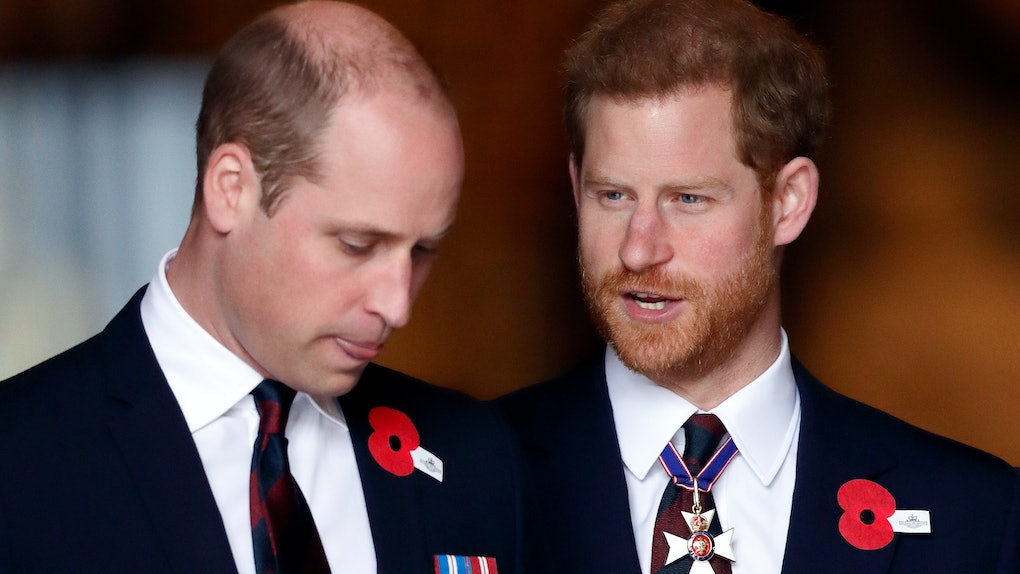 The late Prince Philip's funeral is set to be held on April 17 on the grounds of Windsor Castle, and the royal family is tying up loose ends on what the ceremony will entail. There are many details to consider, including what attire the family will wear for the ceremony, and where each family member will stand during the procession. For those hoping to see some brotherly love between Prince William and Harry, you might not want to hold your breath. They won't be standing next to each other, but there's a reason why Harry and William will not walk together at Prince Philip's funeral that has nothing to do with drama.

According to Buckingham Palace, Peter Phillips, the son of Princess Anne, will walk between the two brothers during the initial procession. Then, during the second procession, William will walk alongside and his brother will walk behind them. However, the Palace was incredibly clear that the procession placements had nothing to do with drama between royal family members.

The procession order was "a practical change rather than sending a signal," a Buckingham Palace spokesman said. "This is a funeral and we are not going to be drawn into perceptions of drama. The arrangements have been agreed and represent Her Majesty's wishes."

Another surprising detail of the affair includes the family's decision to forgo military attire. Instead, the entire family will wear civilian clothing, the Queen decided.

Prince Philip passed away on April 9 at the age of 99, and the family has promised the ceremony will be "in line with The Duke of Edinburgh's own personal wishes." As it turns out, this was easy to do under current coronavirus restrictions. The intimate affair will have about 30 people, which is likely what he would have wanted, those who know him best say.

"Ironically, it is probably how he would have liked," former Palace spokeswoman Ailsa Anderson told People. "No fuss, no bother. Right through his life, he never knew what all the fuss was about."

Some details of the ceremony are still being nailed down, but what's most important is that the family is coming together to honor Philip despite recent reports of tension.

More like this
As @Royal_Suitor, Here's Why I'm Dedicated To Defending Harry & Meghan
By R.S. Locke
Royal "Experts" Said Meghan Markle's 'The Bench' Sends Coded Messages To The Firm
By Brandy Robidoux
Who Will Play The Fantastic Four For Marvel? Twitter Has So Many Ideas
By Dylan Kickham
Stay up to date