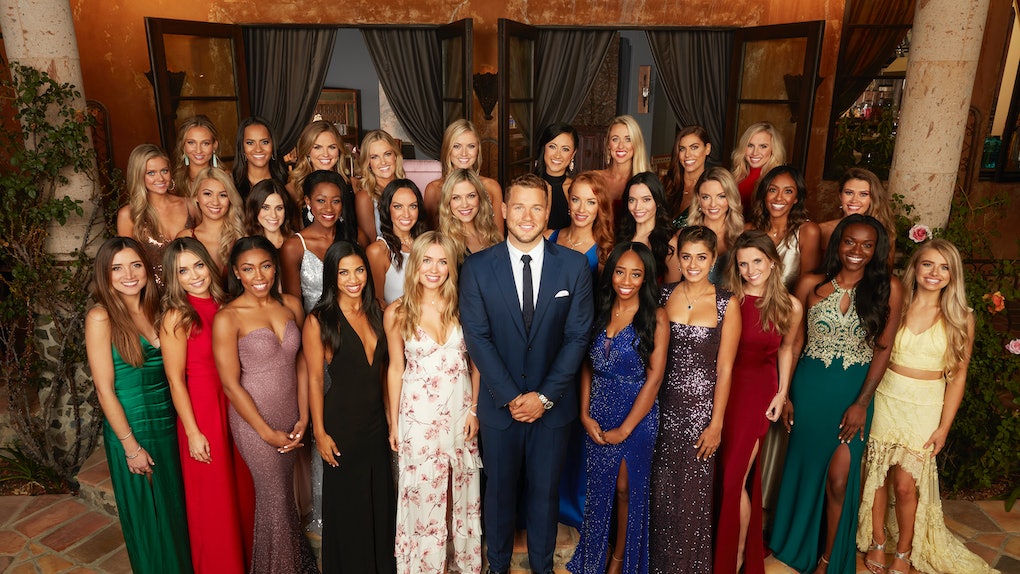 Here's Which 'Bachelor' Contestant You Are Based On Your Zodiac Sign

Your Bachelor viewing parties may not be the type of hangouts that Chris Harrison crashes with ABC cameras, but with every Bachelor group watch comes the process of identifying with a contestant whose witty one-liners and facial expressions match exactly how you or a friend feels. The Bachelorette has its hunky eye candy, but The Bachelor's mostly female audience has plenty to relate to while watching these women cope with living together and vying for the same guy. It's like a heightened version of college dorm life, but this hallway party always has someone you relate to more than usual. In case you're interested, here's which Bachelor contestant you are based on your Zodiac signs.

If you already feel like Bachelor mainstay Ashley I., you're probably up to speed with the personality traits of certain Zodiac signs and what the stars predict about signs' romantic compatibility. Even if you turn your nose up at how seriously some people follow their horoscopes, there are some details about each sign that are way too accurate to ignore, and prime examples of this play out in each new cycle of The Bachelor. I'd definitely read a study on which Zodiac signs have performed the best on the show, but for now, I'll consult astrology to learn which ladies from the show are more similar to me than I may think.

Mostly based on contestants' actual Zodiac signs, our lineup below features some of the past few years' most memorable women in Bachelor Nation. Are you going to follow their Instagram accounts and comment "same" on your Zodiac twin's pics?

When Bachelor Nation last saw Season 23's Hannah Brown, she was having a bit of a meltdown, but her calmer moments demonstrate some of the Capricorn's greatest qualities. Although she's a Libra IRL, Hannah's determination in telling Colton Underwood the truth about fellow pageant girl Caelynn captures Capricorns' longing to achieve exactly what they want. While they're analytical and confident, Capricorns also struggle with being too hard on themselves, which viewers saw Hannah succumb to upon the thought of another week on the show with Caelynn. As fans, it's difficult to determine whether Caelynn or Hannah is in the wrong about their shared past, but Hannah's Capricorn tenacity could make or break her during the ongoing Bachelor season.

Some fans nicknamed Season 22's Bekah Martinez "Baby Bekah" because of her young age, but her classic reactions and mature analysis of situations captured an Aquarius' tendency to be an energetic intellectual. You've probably seen Bekah deftly tackling several of the franchise's off-camera scandals in recent months, and this is proof of her Aquarius trait of tuning into events around her in order to understand both sides of a situation. While she's firm in her beliefs, Bekah's individuality sets her apart from the pack, and her vlogs tracking her pregnancy are honest in a way that few other motherhood outlets are.

Ashley Iaconetti of Season 19 has made the ultimate Pisces match in her engagement to Bachelorette alum and Scorpio Jared Haibon. Known for their emotional openness, a Pisces' willingness to discuss the minutiae of their feelings is right up a Bachelor contestant's alley. This is definitely why Ashley's crying confessionals and long-winded breakdowns of her thoughts have become the stuff of legends within the franchise. She doesn't hold anything back, and although it often put her in an awkward situation, her constant vocalizing of her feelings for Jared was worth it in the end. Pisceses generally aren't drawn to short flings, and they crave intimacy in their relationships, which also explains Ashley's excitement about introducing her Bachelor Winter Games partner Kevin Wendt as her boyfriend.

Dubbed as Season 20's villain, Olivia Caridi got the short end of the stick, but her cringe-worthy declarations actually showed off an Aries' strongest qualities. Associated with the ram, an Aries is assertive and blunt, meaning that he or she may make an uncomfortable statement without thinking it through. Remember when Olivia upset the other women with her teen mom remark about Amanda? The podcast host has since explained that she had no ill intent behind the comment, but the Aries' tendency to act independently can often rub off on others the wrong way. The sign is also known for its competitive nature, as seen when Olivia received the season's first impression rose. While such a quality in a heightened scenario can be unflattering, this kind of determination is definitely something to celebrate.

As a former Bachelorette who knew exactly how to show the men the door if they misbehaved, Rachel Lindsay is franchise royalty, and we love her too much to leave her out of this roundup. A Taurus is smart and hardworking, and Rachel's law career came in handy when she wouldn't let any troublemakers distract her from her goal of landing a life partner.

Like an Aquarius, Tauruses will listen to someone else's perspective, but the chances of them wavering on their own opinion are slim. Remember how determined Rachel was to end The Bachelorette with an engagement? She also bears the Taurus quality of wanting total honesty in love, and she admitted that she used her season's fantasy suite time to ask the remaining men important questions she needed to know about a potential partner. Basically, if you're a Taurus, you can rightly use both a Rachel GIF and the "Lawyered" GIF from How I Met Your Mother in a text conversation.

Future Bachelorette Kaitlyn Bristowe made a memorable first impression when she coined a sexual joke on Chris Soules' Bachelor season, but that witty wordplay wasn't just a Night One gimmick. As a Gemini, she's energetic and always willing to look on the bright side of life. No surprise, but the sign is also known for being the highlight of every party. As one of many podcast hosts in Bachelor Nation, Kaitlyn's Gemini traits of chattiness and openness are perfectly attuned to the job's requirements. In her position as the Bachelorette, Kaitlyn was also as aware of the men's true intentions as Rachel was, emphasizing the Gemini's tendency to be a truthful presence in others' lives.

Taylor "Emotional Intelligence" Nolan was the castoff in Season 21's two-on-one date, but her astrology sign proves that her emotional awareness isn't a ruse. Cancers are known for being sentimental and emotional, and one astrology website even describes them as "practically psychic." Those born under this sign feel a certain confidence about relationships and people before they even know what will happen with them, which may explain why Taylor's Bachelor in Paradise relationship with Derek Peth was so steady and low-key compared to other volatile pairs on their season. While sympathetic and loyal, Cancers usually avoid conflict, hence why Taylor stumbled on Nick Viall's season when she clashed with Corinne.

Raven Gates' confidence and optimistic attitude made her a standout on Nick's Bachelor season, and her initial introduction as a boutique owner was a perfect example of the Leo's hard-working qualities. Women from Nick's season still frequently post group pics together, and as a friendly and generous Leo, Raven is often at the center of these shots. Represented by the loyal lion, Raven's shining franchise moment was when she returned to Bachelor in Paradise to warn her hometown BFF Tia Booth about Colton Underwood's intentions. The two's relationship was a flop, but Raven taking the time to speak to Tia was a Leo moment to be proud of.

Virgos have a reputation of being more introverted and quiet, but Season 22's Bibiana Julian is more representative of the sign than people may think. Virgos are extremely observant, which Bibi displayed during her Paradise stint of playing the role of guidance counselor to struggling contestants. In relationships, they also struggle in cracking their tough exterior and opening up to someone. During Bachelor Winter Games, Bibiana ran into this problem when her relationship with Australian contestant Jordan suddenly grew serious.

Because they are so analytical, Virgos also struggle to believe that a good thing is coming their way, and when Bibi recently hinted she was in a new relationship with a non-Bachelor man, she emphasized "tread[ing] lightly." If you're in a similar scenario, it's time to move past the Virgo stereotype and see what happens when you let love in!

Libras are generally peaceful people, and although she fell into some drama on Season 22 of The Bachelor, fitness coach Krystal Nielson was initially introduced as a typical Libra lady. Emotionally torn about her brother living on the streets at the time, Krystal was diplomatic when telling ABC cameras, but you could tell that like many other Libras, she wasn't a fan of the injustice that led her brother to that point. Often feeling responsible for others, Krystal's Bachelor intro package even included her making meals for the homeless.

Despite the Libra's love for harmony, Krystal's Bachelor antics also included her sign's tendencies of holding a grudge (remember the needle d*ck fiasco?) and avoiding confrontation when she was caught in Paradise love triangles. However, now that she's engaged to fellow Paradise alum Chris Randone, Krystal is in her astrological prime, as Libra is reportedly the sign of marriage.

Anyone watching Colton's season is definitely reminiscing about Season 21's Corinne Olympios when they watch contestant Demi lustfully pursue the Bachelor. Although she wasn't afraid of sexually charged stunts to get Nick Viall's attention, Corinne was best known for her one-liners. Capturing a Scorpio's resourcefulness and strength in holding her own in confrontations, Corinne was also an assertive woman who delighted in achieving a certain goal, aka earning a rose week after week. Rather than running the opposite direction during conflict, Scorpios love debating others, hence why Corinne's arguments with the other women were always lengthy affairs. Scorpios are also the most sensual partners, explaining why Corinne's love language with Nick often seemed to be physical affection.

Caila Quinn was almost the Bachelorette, and this Season 20 contestant's love of adventure would've made her a fun woman to watch. As a Sagittarius, she would have been generous toward her Bachelorette men, likely taking a philosophical approach to the process. Following the show's decision to cast JoJo Fletcher as the new Bachelorette, Caila took the news in stride by moving to New York and utilizing the Sagittarius trait of curiosity to deal with the disappointment. When she returned to the franchise for a summer on Bachelor in Paradise, she found herself in a love triangle, but the Sagittarius dislike of people's clingy nature came through in her honest approach to the situation.