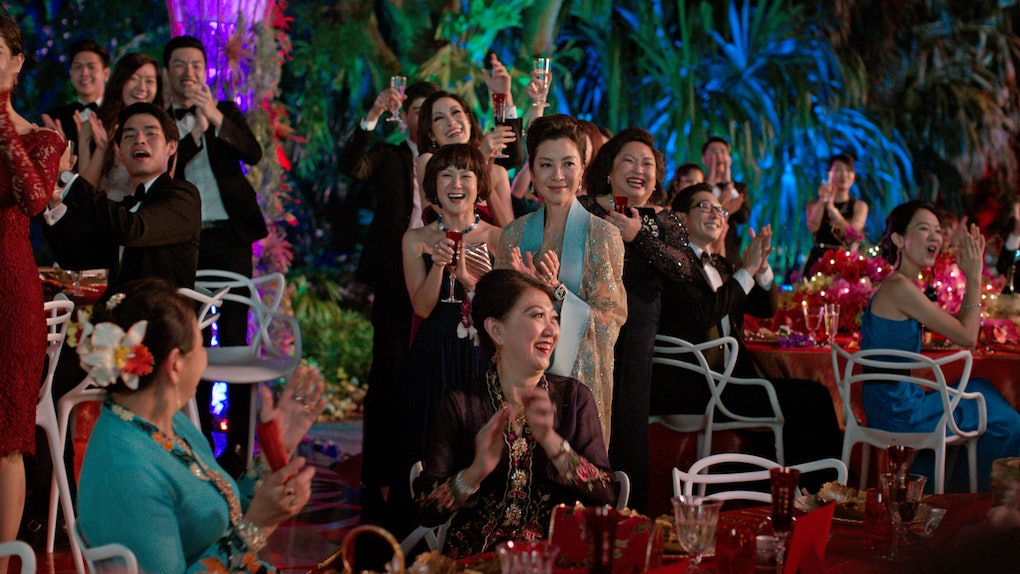 The best part of the romantic comedy revival is when it gets cold and dark outside, there are plenty of joyful romcoms to keep you warm on the inside. Netflix has plenty, from The Kissing Booth to To All The Boys I've Loved Before, but most can agree The Romcom Of 2018 was Crazy Rich Asians. By the time it was done in theaters, the film has grossed $174 million and scored two Golden Globe nominations. So, how does one watch the movie at home? Here's where to stream Crazy Rich Asians this winter, so you can enjoy the laughs over and over.

In case you missed it, Crazy Rich Asians was nominated for both Best Comedy and Best Actress In a Musical or Comedy for lead Constance Wu, who plays Rachel Chu. Wu's nomination was history-making, as it's been over 44 years since an Asian woman has been nominated in this category. The last was Yvonne Elliman, who was nominated for her role in Jesus Christ, Superstar back in 1974. In all, only four women of Asian descent have ever been nominated in this category over the awards' 76-year history, the others being Miyoshi Umeki for 1961's Flower Drum Song and Machiko Kyo for 1956's The Teahouse of the August Moon.

So, where to stream this history-making film that put romantic comedies back on the map? Crazy Rich Asians has been out on Digital HD since the beginning of November, which means it's available both for rent and purchase via all digital retailers. Those include the usual suspects of iTunes and Google Play, as well as Vudu, YouTube Rentals, and Amazon, plus newer places like Fandango Now and Microsoft Movies & TV. Also, the Disney-backed Movies Anywhere has it in their stores, which allows you to stream it to any number of digital devices, not just on the one you happen to be on when downloading.

Sadly, Crazy Rich Asians is not on Netflix, and it's not clear if it will ever be, as the film is owned by Warner Brothers. Why does this matter? WarnerMedia announced back in October it was preparing to launch a streaming service, not unlike Disney+, starting in late 2019.

To that end, again, not unlike Disney, it too will start to pull content from Netflix in preparation for launch, such as Friends, which is one of Warner Brothers' more valuable assets. It will be leaving Netflix at the end of next year. So, chances are Crazy Rich Asians will be held until the service launches in 2019.

But this doesn't mean fans should wait to watch. Even though the film isn't streaming for free, the rental prices are low, and renting (or buying) the film via places like iTunes means one can access all of the bonus features, plus deleted scenes and the commentaries, which in this case are by director Jon M. Chu with Crazy Rich Asians novelist Kevin Kwan.

More like this
Here's How To Stream 'Nomadland' So You Can Finally Get The Hype
By Rachel Varina
Here's How To Watch 'Promising Young Woman' For Free If You're A College Student
By Ani Bundel
'Downton Abbey 2': Release Date, Cast, Trailer, Photos, & More
By Ani Bundel
Stay up to date