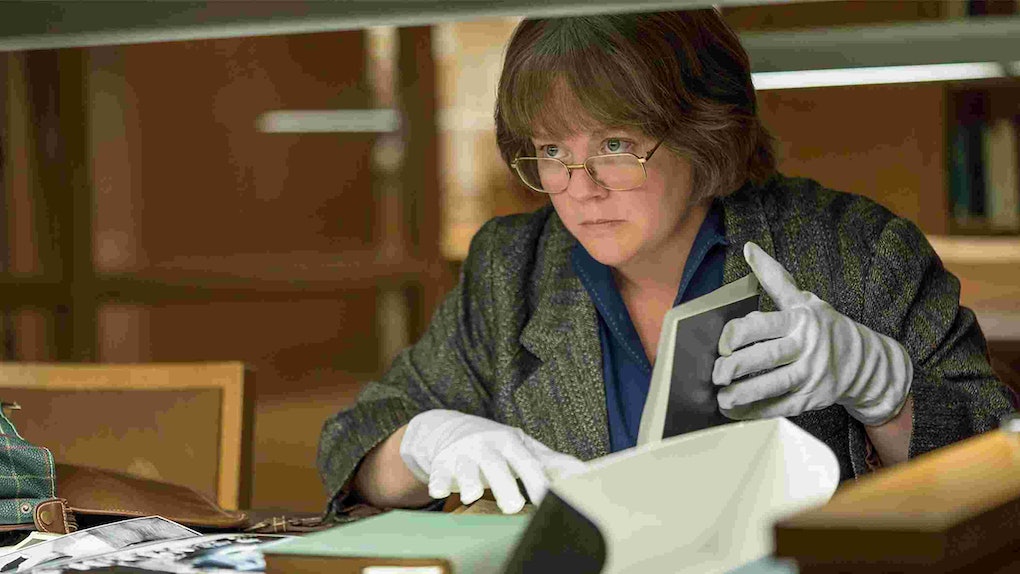 Here's Where To Stream 'Can You Ever Forgive Me?' So You Can Stay In The Oscars Loop

The last time Melissa McCarthy was nominated for an Academy Award, it was unlikely that many had missed her riotous performance in Bridesmaids. Although McCarthy is celebrating her second Oscar nomination this year, fans might have lost track of her work in Can You Ever Forgive Me? during a crowded awards season. We all need to be as informed as possible when prepping our Oscar winner predictions, so here's where to stream Can You Ever Forgive Me? if you still need to watch McCarthy's dramatic performance.

Based on a true story, Can You Ever Forgive Me? follows McCarthy as struggling writer Lee Israel. Fighting to stay relevant in the publishing industry and earn enough money to live, Lee turns to forging letters from dead authors to ease her financial troubles. When booksellers begin to question the validity of her letters, she sends her drug-dealing friend Jack (Oscar nominee Richard E. Grant) to sell her work. As Lee resorts to riskier methods to make new material, the pair's scheme leads to the possibility of putting Lee's entire career in jeopardy.

While it's not available for instant streaming on any platforms yet, Can You Ever Forgive Me? is currently watchable through Amazon Prime, iTunes, Google Play, and Vudu. You can buy the movie for $14.99 or rent it for $5.99 on all four services. Either method is much cheaper than a night out at the movie theater, so get your popcorn ready!

In addition to acting nominations for McCarthy and Grant, the movie received a nod in the Oscars' Best Adapted Screenplay category. Nicole Holofcener and Jeff Whitty's script also just won the Adapted Screenplay prize at Feb. 17's Writers Guild Awards, which may bode well for the movie's chance at victory on Oscar Sunday. After all, what appeals more to other writers than a film all about the written word?

"I think I made a movie that's a better indication of what writing actually feels like and what the lifestyle of being a writer is than most things are," Can You Ever Forgive Me? director Marielle Heller tells Elite Daily at the Writers Guild Awards in New York. "The truth of the matter is that the life of being a writer is painful and you tend to toil away it for a long time."

McCarthy has also discussed what parts of the reclusive Lee stuck out to her, telling Deadline:

It didn’t make things easier for her at all, being caustic and tricky, but I thought especially in today’s world where everybody needs so much validation from other people on social media, I just loved the thought of Lee being like, 'I don’t need you to like me, I don’t even really want you to like me.'

It's not as flashy as some of the favorites to scoop up Oscar glory, but Can You Ever Forgive Me? is perfect for a cozy night in before the Academy Awards. Happy streaming!

More like this
Where Is The 2021 Oscars Ceremony Being Filmed? The Location Is So Different
By Umber Bhatti
Here's How To Stream 'Nomadland' So You Can Finally Get The Hype
By Rachel Varina
Here's How To Watch 'Promising Young Woman' For Free If You're A College Student
By Ani Bundel
Stay up to date