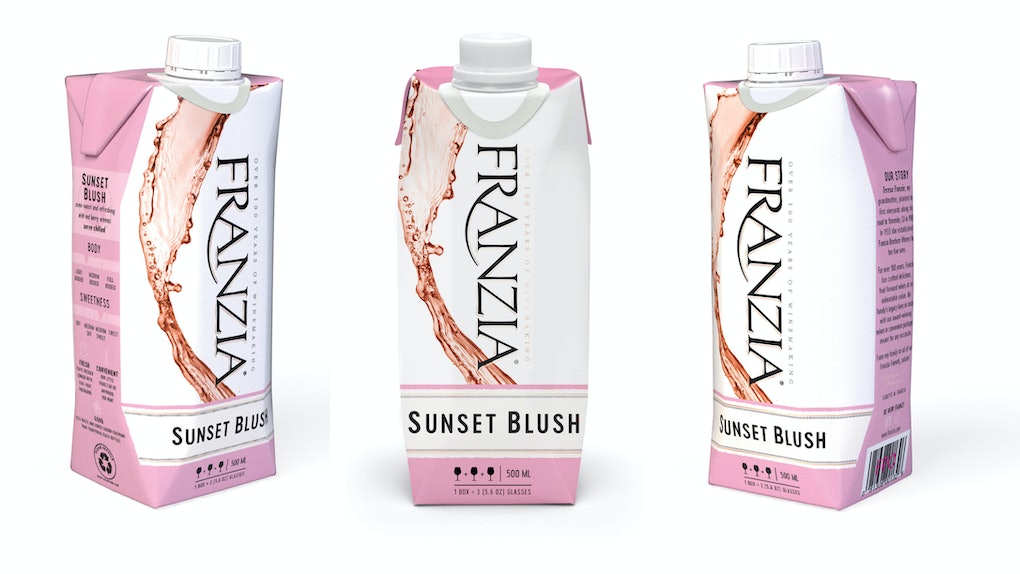 Like most wine-drinking millennials out there, I am totally on board with the popular trend of sipping my favorite drinks from personal-sized cans and downsized boxes. I mean, really — opening a big glass bottle and lugging around giant cardboard boxes can be a major hassle. And in case you haven't heard, Franzia just announced mini versions of their classic boxed flavors, and honestly, they sound absolutely amazing. So, here's where to get Franzia's "Little Franz" mini boxed wines, if that sounds like your cup of tea... er, box of wine, I suppose.

On April 3, Franzia released tiny portable versions of their classic wine boxes called "Little Franz" mini boxed wines, giving a nod to millennials nationwide. According to the press release, they come in four tasty flavors, which include: a dry, crisp Chardonnay, a light and fresh Pinot Grigio called Colombard, a fruity Rosé called Sunset Blush, and a floral sip which they've called Crisp White. They're incredibly portable; they sound pretty dang delicious (that Sunset Blush totally has my name on it!); and the best part of all is you can now buy them in 500-milliliter Tetra Paks. It's a dream come true, if you ask me — and luckily, you can now find them in a wide variety of stores.

Little Franz's national rollout includes major retailers wherever Franzia tends to be sold, according to the brand. It could be sitting on your local grocery store's shelves, or you might be even be able to snag it from your nearest bodega. Really, wherever you pick up the big ol' boxes of Franzia, you'll likely be able to find these little guys there, too. If you aren't entirely sure where to find it, though, definitely make a point to check Franzia's online product locator. Type in your zip code, select your desired flavor, the size (which is 500-milliliter), and how far you're willing to go for it. A few locations will pop up on the map, and you'll be all set. Pro tip: If one variety isn't yielding results, switch it up, because some flavors might be more abundant than others.

In the press release, Jeff Dubiel, the Chief Marketing Officer of Franzia said they're largely catering to younger generations with their latest products. And honestly, they've gotten my attention.

According to the press release, Dubiel said:

While Franzia continues to have a strong pull with Boomers and Gen X wine consumers, the brand’s largest demographic segment is millennials. We want to be sure we’re growing with our customers at all stages of life. This new campaign is designed to reinforce the message that Franzia can be enjoyed at any age and encourages our customers to be ‘Franz for Life’."

Once you've had your fair share of Little Franz mini boxes, make sure to snag a sip of Yes Way Rosé. It's a new pink sip that comes in a sleek can, and it's guaranteed to cater to those #SummerWineGoals. The best part is they're now available at Target.

Don't get me wrong — I'm all about traditional wine bottles and boxes, that is, if you're offering to carry them for me. Little Franz boxes are mad convenient, and they're making way for some pretty solid summer sips. I seriously hope they're selling them at my go-to bodega, y'all... fingers crossed.