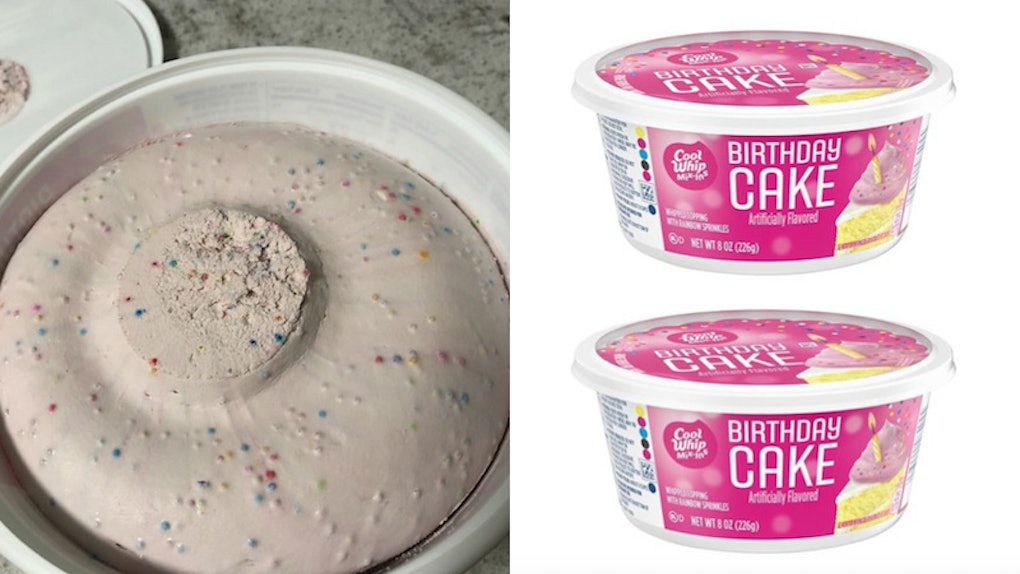 Guys, it looks like there's a new flavor in the Cool Whip Mix-Ins lineup that's about to take your desserts to a whole new level. I'm talking about Birthday Cake, and it's already been seen in a handful of grocery stores. If you're hoping to pick up a carton for yourself, you might be wondering where to get Birthday Cake Cool Whip Mix-Ins. Thankfully, a handful of snack enthusiasts on Instagram have given insight on where the flavor is on sale. Elite Daily reached out to Kraft Heinz to see where the product is officially available, but did not hear back by the time of publication.

Until the new flavor is confirmed in retailers nationwide, you'll have to scan the web and see which stores are ahead of the game. As Bustle points out, Birthday Cake Cool Whip Mix-Ins are already available on Instacart and Hy-Vee. However, it looks like you won't be able to view the price of the new Cool Whip flavor until you log into your account on either website.

Still, The Junk Goat tells Elite Daily that they purchased a container for $1.79 at Schnucks. That makes sense, since a tub of Oreo Mix-Ins are currently selling for $1.49 at Walmart. Elite Daily reached out to Kraft Heinz to see how much money Birthday Cake Mix-Ins officially cost, but did not hear back by the time of publication.

At this point, you might be making room in your refrigerator for the sweet new Birthday Cake Cool Whip Mix-Ins (I don't blame you). But if you can't find the flavor at your local grocery store yet, you can always opt for Cool Whip's Oreo Mix-Ins. Unlike the Birthday Cake Mix-Ins (which include rainbow sprinkles), the Oreo Mix-Ins feature actual Oreo pieces mixed into the Cool Whip. Therefore, you'll be able to add your favorite cookie flavor to any snack you choose.

If you're anything like me, you can also scoop it out of the container on its own and eat it for dessert. Why not, right?