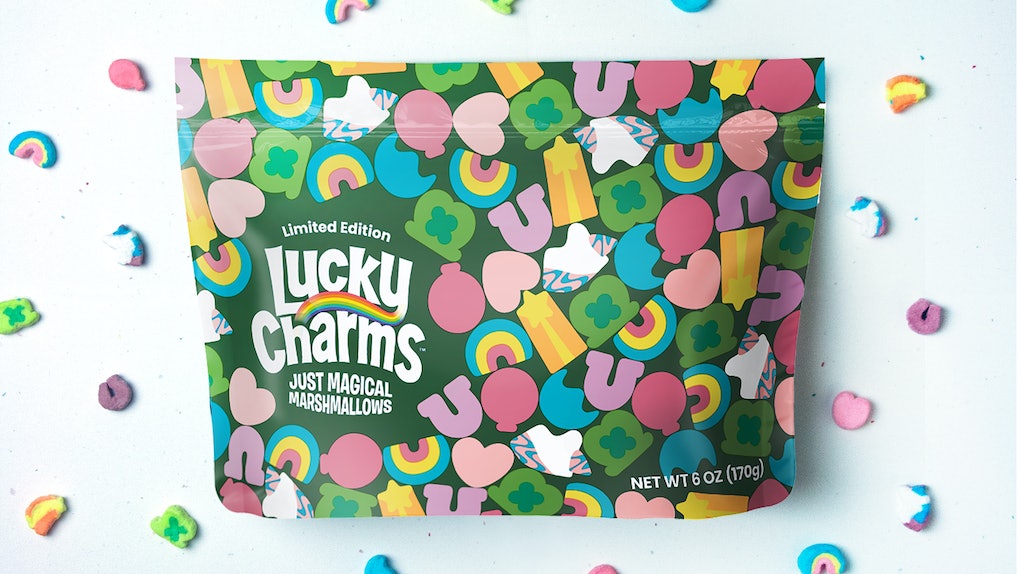 There's a new snack that'll make your inner child go wild. Lucky Charms is releasing limited-edition pouches filled with the sugary marshmallows from the cereal. If you're ready to get in on the magic, here's where to buy Lucky Charms Just Magical Marshmallows.

Lucky Charms unveiled the new bags of Just Magical Marshmallows on Tuesday, Aug. 24, and it marks the first time this sweet treat is available to the public aside from special promotions in the past. The marshmallows usually found in your morning bowl of cereal are now available in a special 6-ounce pouch, which includes all eight charm shapes. It began rolling out to retailers in early September, and it will become more widely available throughout the month. According to the brand, Just Magical Marshmallows are available at "most big box retailers," so keep an eye out on your next grocery shopping trip or Target run. The pouches will only be available for a limited time while supplies last, for a suggested retail price of $3.99.

The announcement comes after marshmallow charms in boxes of Lucky Charms were apparently "losing their magic" in early August. Through the "magic" of the Lucky Charms song, Lucky Charms stans were able to "unlock a magical force never seen before — Just Magical Marshmallows," according to the press release.

So if you were on the hunt for the cereal marshmallows, the wait is over. Just make sure to snap them up before they leave shelves, because they won't be around forever. When you head out to score a bag of 'mallows, you'll want to follow the local store rules as well as the Center for Disease Control and Prevention (CDC) recommendations as of Aug. 3. The CDC recommends you stay home if you feel sick. If you do decide to go out, you'll want to take preventative actions, such as washing or sanitizing your hands, wearing a face mask, and maintaining distance from other people.