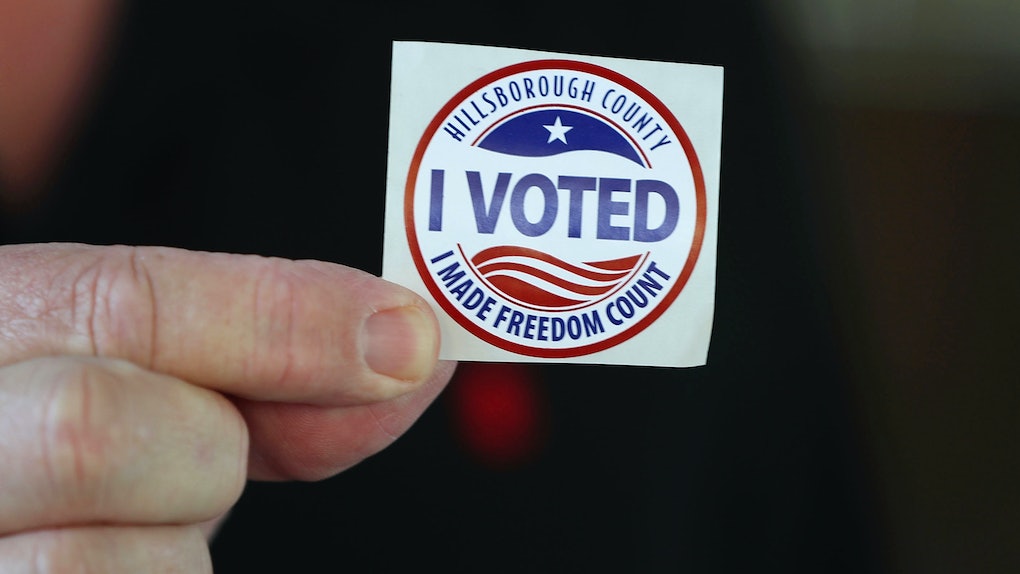 Here's What To Do If You Forgot To Register To Vote, Because These States Have A Solution

Election Day is just so close, and given the wildness that is 2020, it's never been more crucial to rock your vote. But with everything going on this year, it's no surprise if, one morning, you wake up to find that the deadline to register to vote has slipped past before you knew it. Well, here's what to do if you forgot to register to vote, because some states have your back.

According to Vote.org, there's a number of states that allow registration through Election Day. This means voters in these states will be able to register to vote and cast their ballot at their local elections office on the same day, usually during either early voting or on Election Day itself. These states include California, Colorado, Connecticut, Hawaii, Maine, and a handful of others. (Be careful, though — most states require you to go to a special location for same-day voter registration, so don't assume you'll just be able to wing it at your regular polling place.) North Dakota doesn't even require voter registration in order to cast a ballot, so all residents have to do is present a valid proof of ID and residency, with a street address, at their polling location. However, if you don't live in one of the states offering same-day registration, you may have to sit this election out.

Keep in mind, too, that Election Day voter registration generally applies to in-person applications. So if you're planning to vote by mail-in ballot but are counting on same-day registration, you'll probably want to reconsider your plans.

But what if you're sure you registered, but your polling place doesn't have your name? You can always ask for a "provisional ballot," also called an affidavit ballot, which will still let you rock your vote. But of course, there's a catch. When casting a provisional ballot, it's important to remember those ballots aren't counted with regular ballots, and they won't help you if you really did forget to register. These ballots are set aside and double-checked within a few days of the election to confirm voter eligibility and make sure that yes, you are entitled to vote, and then are counted later. If you do end up voting via this kind of conditional ballot, remember to check your state's rules — some states require some kind of follow-up action to prove you're eligible to vote.

For those who really did miss the deadline and don't have Election Day registration to save the day, there are ways you can make up for it, like encouraging others to vote. This year's general election will have repercussions for years to come, and it's never been more crucial to weigh in.

There are some positive signs ahead of this year's election. The most recent national election, the 2018 midterms, saw record voter turnout, with nearly 50% of eligible voters showing up to cast their ballots. It was the highest turnout since 1914, per Vox, and leaps and bounds ahead of the measly 36% of voters who turned out in the previous midterm election in 2014. If the upward trend continues, 2020 may see an even more groundbreaking, record-making turnout.

As October comes to a close, it's time to make your voice heard. No matter who you're voting for, your vote matters — so get out there and cast it!

This article was originally published on Oct. 27, 2018