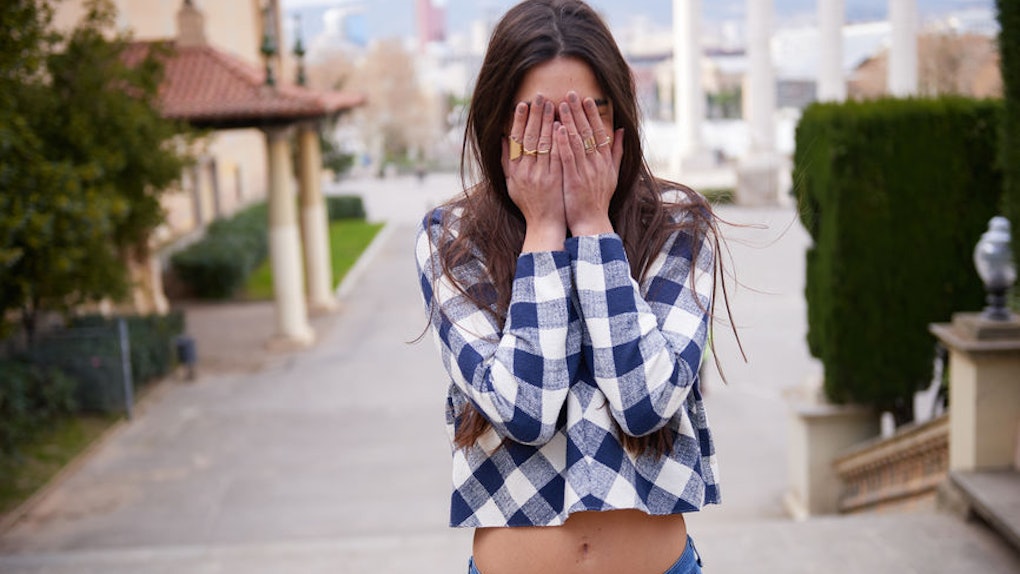 Here’s What To Do If A Condom Breaks, According To Experts

We all know how important having protected sex is when it comes to safeguarding our reproductive health. Generally, condoms (when used correctly) are an effective way to protect against pregnancy and STDs. But unfortunately, condoms are not fail-proof. That's why knowing what to do if a condom breaks is key. Even though this can be an extremely stressful situation to deal with, it's so vital that you don't turn a blind eye or just hope everything will be OK.

According to obstetrician and gynecologist Dr. Sheila Loanzon, condom breakage essentially involves the same risk factors as having unprotected sex would. "Because the condom acts as a barrier preventing direct contact with semen, genital lesions, and discharge from the penis, vagina, and anus, it can be highly effective to prevent transmission of STDs," Dr. Loanzon tells Elite Daily. "If the condom breaks while having intercourse, the risks involved would be for pregnancy and for STDs." But, don't worry: Condom breakage actually isn't as common as you might think.

Since accidents do happen, if you're in a situation where a condom breaks, there are some things you can do to lower your risk of pregnancy and contracting an STD, but there's no guaranteed way to completely dodge exposure to sexual fluids. "When a condom breaks, it’s important to stay calm and slowly remove the condom," certified sex therapist, sexologist, and licensed marriage and family therapist Jenni Skyler tells Elite Daily. "This will help keep as much ejaculate inside as possible. It’s also important to see a health care provider as soon as possible because of the risk of pregnancy and/or STDs."

Thankfully, there are methods that have been proven to lower the risk of pregnancy after unprotected sex. "In terms of pregnancy, if the condom breaks there are several emergency contraception options," says Dr. Loanzon. "The most effective emergency contraceptive is the copper IUD which has a failure rate of less than one percent. Following the copper IUD, there are emergency contraceptive pills such as Ulipristal (used 72 to 120 hours after unprotected intercourse, which needs a prescription from a health care provider) and Levonorgestrel [commonly known as Plan B] (less effective than Ulipristal but is available over the counter without a prescription). It is important that these medications be used as soon as possible after unprotected intercourse to decrease the risk of pregnancy."

Even if you haven't had a condom break, getting tested for STDs regularly is always a good idea. If you have had a condom malfunction, then testing is the only way to know for sure whether or not you've contracted an infection or STD. "With a broken condom, it is best to get STD testing with your health care provider to ensure that STDs like gonorrhea, chlamydia, trichomonas, hepatitis B, and HIV have not been transferred," says Dr. Loanzon.

If condom breakage is something you've experienced frequently, this could mean that the condoms aren't being applied or stored correctly. "You can decrease the risk of a condom breaking by applying it properly," host of the @SexWithDrJess podcast Dr. Jess O’Reilly tells Elite Daily. "Check the expiry date and open the package carefully (don’t use teeth and nails). Roll it down gently to the base and leave a little space in the tip and make sure you wear a condom that is snug, but not too tight. Store the condom in a cool, dry place (not in your wallet for prolonged periods of time)."

Having a condom break during sex can be really stressful. Fortunately, if you take action fast, you may be able to avoid dealing with some of the long-term ramifications of unprotected sex. And don't forget: If you do end up contracting an STD, many of them are treatable. That's why getting tested as soon as possible is a key part of minimizing any damage to your health that could result from exposure to sexual fluids.

More like this
Here’s The Best Sex Position For Your Venus Sign
By Rachel Shatto
22 Dua Lipa Lyrics About Love & Sex That Are Hotter Than Hell
By Corinne Sullivan
Making Love Vs. Having Sex: Here's How To Tell The Difference
By Anjali Sareen Nowakowski
Stay up to date