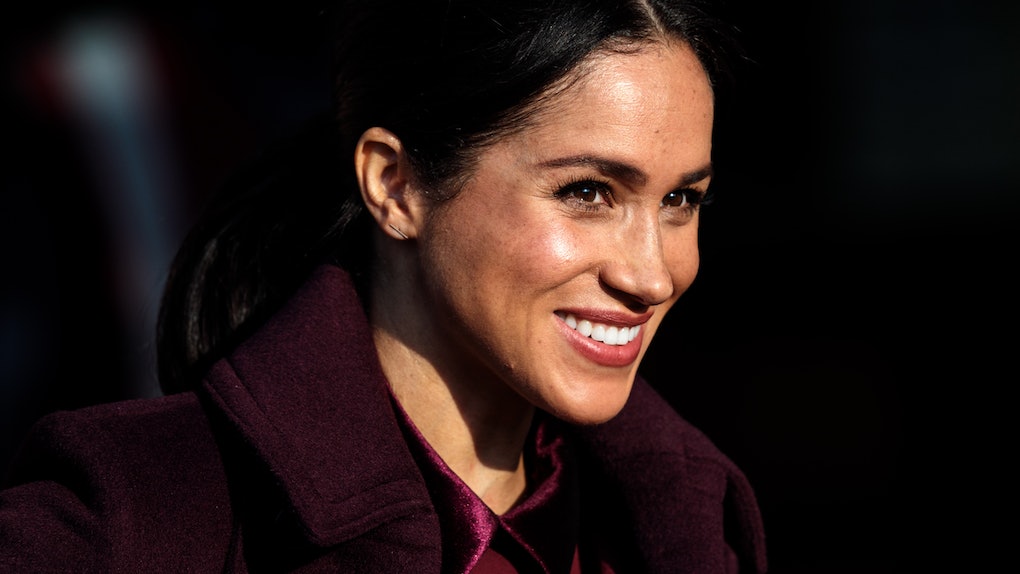 Here's The Reason Why Palace Policies Are Frustrating Meghan Markle, According To Reports

It’s no secret that Meghan Markle is going through some royal family growing pains right now. In recent days, there have been reports that the Duchess of Sussex is “difficult” to work with and possibly feuding with Kate Middleton (though, the Palace has been quick to shut those feud rumors down). There have also been some issues surrounding her dad Thomas Markle and his tendency to speak about his daughter publicly. But, apparently, none of that is distracting Meghan from her ultimate goal of making a difference in the world as part of the royal family. There are reportedly some frustrations for Meghan, however, especially where royal protocol is concerned. The reason why palace policies are frustrating Meghan Markle has everything to do with not having the freedom to be more independent.

In a new report from People, an insider source revealed that royal aides “might not be used to the ‘say-it-as-you-see-it’ American mentality” as Meghan appears to possess. Elite Daily reached out to Kensington Palace for comment on the report, but did not hear back by the time of publication.

So, what they’re really saying is that Meghan is causing the royals and everyone in their circle to experience a bit of culture shock. I’m sure Meghan is feeling very much the same!

In addition to revealing that those in the royal inner circle are not quite used to Meghan’s direct approach, the source also explained that Meghan is frustrated by royal protocol because it puts limits on what she can do.

“The palace is a magical place, and it is also a place where all you hear is 'no, no, no,'” the source told People. "The most difficult job in the royal family is to work with Meghan’s ambitions and make them realizable. She will get frustrated if she is told, 'You can’t do this or can’t do that.'”

Apparently, Meghan’s sister-in-law Kate Middleton doesn’t address her aides in the same fashion. Instead, she “has maneuvered herself in a different way, but she is still strong.”

The reports of Meghan’s royal frustrations come just a week after reports surfaced that her relationship with Prince Harry sparked some tension between him and Prince William. In a Dec. 11 report from Entertainment Tonight, a royal source revealed that "tension does still exist" between the brothers after Prince William expressed “concerns” about Meghan back in 2016. According to the source, Prince William and Prince Harry’s relationship has "not mended completely" and they’re still having trouble getting on the same page. Elite Daily reached out previously to Kensington Palace regarding this report, but did not hear back by the time of publication.

It seems that Prince William wasn’t the only one who expressed some misgivings about Prince Harry’s relationship with Meghan.

"Other members of the royal family also expressed their unease about their relationship," ET’s source revealed, "but Harry was steadfast and absolutely besotted with Meghan."

I guess Prince Harry truly lived up to his role as prince and saved the day! But even with all the reported tension surrounding the royal family, Harry and Meghan are moving on with their lives and moving out of Kensington Palace to have some peace of mind.

The royal couple will soon be heading to Frogmore Cottage at Windsor Castle for a little more privacy.

"The move to Windsor will allow them to raise their children away from the prying eyes of the paparazzi," ET’s royal source explained in the Dec. 11 report. "Naturally, Harry doesn't want to live in his brother's shadow for the rest of his life. Their lives are also moving in different directions as William prepares to be king one day."

So, it sounds like Harry and Meghan are doing what they can to move past some of these strange and uncomfortable issues. Good for them!