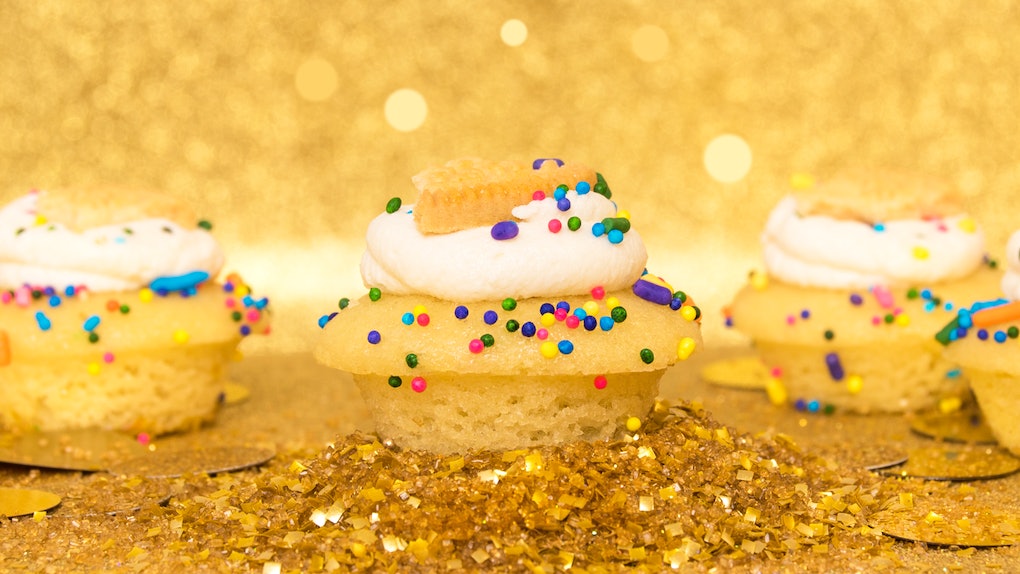 I've come to the semi-depressing realization that birthday celebrations were way more fun as a kid. Growing up, my birthdays revolved around party games, Slip 'N Slides, and most importantly, cake. At this point, I haven't had a birthday cake in way too many years to count, but lucky for adults aged 18 or older, Baked By Melissa, a bite-sized cupcake chain, is giving its older fans a chance to win 100 cupcakes on each of their birthdays for the next decade. So, since this is the opportunity of a freakin' lifetime, here's how to win free Baked By Melissa cupcakes for your next 10 birthdays. You're welcome.

Similar to Charlie and The Chocolate Factory's golden tickets, Baked By Melissa is hosting a delicious contest called "Find the Golden Cupcake." Starting on Tuesday, Sept. 12, sweet-toothed fans and cupcake lovers will get the chance to win 100 cupcakes on their birthday for the next 10 years, according to a press release. The cupcake shop will be wrapping each of its Latest & Greatest cupcakes assortments — a "fan-favorite assortment" with "25 handcrafted cupcakes in 12 mouthwatering flavors," per the website — with a special golden cupcake scratch-off Game Sleeve until Oct. 7. The contest applies to cupcakes sold in New York City stores and online.

If you want to participate without making a purchase, however, you can request a free Game Sleeve by sending a self-addressed, stamped envelope, to the company offices in North Bergen, New Jersey, according to the online rules.

Per the release, 10 people will have the chance to scratch off and win the grand prize. Furthermore, 1,000 people will be able to win an assortment of instant prizes, including 25 cupcakes or discounts off future purchases, according to Baked By Melissa. Also, in celebration of this glorious deal, each Mini of the Month Vanilla Cookies & Cream cupcakes in these winning packs will be filled with gold stuffing. All I can say is yum.

This contest honors Baked By Melissa's 10th year in business. The company now has an impressive 14 retail locations, as well as an e-commerce site with nationwide shipping, and let me tell you, that's definitely something to celebrate. In a press release, Melissa Ben-Ishay, the company's president, expressed that she's excited to celebrate these last 10 years and that she's looking forward to bring the joy of cupcakes to as many people as possible, making many birthdays a little more magical.

In the press release, Ben-Ishay said:

These last 10 years have been a magical journey, and I feel incredibly lucky to have created a company that makes people happy. I am excited to continue working with our hard-working, passionate team to bring the delicious joy of Baked by Melissa to as many people as we can around the country.

All birthdays are important, no matter your age, so here's to hoping those 100 cupcakes for the next 10 birthdays are yours. Whether you decide to celebrate with 100 people every year (or just eat them all by yourself) this is definitely worth looking into, and I'm personally in the process of buying my Latest & Greatest assortment. Oh, and if I win, you can bet your bottom I'll be dancing harder than Grandpa Joe.