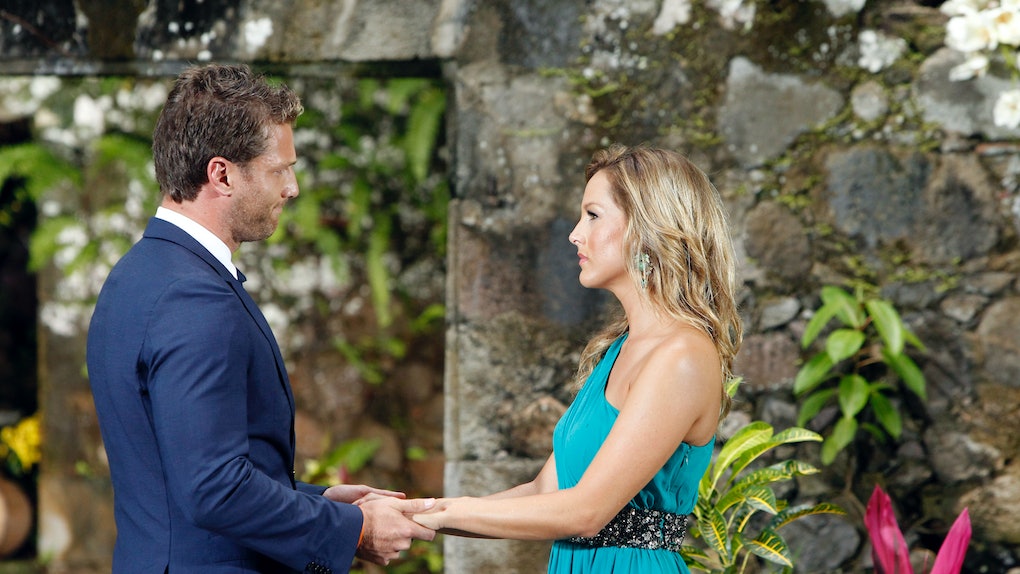 While it's been confirmed Clare Crawley's Bachelorette season has been placed on hold due to coronavirus concerns, fans are doing what they can to keep busy until the new season airs. And thankfully, there's a really good way to do so: by taking a look at the Bachelorette's past. If you want to get deep into the franchise's history while also brushing up on the present, you can watch Juan Pablo's season of The Bachelor to prep for Clare's (hopefully) happily-ever-after.

In case you forgot, Clare was the true winner of Season 18 after delivering one of the most applause-worthy speeches in all of television history to the show's lead at the time, Juan Pablo Galavis. After actually coming in second on the show and dealing with all kinds of drama leading up to the final rose ceremony, including being shamed for her sexual decisions and the helicopter ride from hell, Clare walked away stronger and Juan Pablo made history by becoming one of the most controversial Bachelors ever.

After everything she's been through, including two seasons of Bachelor in Paradise and a stint on Bachelor Winter Games, Clare is really hoping to find love as the franchise's upcoming lead. But before she gets her storybook ending, it looks like producers are planning on showing the painful start of her Bachelor journey by airing Juan Pablo's season all over again.

After Chris Harrison posted to Twitter asking Bachelor Nation which seasons they'd like to rewatch, producer Mike Fleiss announced later that evening after monitoring the comments that Juan Pablo and Clare's season would be at the top of the list.

It seems producers are still working on putting together the exact rewatch schedule, and if you can't wait for that to happen, you're in luck. Juan Pablo's season can already be streamed right now on Amazon, if you're willing to purchase it for $13.99.

Based on some recent interactions between the Bachelorette and the former Bachelor, it seems tensions are still running high all these years later. Whether rewatching the Clare's original reality show appearance will add fuel to that fire or finally calm things down between the two, viewers can only speculate.