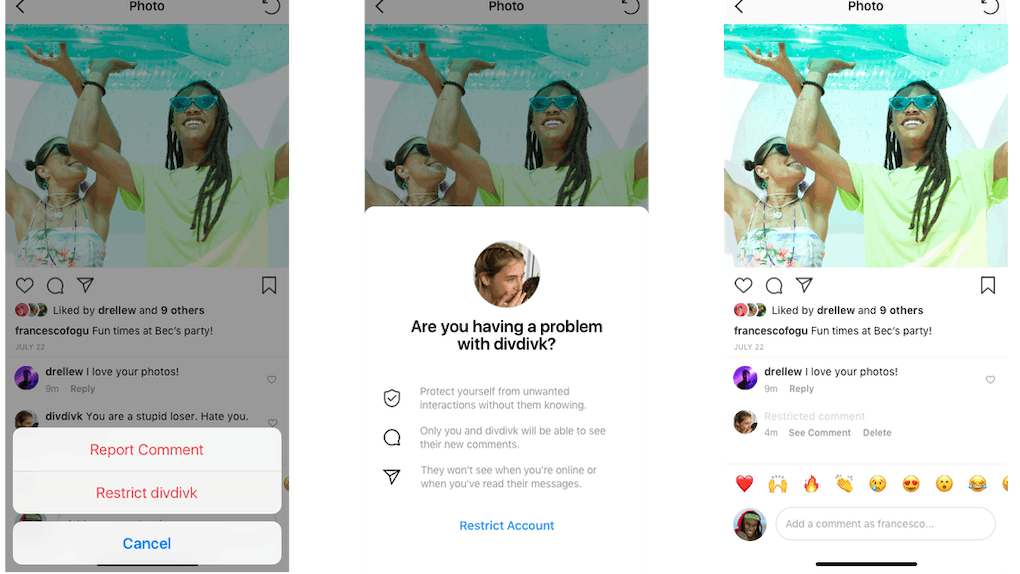 Here's How To Use Instagram's Restrict Feature To Filter Out Negativity

You may not know that October is National Bullying Prevention Month, but many take inspiration from the national event. It seems like it's kind of an epidemic, especially with social media, and that's why some social media platforms are trying to help make it better. Back in July, Instagram announced its Restrict feature — but the company only rolled it out as a test at first. Now, Restrict is available globally, as of Oct. 2. Interested? Here's how to use Instagram's Restrict feature so you can stop the negativity from spreading.

Since October is National Bullying Prevention Month, Instagram wanted to help by releasing its new Restrict feature across global user accounts. The month of October's dedication to bullying prevention was originally created by PACER's National Bullying Prevention Center in 2006, according to PACER's website. It's easy to join the movement, just by identifying your support and wearing the color orange on Oct. 23's Unity Day. Another great way to show support is to think about how you're addressing others online, in person, and in your daily life — plus, stand up for yourself in a small way, such as using Instagram's Restrict feature.

Instagram's official press release for the Restrict feature addresses bullying in a way that some may overlook. In the company's official statement, the app states: "We know that young people face a disproportionate amount of online bullying but are reluctant to report or block peers who bully them." Some might be afraid or intimidated to stand up for themselves. It isn't easy. But the good news with the update is that Instagram's Restrict "is designed to empower you to quietly protect your account while still keeping an eye on a bully."

What does that mean? It means that you and the person who left the restricted comment on your Instagram post are the only two people who can see it, and you get to approve (or not approve) other comments from that user in the future to make them visible to everyone. That means you can keep the situation from escalating, with other users getting involved one way or the other, as well as sort of moderate a user's comments to your posts.

Let's get into the details so you can start using Instagram's Restrict feature ASAP.

How to use Instagram's Restrict feature:

There are a few ways you can use Restrict to block an unwanted comment.

If you're looking directly at your post in the comments section, you can swipe left on the comment you want to restrict.

So, what happens after you use Restrict on a user? Well, no other user will be able to see comments from the Restrict user on your posts. Just you and the restricted user can view the comment. Then, you can "choose to view the comment by tapping 'See Comment;' approve the comment so everyone can see it; delete it; or ignore it," per the press release. You will also have more control over a restricted user's DMs to you. They will be listed as a Message Request instead and you will not be notified when they send you a message. If and when you decide to view a message from a restricted user, the user won't see that you've read the message.

Instagram is definitely taking the steps to help users feel more comfortable with their social media posts. Instagram's official release also shows the company is taking extra steps to support the anti-bullying moment. Apparently some posters designed by Instagram's team up with PACER's National Bullying Prevention Center, the Boys & Girls Clubs of America, and Brazilian community illustrator @leonatsume are going to be featured in schools and community centers for National Bullying Prevention Month.

And right now, you can totes start using the new "Create Don't Hate" sticker the company released to Instagram Stories.

I'm super proud of Instagram for stepping up to help combat bullying. Cyberbullying is a huge problem, and if no one does anything about, it'll just go on getting ignored. Of course, this won't put an end to all bullying, but it's better to do something rather than nothing, right? You can show your support by using the "Create Don't Hate" sticker on Stories, and if you need to, start taking advantage of Instagram's Restrict feature to help make your page a more positive place.