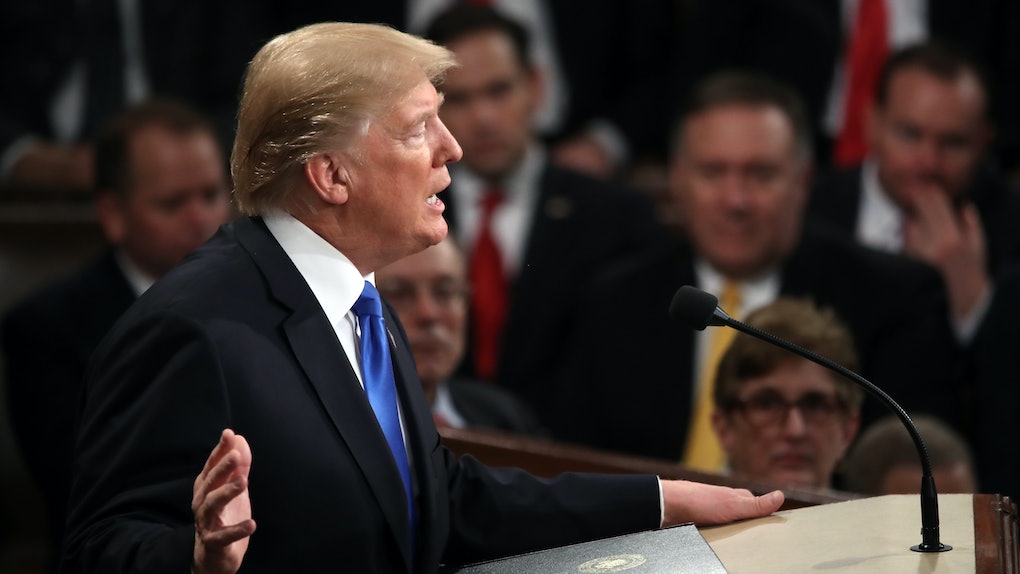 Are you ready for the State of the Union? On Jan. 29, the president will share his sense of how things are going in the country, likely touching on hot-button issues like immigration and health care. If you're hoping to watch the address, but don't have a cable subscription, here's how you can stream the 2019 State of the Union.

The address kicks off on Jan. 29 and will available to watch via the White House live stream and on C-SPAN's live stream. Other options include PBS Newshour, per radio station WITF, or you can watch it on Roku, if you have one. Click here for instructions on how to do it.

It's unclear if any other options will emerge in the days to come, but in 2018, the State of the Union was available to live stream on NBC and CBSN's YouTube channels, per The Daily Beast. It was also available on Twitter for people to view right from their phones. If those options aren't available to you, either, now might be the time to beg a friend to borrow their cable, because you really won't want to miss this year's address.

This year marks President Donald Trump's second State of the Union, and will seemingly be just as interesting as the first. As you probably already know, there's been a huge back-and-forth over border security, and it seems almost certain that Trump will use the spotlight to bring the issue up again. He wants $5 billion-plus for a border wall with Mexico, which Congress has refused, only offering him $1.3 billion for border fencing and barriers. Although the partial government shutdown that resulted from the stalemate has ended temporarily, the fight for border security is still on.

Congress has until Feb. 13 to come up with a deal on wall funding to avert a second shutdown. So far, negotiations are ongoing, but if an agreement isn't reached soon, things could get ugly. A Jan. 10 New York Times report said that Trump could try to use disaster aid to finance the wall, a move that would likely be strongly criticized, given that there are places such as Puerto Rico that could use that money. Elite Daily reached out to the White House and the U.S. Army Corps for further comment on the matter at the time, but did not hear back. And on Jan. 4, Trump said he was considering declaring a national emergency, which would allow him to pull funds from the Department of Defense and other sources instead of having to wait for funding from Congress. To Trump, this is a "humanitarian crisis" and he's taken every opportunity to let the public know that, painting a picture of violence and crime at the border. So his speech on Feb. 5 might not be any different.

Sounds like it's about to be as dramatic as the 2018 State of The Union. During that address, Trump took credit for job growth for African Americans (which started under President Obama). He also doubled down on immigration, while dozens of guests impacted by his immigration policies sat in the audience, including those in the Deferred Action for Childhood Arrivals (DACA) program (a program that protects some 700,000 immigrants who arrived in the U.S. as children from deportation), which Trump revoked. And then he hunkered down on health care, namely the "disastrous" Affordable Care Act (ACA), also known as Obamacare, as well as his plans to address gang violence. It was apparently such good material that even Trump couldn't stop clapping for himself, although there were some facial expressions in the room that said otherwise.

With that, you'd better get your channel set and have your popcorn on hand. Remember, the 2019 State of the Union is on Feb. 5, and if past events are any indication, it will be one for the books.