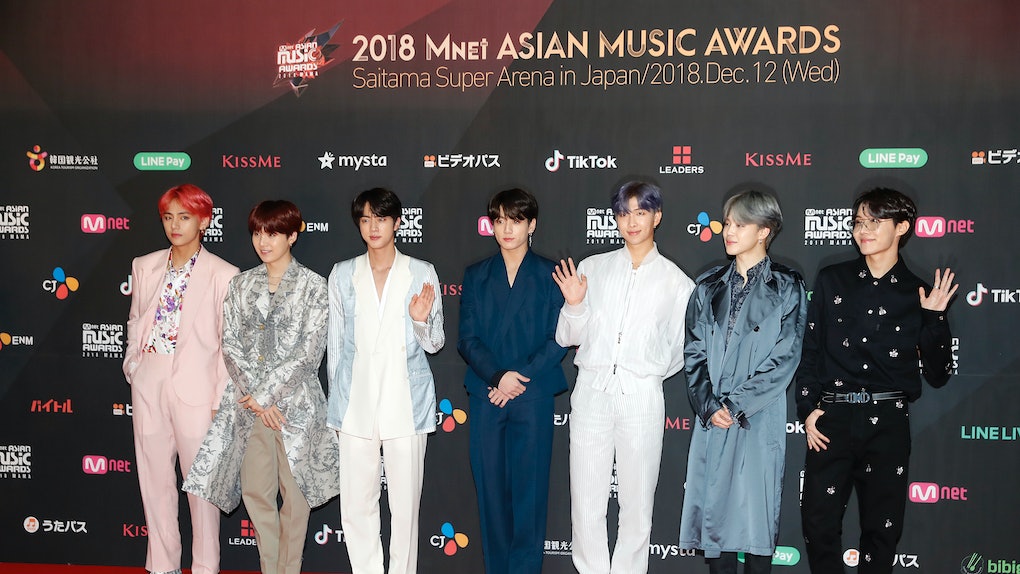 The BTS ARMY's adrenaline is still pumping from watching BTS' nearly 40-minute performance at the 2019 Melon Music Awards on Nov. 30. Besides performing fan-favorite hits, like "Intro: Persona," "Boy In Luv," and "Boy With Luv," the group showcased their individual talents through dramatic choreography, leading up to BTS' epic "Dionysus" finale. It's hard to imagine how BTS can top their 2019 MMAs performance, but fans think it will happen when BTS takes the stage at the 2019 Mnet Asian Music Awards. To make sure you don't miss any of the action, here's how to stream the 2019 MAMAs.

As fans know, the MAMAs are an end-of-year award show that honors the best Asian musical acts of the year. This year's ceremony will be different from previous ones because it's first time it'll take place at a dome. This year's ceremony will be held at Nagoya Dome in Japan on Dec. 4. Other than BTS, acts like GOT7, TWICE, TXT, and ATEEZ will also hit the stage, and a lineup like that would make any K-Pop fan want to watch the show.

And just because the MAMAs will take place in Japan doesn't mean fans around the world can't tune into the show. In fact, the MAMAs are having a global livestream on several different platforms to ensure as many fans as possible can watch both the ceremony and the red carpet in real time.

For those who prefer watching the red carpet on Twitter, all fans have to do is check @MnetMAMA for updates. Meanwhile, Facebook users can watch the carpet on the "Mnet M COUNTDOWN X M2" page, while those who prefer YouTube can tune into the "Mnet K-POP" YouTube channel. The official Mwave website is another option to stream red carpet.

While the red carpet will stream on four different platforms, the actual ceremony will only stream on two: YouTube and the Mwave website.

Make sure you bookmark the tweet above, ARMYs, because you don't want to miss BTS' epic MAMAs performance. On Dec. 2, BTS gave fans a few clues for what they can expect at this year's MAMAs.

Even if you don't know what their clues mean (#130911 as coordinates?), one thing the BTS ARMY can always expect is the unexpected.

More like this
Here's How To Stream Prince Philip's Funeral So You Don't Miss The Celebration Of His Life
By Brandy Robidoux
Here's Why Meghan Markle Reportedly Isn't Attending Prince Philip's Funeral
By Cianna Garrison
Will BTS' McDonald's Meal Include Photocards? Here's What ARMYs Should Know
By Michele Mendez
Stay up to date