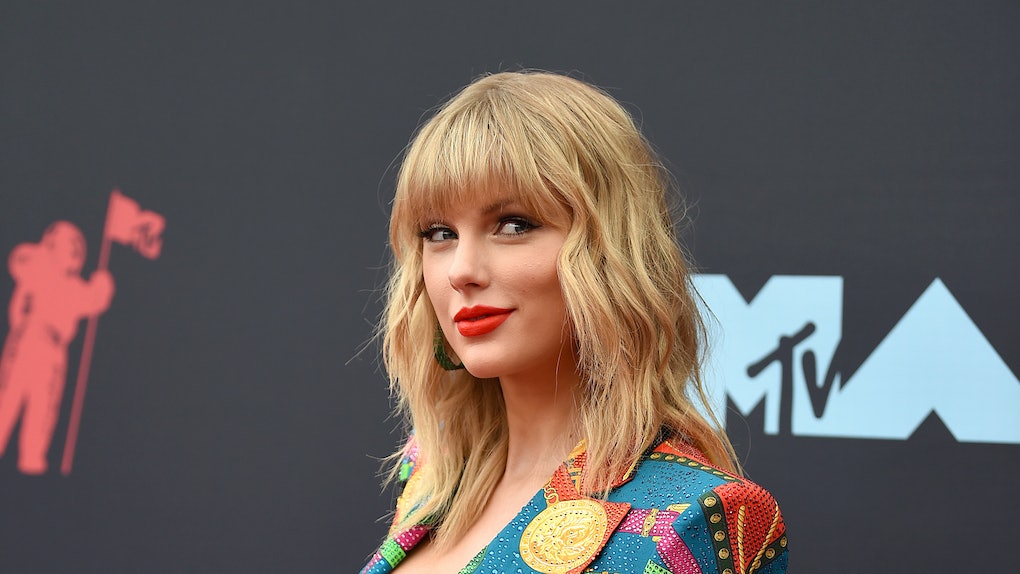 Taylor Swift made clear her stance on gay rights even more clear during the MTV Video Music Awards on Monday, Aug. 26. And she's here to remind you to sign her petition in support of the Equality Act, in case you haven't already. The "Lover" singer took home the moon man for Video of the Year at the 2019 VMAs for the "You Need To Calm Down" music video, beating out Ariana Grande's "Thank U, Next," which I, personally, thought was a shoo-in, But Swift's gay rights anthem — her first political song ever — took home the prize, so here's how to sign Taylor Swift's petition supporting the Equality Act that's featured at the end of the "YNTCD" music video.

The petition is featured at the end of Swift's "You Need To Calm Down" music video, which she dropped on June 13, the day before Donald Trump's birthday — a move fans have chosen to believe was intentionally shady. The video is gay as hell, featuring a massive cast of queer celebrities and allies, like the cast of Netflix's Queer Eye, Ellen DeGeneres, Billy Porter, Todrick Hall, RuPaul, drag queens dressed as pop stars, and more. It was released during Pride month, making it even more queer. After she and Katy Perry appeared at the end of the video in burger and fries costumes (yes, that happened), a message appeared across the screen.

Let's show our pride by demanding that, on a national level, our laws truly treat all of our citizens equally. Please sign my petition for Senate support of the Equality Act on Change.org.

The Equality Act basically is a law protecting the LGBTQ community from discrimination in the workplace, housing, and healthcare. If you think that's something you can get behind (it's basic human rights...), you can head on over to Change.org and sign Swift's petition by providing your first and last name, and email in the top right-hand corner of the page. You can see signatures trickle in as more people sign it. It's currently at over 500,000 signatures, but Swift wants to get it to 1 million, according to the Change.org page.

Swift urged fans to sign the petition during her MT VMAs Video of the Year acceptance speech on Aug. 26.

"I just want to say that this is a fan-voted award, so I first want to say thank you to the fans, because in this video several points were made, so you voting for this video means that you want a world, where we're all treated equally under the law, regardless of who we love, regardless of how we identify," Swift said. Then, she took a dig at Donald Trump and the White House.

And the end of this video, there was a petition, and there still is a petition, for the Equality Act, which basically just says we all deserve equal rights under the law. I want to thank everyone who signed that petition, because it now has half a million signatures, which is five times the amount that it would need to warrant a response from the White House.

Anyway, at the end of Swift's speech, she pretended to look at her invisible watch, indicating that she's going to keep on waiting to hear from 1600 Pennsylvania Ave.

She wrapped up her speech by thanking her cast and crew of the video.

"I love my cast. I am so grateful to everyone who was in this video. The ones who are here, the ones who are at home, we love you so much," she said. "Thank you for doing this with us. I love my co-executive producer, Todrick Hall. I'm so thankful to my co-director, Drew Kirsch. Thank you so much. And thank you to the fans for everything you do for us. My cast live their lives so authentically. Thank you for being the example that you are. I love you guys so much. Thank you, MTV, for lifting up this point in this video. We love you."

"You Need To Calm Down" marks Swift's first-ever public political statement, and clearly her fans are supportive of it. Now let's get them signatures!

More like this
TikTok’s Taylor Swift Era Trend Documents Your Throwback Swiftie Evolution
By Rachel Chapman
Here's How To Get Taylor Swift's "Fifteen" Snapchat Lens For A 'Fearless' Preview
By Cianna Garrison
Taylor Swift's 'Fearless (Taylor's Version)' Lyric Changes Are Small, But Meaningful
By Michele Mendez
Stay up to date