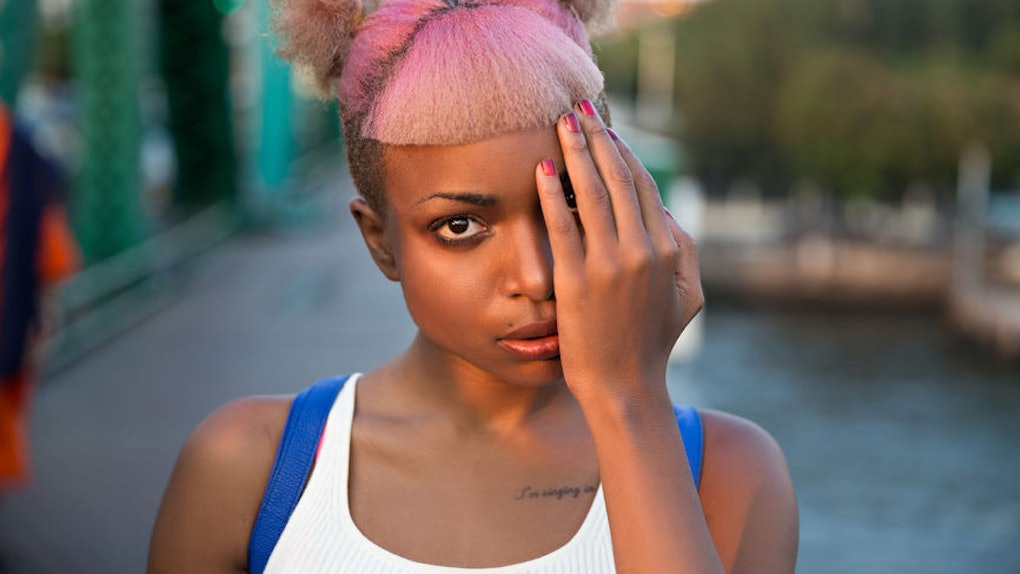 Here's How To Really Forgive & Forget To Make Room For More Positivity In Life, According To Science

When Lauren Conrad looked Heidi Montag straight in the eye and said “I want to forgive you, and then I want to forget you” on a tension-filled episode of The Hills, that was the linear definition of a mood if I’ve ever seen one. I remember watching the scene unfold, thinking about how Los Angeles had probably never been so cold than it was in that very moment, and admiring Conrad for doing, at least to me, the unthinkable. To this day, I’ve never been able to figure out how to really forgive and forget, and wipe my life clean of a specific person or memory. I can’t imagine it’s an easy skill to master, but according to new research, it's definitely possible, so at least there’s that shred of comfort.

The ironic thing about forgiving and forgetting is that actively trying not to remember someone or something, actually takes more effort than remembering does. At least, that’s the story that researchers from the University of Texas at Austin are rolling with as a result of their most recent study, which explored how to intentionally forget certain memories.

According to UT Austin’s official press release on the study, researchers were looking to demonstrate that humans are capable of making themselves forget a memory beyond the natural elimination process that happens in the brain over time. They found that consciously forgetting requires “moderate levels” of brain activity, compared to moments when you’re trying to put two and two together until the lightbulb goes off. Fascinating, right?

For their experiment, researchers recruited a group of healthy young adults who were individually shown of a series of images, and for each picture, the participants were instructed to either remember or forget what they were seeing. Per UT Austin’s press release, the researchers used neuroimaging in order to keep track of participants’ brain activity throughout the study, and according to the results published in the Journal of Neuroscience, there’s a fine line between how much brain power is necessary to strengthen or forget a memory.

More specifically, according to lead author of the study, Tracy Wang, a “moderate level of brain activity is critical to this forgetting mechanism.” In other words, if you put too much effort into forgetting a memory, you’ll likely end up painting a clearer picture of the scenario in your head. But if you make too little of an effort to wipe your memory clean, the memory will likely stay put, according to Wang and her team's findings.

“It’s the intention to forget that increases the activation of the memory,” Wang explained. “When this activation hits the ‘moderate level’ sweet spot, that’s when it leads to later forgetting of that experience.”

So what does this all mean in terms of forgiving and forgetting a person? Well, it’s important to note that while, clearly, intentionally forgetting is a skill you can learn and use at will, the researchers in this study did point out that their participants had an easier time forgetting images of scenes than they did images of human faces. But don’t let that discourage you from trying, friends. If Lauren Conrad can forget Heidi Montag and Spencer Pratt, then you can certainly say buh-bye to toxic people in your life once and for all, too.

That being said, memories do have a tendency to kind of sneak up on you from time to time, which brings up an important question that this particular study hasn't answered: Are humans able to forgive and permanently forget? Michael Alcee, Ph.D., a clinical psychologist based in Tarrytown, New York (who was not involved in the study), is skeptical.

“Although it can be possible with a certain degree of processing or psychotherapy to take down the intensity and volume of certain memories, there is also some research to suggest that memories sometimes and often autonomously spring up,” Alcee tells Elite Daily over email. When memories come up out of the blue, he explains, scientists have actually linked this to a protein structure in the brain called prions, which are apparently responsible for the “seemingly random and whimsical nature of memory," he says.

Translation: Science may say that it’s possible to intentionally forget, but it also has a hunch that memories always stick around in some capacity.

As for whether or not forgiving and forgetting is healthy for you, the jury’s still out. On one hand, Alcee points out, to a certain degree, memories are what make you who you are. In a sense, they’re kind of like the history books of your brain — great to reference when you don’t want history to repeat itself. However, Alcee adds, this is circumstantial, depending on what sort of memory you’re looking to erase (i.e. something traumatic that haunts you, or a messy breakup you’re still hung up on, etc.).

According to Laura Weldy, an ICF-credentialed life coach, the bottom line is, no matter what memory or person you’re looking to move on from, it’s healthy to be able to recognize when something doesn’t serve you in a positive way.

“Forgive and forget if that feels right, evaluate and plan for new growth, or separate memories that don’t make you feel good from your view of yourself as a person,” she tells Elite Daily. “Whatever technique allows you to be present and make new happy memories is a good one.”

More like this
Can I Exercise After A Flu Shot? Experts Recommend Listening To Your Body Post Vaccine
By Georgina Berbari
HomeGoods' Hideout Contest Treats You To A Relaxing Solo Getaway & Free Merch
By Marisa Casciano
Your Favorite Way To Escape From Reality, As Told By Your Moon Sign
By Roya Backlund
Stay up to date