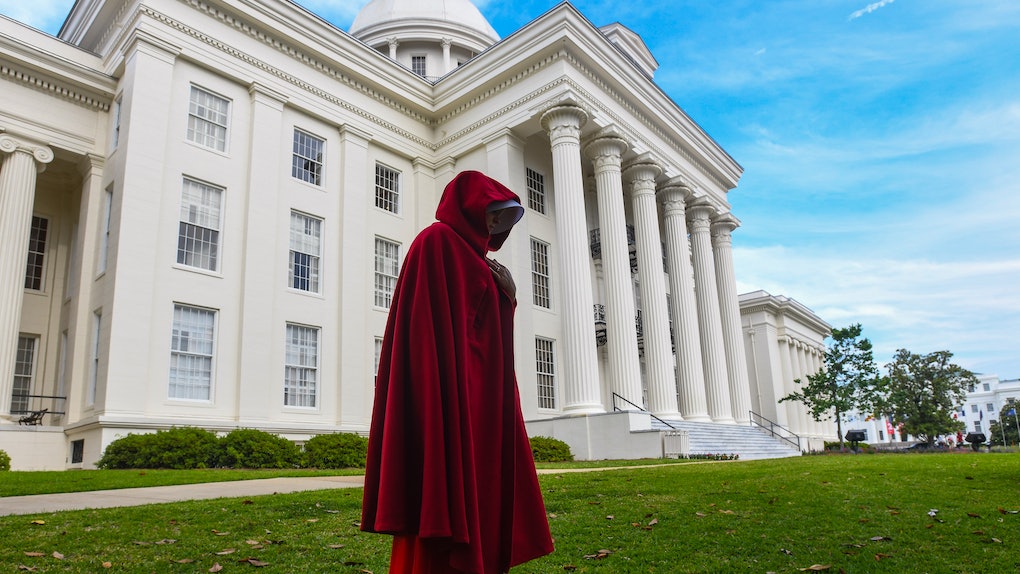 Over the past few weeks, restrictive anti-abortion measures have been popping up in states across the country. The recent sweep of fetal heartbeat and near-total abortion bans have led many people to stand up and speak out in defense of protecting reproductive rights for citizens. For those who want to get involved, here's how to protest abortion bans around the country, because it's never been so urgent.

In recent weeks, a number of high-profile anti-abortion laws have passed in states around the country, bringing reproductive rights to the forefront of the national conversation. On May 7, Georgia's Gov. Brian Kemp signed a fetal heartbeat bill that would ban abortions after a heartbeat is detected — usually at around six weeks, which is before many people may know they're pregnant. Then on May 14, Alabama Gov. Kay Ivey signed the Human Life Protection Act, which will ban abortions in almost all cases, including pregnancies caused by rape or incest, with the only exception being for the health of the pregnant person. In addition, physicians who conduct or attempt to conduct the procedure could face up to 99 years in prison. A day later, on May 15, Missouri's legislature voted to pass a similar measure called the Missouri Stands for the Unborn Act. This bill would ban abortions after eight weeks of pregnancy, and the procedure would only be allowed in cases where the person's life was in danger. However, abortions would still be banned even for pregnancies caused by rape or incest. The Missouri Stands for the Unborn Act also includes a "trigger" law, which would outlaw all abortions if Roe v. Wade, the Supreme Court decision legalizing abortion in the United States, is overturned.

These extreme anti-abortion measures have received backlash from reproductive rights activists and concerned citizens across the country. And they're doing something about it. On May 21, advocates are taking part in a "Stop The Bans" day of action, including protests around the country. Don't see your city listed below? Don't worry. You can check out the action's website and find a protest local to you. And if there isn't one? You can always make your own, after all.

On Tuesday, May 21, organizations including Planned Parenthood, NARAL Pro-Choice America, the American Civil Liberties Union (ACLU), Women's March, and others are teaming up to prepare for the National Day of Action to Stop the Bans. The rally will take place in Washington D.C. in front of the Supreme Court building to protest against the slew of anti-abortion measures emerging around the country. The rally starts at noon local time with featured guests including members of Congress, NARAL President Ilyse Hogue, and Planned Parenthood President Dr. Leana Wen, according to a press release sent to Elite Daily.

As a part of the National Day of Action to Stop the Bans event, other cities will be holding sister rallies in solidarity of this fight. According to the press release, St. Louis, Missouri, will be holding its own rally on May 21 at noon local time in Luther Ely Smith Square Park. Missouri is one of the states that has passed one of the most extreme and restrictive abortion measures in the country, and activists will be speaking up to rally against Missouri Gov. Mike Parson to demand that he veto the bill.

Want to learn more about this rally? Head to the Facebook event page to get the full scoop.

On May 21 at noon local time, Georgia residents will have the opportunity to fight against Georgia Gov. Brian Kemp signing HB 481, also known as the Living Infants Fairness and Equality (LIFE) Act. The #StopTheBans rally will take place at Georgia State Capitol in Atlanta, Georgia, and is hosted by the Georgia Alliance for Social Justice, Indivisible Georgia Coalition, and NARAL Pro-Choice Georgia. According to the Facebook event, the speakers for the event haven't yet been announced. However, judging by the amount of attention HB 481 is receiving, it could be quite the event.

Learn more about the rally by checking out the #StopTheBans Facebook event.

On May 21, Planned Parenthood Minnesota Advocate is gathering residents at the Minnesota State Capitol at 12 p.m. local time to rally for safe and legal abortion. Minnesota has considered introducing anti-abortion measures, including a fetal heartbeat bill, which would prohibit abortions at six weeks and after. While nothing has passed in the state yet, the ongoing threat to reproductive rights in Minnesota has spurred activists to stand up and speak out.

No matter where you live, there's always an opportunity to speak out. On Tuesday, May 21, at 5:30 p.m. local time, New Yorkers in every borough and neighborhood can meet at Manhattan's Foley Square to stand in solidarity protest against the restrictive abortion measures happening throughout the country. This rally, called the Rally for our Health Care event, is hosted by New York's chapter of Planned Parenthood to spotlight how these measures can disproportionately impact low-income individuals and communities of color.

New York Gov. Andrew Cuomo signed the Reproductive Health Act in January, which guarantees New Yorkers will have access to abortions even if Roe v. Wade is overturned, but that doesn't mean the fight is over.

For Californians looking to fight for a cause, NARAL Pro-Choice California and the Los Angeles Action Council is urging activists and residents to gather at the Wilshire Blvd Overpass over the 110 Highway as an act of protest. The event is titled as an "emergency demonstration" to fight against these abortion bans. The rally starts at 5 p.m. local time and attendees are encouraged to bring signs, posters, and banners to decorate the overpass.

On May 21, those based in Washington state (or close to Olympia), can raise their voices at noon local time on the Washington State Capitol Building Steps as a part of the #StopTheBans rally. Hosted by Planned Parenthood Votes Northwest & Hawaii, the event will feature Washington Gov. Jay Inslee and other activists to fight against Alabama, Georgia, Missouri, and other abortion bans across the country.

Whether you live in these areas or not, the opportunity to speak out is never limited to a zip code. If you can't make it to a protest, you can still call your local and national representatives to weigh in, learn more about the issue, and do what you can.