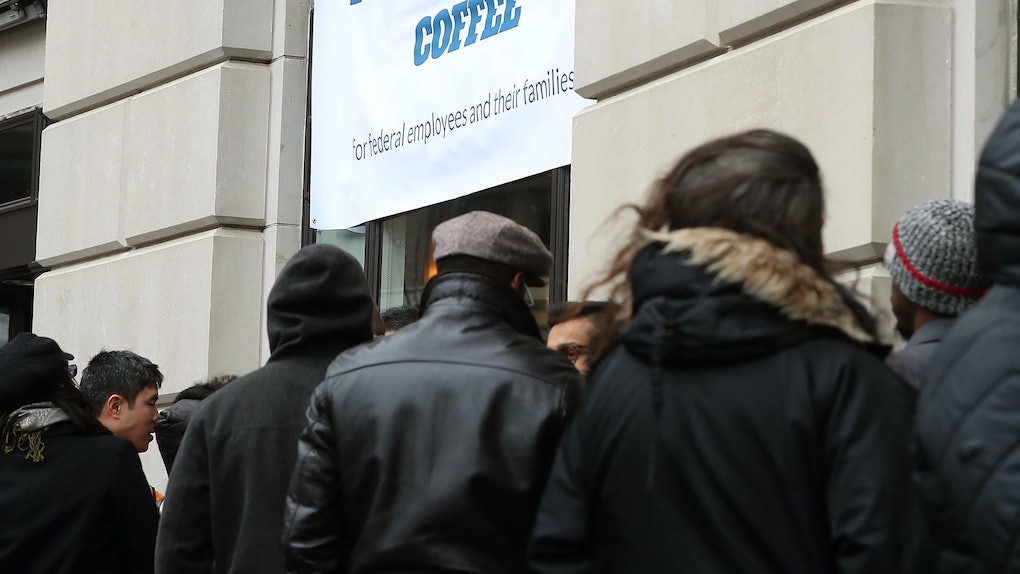 If you're keeping track, it's been over a month since the government went fishing on Dec. 22 over $5 billion in funding for President Donald Trump's border security proposal — which includes a border wall between the U.S. and Mexico. With the government still amidst a partial shutdown as of Jan. 24, there are nearly 800,000 federal employees who have gone without a paycheck since December. If you're wondering is there's a way to lend a hand while they go unpaid, here's a few ways to help those federal employees impacted by the shutdown.

While eyes are peeled as to whether Trump and the Democrats can reach some sort of compromise and end the shutdown, there are 380,000 federal employees that have been furloughed as a result of the government closure, while another 420,000 have been working without pay. And that lack of a paycheck can be a big problem: according to a study done by the Journal of Public Economics using examples from a 2013 government shutdown, many federal employees live paycheck-to-paycheck and during the shutdown will likely miss vital credit and rent payments just to be able to have cash on hand. There are some federal employees who are even at risk of losing their homes due to the lack of funding in the Department of Housing and Urban Development, according to NPR.

On average, many of those federal employees make yearly salaries that lag behind those in the private sector by about 32 percent, according to The Washington Post, with some government workers living without pay during the shutdown making under $50,000 a year. For example, members of the Coast Guard make around $20,000 a year and Transportation Security Administration (TSA) agents, many of whom are deemed "essential" and are working without pay during the shutdown, make a median annual salary of about $40,000.

So, in short, a month without pay is going to hit some people hard. Federal employees are facing some major financial hardships during the shutdown, but there are ways you can help out.

You can contribute to the GoFundMe for federal workers.

One of the easiest ways to help is by donating some money. GoFundMe has actually partnered with Deepak Chopra, an author and well-known figure in the New Age movement, to create a Government Shutdown Direct Relief Fund. According to the page, donations will be distributed to nonprofits across the country that are "offering direct assistance to government workers," including food supplies, supplies for children and babies, and others. GoFundMe CEO Rob Solomon said in a statement on the fundraiser page, "Government workers, through no fault of their own, can’t afford to put diapers on their newborns. Employees of the most powerful nation in the world are being forced to work without pay and line up at diaper or food banks. It makes no sense."

In order to help, you can donate directly to the GoFundMe campaign here.

Donate directly to the United for U.S. Fund.

If you'd like to donate to a specific organization directly, there are a few helping in relief efforts. United Way, a nonprofit organization focused on helping communities through local partnerships, has started a United for U.S. Fund as a joint effort with labor unions, nonprofits and other partners to help federal workers and contractors by providing emergency help with rent, food, and other basic necessities for government workers. You can make a cash donation by visiting their website.

Chef José Andrés and his nonprofit World Central Kitchen — which consists of chefs coming together to fight hunger worldwide — have set up #ChefsForFeds to provide free meals to government employees through a kitchen and cafe in Washington, D.C., as well as assistance through food trucks and restaurants nationwide. They are accepting money to help them purchase ingredients, and you can make a donation through the World Central Kitchen website.

If you are looking for a more hands-on way to help and you're in the Washington, D.C. area, you can actually apply to help in the kitchen and cafe. They are open daily from 11 a.m. ET to 6 p.m. ET and you can sign up to volunteer by filling out a form. At the moment they have an overwhelming number of volunteers so there is a waitlist, but they do provide a signup sheet that's constantly being updated to let you know if they and which spots they have open. Not local to D.C.? The program is expanding to other areas.

If you're not in D.C., Masbia, a soup kitchen network assisting government workers, is accepting volunteers in New York City. To sign up, just go to their site and list the areas of service you'd be interested in.

If you don't have extra cash on hand or time in your schedule to volunteer, there's another really simple way you can help: call your representatives and senators and let them know that you would like them to work towards ending the shutdown.

At the end of the day, it's your elected officials who have the power to work towards reopening the government, but you can have a voice through them. If you don't know who your representative or senator is, don't worry you can look it up on the House or Senate websites, respectively. Once you've got the names down, you can find their contact information in the House and Senate directories.

I know calling your reps can be pretty daunting, so don't feel bad if you're worried about what to say when you call. All you need to do is say your name, your district (which you'll see when looking up your reps), and that you're concerned about the shutdown and would like your representative/ senator to work towards ending it.

Let me help you out a little, here's a template based on what I've used to make it easier.

Hello, my name is your name here. I am a constituent from your state or congressional district, and I'm concerned about the partial government shutdown and all the federal employees who have gone without pay. I urge my representative/senator to work towards a fix. Thank you, and have a nice day!

Easy as making a phone call.

At the end of the day, there are a lot of methods to pitch in and help out. You can find a way to help that works for you, because there are a lot of folks who provide us with essential services on a day-to-day basis who aren't getting paid.