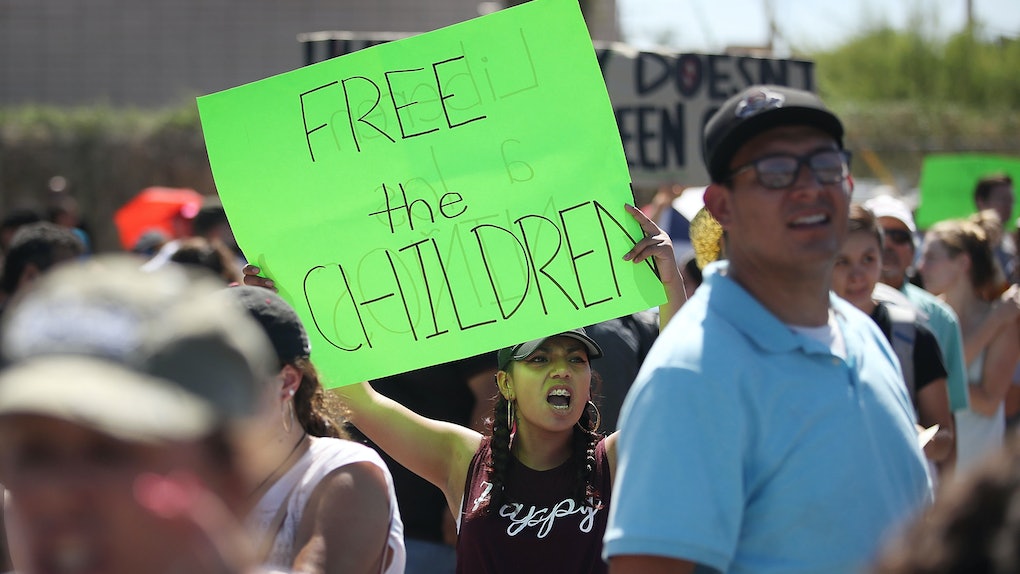 Here's How To Help Families Being Separated At The Border

In April, the Department of Justice announced a new "zero tolerance" policy on immigration, one that has since seen the government pursue prosecution of every adult illegally crossing the country's southern boarder. Those prosecutions have led to thousands of children being separated from their parents and held in government facilities — many without the knowledge of each other's whereabouts — while the parents' status is adjudicated. The stories of those children, and the images of the conditions of the facilities where they're being held, have inspired people to figure out how to help families being separated at the border.

It's clear why, too.

The reports about of individual cases of family seperation at the border only seem to be getting worse. On Wednesday, June 20, Mexico's foreign minister said that a 10-year-old girl with down syndrome was among the thousands of children who have been separated from their families.

In response to that particular case, one of President Donald Trump's most notable allies, former campaign head Corey Lewandowski, resorted to mockery.

A day before, Texas Rep. Joaquin Castro tweeted about his experience visiting minors who have been detained along the border, saying, "The youngest child (boy) I’ve seen here so far who was separated from his family is 8 months old and has been here over a month, according to administrators."

There are ways to respond to these stories, though. Below are five of them.

The mass increase of family seperation at the border is, to be clear, the result of a new policy from the Trump administration. Still, Congress is a co-equal branch of government that has the ability to impose its authority to counteract that policy.

There is already a growing sense of bipartisanship in merely disagreeing with the president on this issue. All five of New Jersey's House Republicans have said they oppose the Trump administration's zero tolerance policy, for example.

There is not yet, however, a sense of bipartisanship in creating a solution. There is precedent when it comes to Congress members responding to public angst, too. Most notably during the GOP's efforts to repeal the Affordable Care Act. A movement to push Congress towards narrow action against family seperation — and not the broad immigration bill that the White House has demanded — is one way to help the families.

Donate To The ACLU & Other Legal Funds

The American Civil Liberties Union (ALCU) is one of a number of organizations that is mounting a legal challenge against separations of families at the border, much like it did when the Trump administration first initiated a travel ban against six middle eastern countries.

Another organization, Kids in Need of Defense (KIND), seeks to provide legal protection for unaccompanied minors.

In general, there is a long list of organizations that intend to defend the families that have been subject to the worse results of the Trump administration's zero tolerance policy.

On Monday night, Washington Rep. Pramila Jayapal announced that the Families Belong Together movement will be holding a national protest on June 30, with the main demonstration being held in Washington D.C.

Sister marches will be held in other major cities, much like the March For Our Lives and the Women's March. The protests won't only provide an opportunity for a mass demonstration against immigration policies, it is an opportunity to meet with others who are looking to mobilize against those policies beyond the day of the march.

An election year isn't only an opportunity to vote for a Democrat against a Republican, or vice-versa. Primaries provide the opportunity to decide which types of Republicans and Democrats are elected to office.

In 2014, former Virginia Rep. Eric Cantor lost a Republican primary just as it looked as if he would be a leading figure in a bipartisan attempt to enact immigration reform. The reform never happened.

The lesson, primaries and midterms can make or break major policy initiatives. Throughout the summer, primaries will be held in states like Utah in Tennessee, ahead of the November general elections.

Electing leaders committed to a change in immigration policies, on either side of the aisle, could prove effective.

There are organizations in border states that are seeking volunteers to help serve migrant families. The American Immigration Lawyers Association is one example, as it searches for volunteers who can provide legal representation for those seeking asylum.

Organizations like the the Texas Civil Rights Project is searching for volunteers who can attorneys in their work.