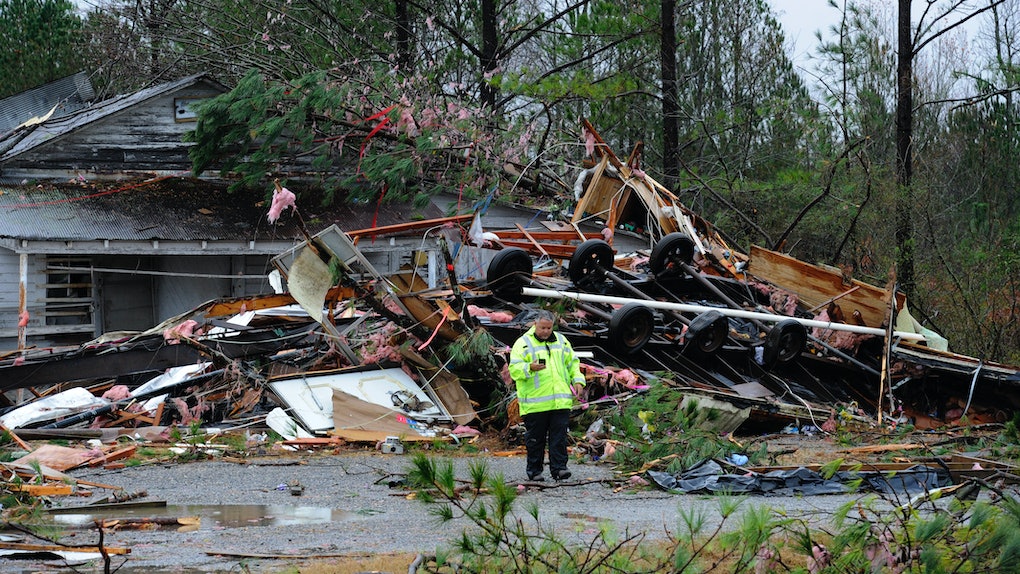 Here's How To Help After The Tornadoes In Alabama, Because This Is Awful

On Sunday, March 3, the Southeast United States experienced a terrible tragedy. At just around 1 p.m. local time, a tornado warning sounded off in Alabama, per The New York Times, the precursor to a series of devastating tornadoes that destroyed homes and left many dead. This ordeal has impacted many people's lives, so here's how to help after the tornadoes in Alabama. Anything helps.

The tornadoes hit Alabama, Georgia, and Florida, tearing downhomes and killing at least 23 people, with all the deaths reported in Lee County, Alabama, per the Times. So far, it's reportedly unclear whether any fatalities have happened in Georgia or Florida. Even though these tornados stretched into other states, Alabama experienced the worst of it with two tornadoes, one at least a half-mile wide according to the Times, hitting back to back, destroying homes and uprooting whole trees. This marks the deadliest incident of tornadoes in Alabama since 2011, according to CNN.

Following the tornadoes, states have assembled search teams to look for survivors and displaced residents. Lee County Sheriff Jay Jones told reporters for the Times that the East Alabama Medical Center in Opelika, Alabama received more than 60 patients on Sunday, March 3, but there may be more people in need who haven't been found. On March 4, President Donald Trump took to Twitter to state that he has directed the Federal Emergency Management Agency (FEMA) to give "A Plus treatment" to Alabama. (A previous version of the tweet was deleted for using the wrong handle for Alabama Gov. Kay Ivey.) He wrote,

FEMA has been told directly by me to give the A Plus treatment to the Great State of Alabama and the wonderful people who have been so devastated by the Tornadoes. @GovernorKayIvey, one of the best in our Country, has been so informed. She is working closely with FEMA (and me!).

While many of those affected may be receiving aid, there's still a lot more we can do to help. So, for those looking to lend a helping hand, here's a few ways to pitch in.

Volunteer As Part Of The Search Teams In Alabama

If you're in the area, you can do some good on the ground. Since the storms hit on March 3, Alabama has rallied volunteers to search for missing victims and surviving residents who might need aid in numerous counties. The tornadoes left a catastrophic amount of debris and devastated land, so local residents have been using their own tools, flashlights, and car lights to search through the rubble. These teams have been helping since Sunday, March 3, but the search and rescue efforts are continuing. So, if you're a local resident who wants to help, contact your county's sheriff's office to see if you can contribute.

These tornadoes have impacted residents' lives forever. Opelika Fire Department Chief Byron Prather told television news station WSFA 12 that several homes had been destroyed in Lee County, Alabama. In order to help these individuals and families get back on their feet, you can always gather up some non-perishable foods and household items to donate to residents who have lost everything. Currently, Red Cross of East Alabama is accepting donations as well as The Auburn Dream Center in Auburn, Alabama, per WHNT19 News. Items such as granola bars, diapers, bottled water, baby formula, and hygiene products are encouraged. Any contribution helps.

It's also perhaps worth noting that after natural disasters, many organizations recommend donating money over goods, as a gift of cash doesn't need to be sorted, stored, or matched with people who need it. What's more, money can help by re-stimulating a local economy, as it means goods can be bought from local businesses which have also been hit by the disaster. You can share the wealth with donations to the Red Cross of East Alabama, or the Governor's Emergency Relief Fund to help victims of tornadoes or flooding.

The Alabama hurricanes have not only affected human residents, but also animals in that area. Currently, the Opelika Animal Hospital in Opelika, Alabama is accepting displaced animals and offering boarding services for no-charge, according to a post on their Facebook page and WHNT19 News. So, if you're in the area and see an animal that looks like it needs help, gather them up (as carefully as possible — don't put yourself at risk) and take them to the closest animal shelter so that they can receive the care they need, and hopefully be reunited with their family.

According to their Facebook page, The East Alabama Medical Center in Opelika is looking for people to donate blood through their LifeSouth location. So far, surrounding hospitals have received a huge increase in patients due to the tornadoes, and therefore are looking for people to donate blood as a way to help. So, head over to your closest hospital, or LifeSouth location, as a way to help. If you're not local, you can still help: the Red Cross accepts blood donations nationally, and you can find a local blood drive as easily as entering your zip code. Even if it wont make it to help immediately, your donation could be used later to help survivors.

Unfortunately, there's no telling how many more survivors or victims will be found in the days to come. In the meantime, there's numerous ways to help the people recovering from this natural disaster.