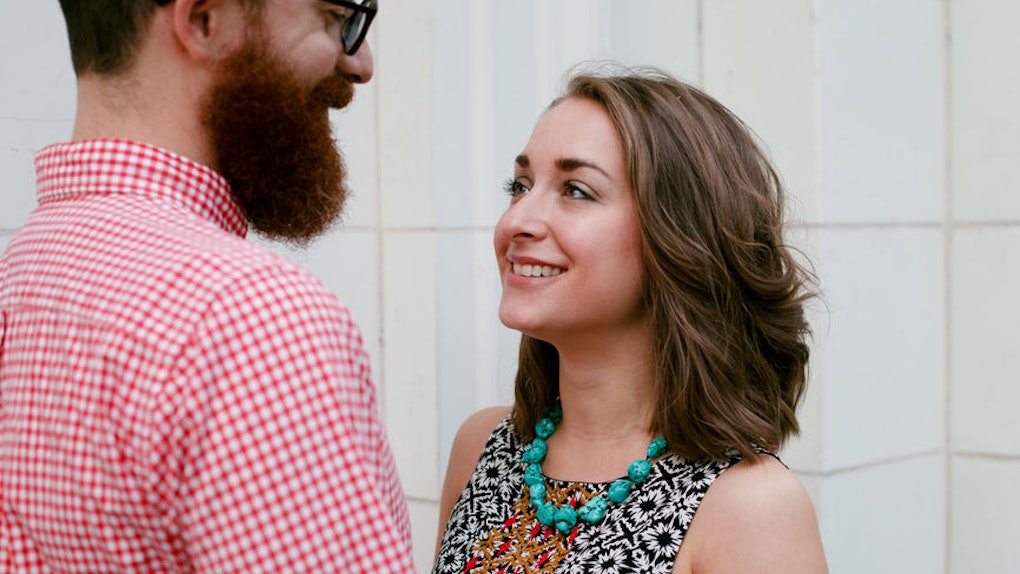 Here's How To Get The Truth Out Of Someone Using A Simple, Science Backed Trick

How can you detect a lie before it’s told? It’s not as challenging as you might assume. Sure, some liars are so skilled that you won’t even see them squirm when they spin their web of stories, but they say eyes are the window to the soul for a reason, right? If you look deep enough into the eyes of your deceiver, you might just be able to tell what’s real from what’s not. According to new research, direct eye contact might even be the only way to get the truth out of someone who has dozens of lies lined up in their head. So, not only can you make the falsities stop while you’re ahead, once your eyes meet theirs, they’ll have no other option but to tell the truth. Now that’s what I call power.

This new research is pretty groundbreaking because, while it’s pretty much common knowledge that you can tell someone’s lying by the way they look — or don’t look — at you, this study suggests that direct eye contact encourages truth-telling. If that’s the case, then you could just skip the awkwardness of having to call someone out on a lie because — spoiler — they literally won’t be able to tell one. Though, come to think of it — and I mean no disrespect to the experts who uncovered this fun fact — but I’m pretty sure moms already know this trick. At least, my mom sure does. I digress.

According to the University of Tampere’s press release on the study, a team of psychologists from the school unveiled how you can get the truth out of someone who’s lying, by creating an interactive experiment in which participants faced off against one another in a computer game. As per the press release, opponents could see one another through a smart-glass window. As they played, researchers took note of how each opponent moved their eyes — upward or downward — during the course of the game. According to the study's results, direct eye contact from an opponent was enough to reduce lying throughout the game. Coincidence? I think not, and neither do a whole slew of other experts in the space.

"We all know the classic 'tells' that reveal lying: eyes darting back and forth, and failure to make direct eye contact," best-selling author and relationship expert, Susan Winter, tells Elite Daily. These "micro-gestures," she explains, can reveal the discomforts and insecurities of even the most practiced liar. As a result, Winter says, "people who are self-conscious, insecure, or inauthentic will feel uncomfortably exposed when making direct eye contact."

Eye contact, even if it’s fleeting, is a personal connection. Let’s say you’re traveling on a train, and your stop is about to be called. You make your way to the doors to wait for the wheels to slow and come to a stop, and for a second, you look up from the floor, directly into another passenger’s eyes. Now, I know myself, and any time this has happened to me, I’ve laughed nervously and quickly looked away, as if the interaction was just a little too close for comfort.

The same sensation occurs in someone who is lying, says Robert Glatter, M.D., an assistant professor of emergency medicine at Lenox Hill Hospital, Northwell Health. In other words, that direct eye contact makes them feel exposed. "Making eye contact changes the dynamics of an interaction, turning it deeply personal, demanding accountability for their actions and behavior," Glatter tells Elite Daily. "Being direct in this fashion is a power move, and asserts authority, respect, and accountability."

Even if you’re able to suppress a friend or loved one’s lie, though, sometimes just knowing they were about to be dishonest with you can feel like a betrayal. Sure, looking deep into their soul and making them squirm and rethink their story is a win all its own, but if it would make you feel better to confront them straight-up, you should do so. Easier said than done, I know, but just in case these kinds of awkward situations leave you tongue-tied, I asked award-winning therapist Shannon Thomas for some pointers.

"Addressing the obvious discomfort in the other person is better than directly accusing them of lying," Thomas tells Elite Daily. "[If you accuse them of lying], they are likely to become defensive and shift the blame onto you." Instead, she suggests starting the conversation by saying something like, "I notice you are uncomfortable saying this to me and looking directly at me. Why is that?" That way, she says, you won't come off as confrontational; instead, you'll just seem curious and genuinely concerned for the other person.

You could also go a more direct route, Winter adds, but overall, she says it's best to keep the conversation leveled and calm. "Explain to them that you may not like what they have to say, but whatever they say is preferable to a lie. Then, support that statement by remaining rational and grounded as you listen their truth," she says.

Establishing this kind of relationship, Winter explains, will create a solid foundation for honesty in the future.