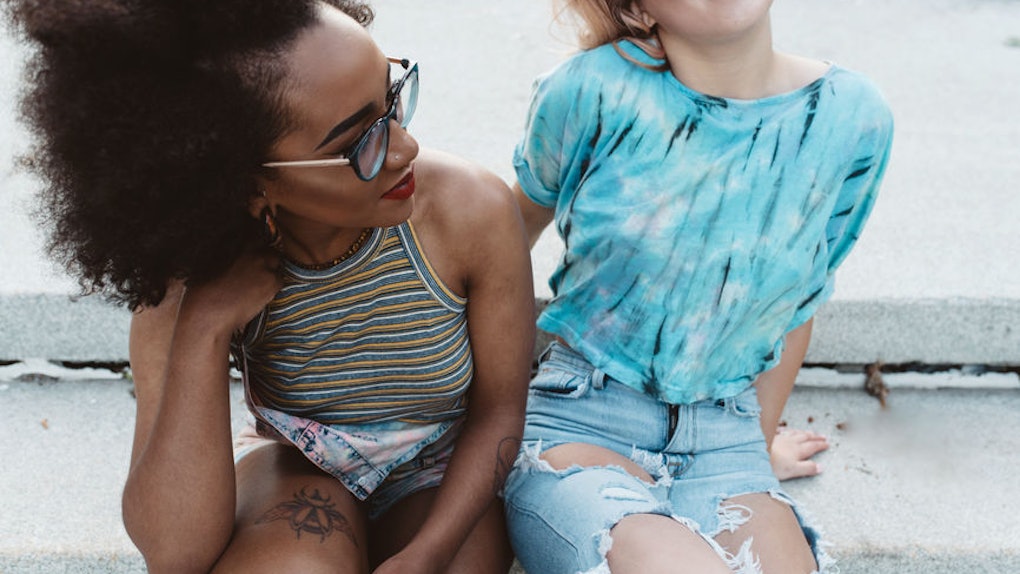 5 Signs Someone Is Lying To You, Because Science Says The Cues Aren't As Clear As You Think

Can you spot a liar from a mile away? Not me — I’m as gullible as they come, and my number one tragic character flaw is that I’ve always been too trusting. According to new research, though, this error in judgment might not totally be all my fault, nor yours if you’ve been duped by a falsity before, too. The reality is, the signs that someone is lying to you can be hard to spot, especially if the person telling a fib has their poker face down pat. Of course, in a perfect world, you and I and everyone else would tell the truth, the whole truth, and nothing but the truth to one another. But alas, that is certainly not the case, so to help you fine-tune your deception radar, I reached out to a few experts in the space to explain what the tell-tale signs of a liar are, and how to identify them before falling for them.

Liars who lie constantly pick up tricks of the trade over time, and that’s why it can be so difficult to separate what’s true from what’s false. The more people lie, the better they are at convincing others that they’re telling the truth, but what’s even more disturbing is that really good liars are also skilled at convincing themselves of their lies, psychologist Dr. Danielle Forshee, LLC tells Elite Daily. And the really good liars, she adds, will even “forget what is a lie and what is true” from time to time. So then the question becomes, if even liars can lie so well they forget their own truth, how in the world are you and I supposed to detect false statements?

As per ScienceDaily, for a recent study published in the Journal of Cognition, researchers from the University of Edinburgh created an interactive game in which 24 pairs of participants listened to over 1,100 statements that had been linked with 19 cues — like changes in speech, eye and eyebrow movement, etc. — that would typically be interpreted as lying. First, listeners had to identify what the signs of lying were; then they had to decide within a few hundred milliseconds whether or not the person really was lying, or telling the truth.

Interestingly enough, the results showed that, even though many of the participants knew what types of cues to look out for in someone who’s lying, those same cues were actually more likely to be used when someone was telling the truth. In other words, you might think you know how to tell when someone is lying based on the preconceived signs you’ve been taught — like shifty eye movement or a sudden stutter in their voice — but you know what they say about assuming things, right?

So, how can you spot a liar from a mile away? Here are a few red flags, according to the experts.

Their Micro-Expressions Trigger Your Gut Feeling

In an online post for the human behavior research lab Science of People, researcher Vanessa Van Edwards defined micro-expressions as "brief, involuntary facial expressions" that naturally occur in tandem with the emotions being experienced. In other words, you can't fake a micro-expression, which is why NYC-based dating and relationship expert, Susan Winter, tells Elite Daily these are fool-proof indicators that what someone's saying is either true or false.

"A micro-gesture is a miniature 'tell' that reveals the opposite of what's being said," Winter explains. "These may seem hard to catch at first, but we internalize them as a 'gut feeling' that we're not hearing the truth."

With that in mind, pay close attention to what's being said, how it's being said, and more specifically, Winter suggests, how the crook of the person's mouth bends. Take note of whether their eyebrows raise, she adds. Basically, if the context of what they're saying doesn't seem to match their facial expressions, that's your first clue.

They Go Into Heavy Detail

You've heard of TMI? Liars are apparently masters at going overboard on details to compensate for a fib, says Winter, but it could end up backfiring if whoever they're trying to convince isn't buying it.

Winter tells Elite Daily that novice liars especially will go into great detail when telling a story, as if to use elaboration as some sort of crutch. Say you ask a friend why they didn't call you back the night before, Winter explains, and you end up getting "an elaborate story filled with unexpected events and dramatic factors." This litany of details, she says, is a dead giveaway that their explanation is a lie.

A Liar's Eyes Will Shift To The Left Before They Fib

In the words of Queen Bey: to the left, to the left. One easy micro-expression to pick up on is that any time anybody lies, Winter says, their eyes are going to flicker to their left. Now how's that for your body betraying you?

"When trying to remember an event, we shift our eyes up and to the right," Winter tells Elite Daily. But when someone lies, she explains, their eyes will instinctually look left. "This is an old-school 'tell.' "It means your partner is telling or is thinking of an excuse," she says.

Again, someone who lies often might not even hesitate to exaggerate the truth, but their body might tell a different story. According to Robert Glatter, M.D., an assistant professor of emergency medicine at Lenox Hill Hospital, Northwell Health, any time you tell a lie, your sympathetic nervous system is activated, which basically just means your body is naturally about to blow up your spot to anyone who's capable of picking up on the more physical signs of lying.

"When the sympathetic nervous system is activated, this may lead to outward physical signs such as sweating, twitching of muscles, pressured speech, and increased muscle tension," Glatter tells Elite Daily over email. "This pent-up energy may be reflected in difficulty sitting still and shifting body positions." In other words, liars have a lot going on internally, so if they aren't extra careful, they could give themselves away.

They Leave You Hanging

The moral of the story here is that liars do not tell the whole truth. Sometimes they'll tell a partial truth, though, or maybe a half, if you're lucky. Avoiding specific topics of conversation, becoming defensive, or avoiding eye contact when a subject comes up, Forshee says, are all indicators that, for one reason or another, the person you're talking to isn't being entirely truthful.

"It’s the adult version of a child running away," Winter adds in regards to a liar's deflection. And if they aren't completely avoiding the subject, Winter says, another line of defense that a liar has up their sleeve is to offer just enough explanation to satisfy, before turning the tables on you.

"He or she shifts the questioning to you. Your partner asks where you were or whom you were with, accuses or attacks you, in order to deflect the heat," Winter explains. Pretty sneaky, huh?